As of the week of March 15th I will be officially picking up the ball from Ed Barreto art wise on Judge Parker for King Features. This is one of those situations where on one hand you are happy and the other sad. I am very happy for the job but unhappy it's because Edwardo was ill. Barreto is retiring for health reasons after a long a really great run on the strip which really lifted the quality of the strip to new heights. I've got big shoes to step into. I've been a fan of Barreto for a long time, from his stint on Atari Force at DC onward through his varied career. He could do it all, super-jocks, pretty chicks, noir, pedestrian, detective stuff. His work had charm class and power. He made JP his own, something I hope to do in time as well.

Doing the "straight" stuff or soap opera strip is a lot harder than super heroes, there are less ways you can cheat or get away with a splash page or some jazzy layouts. But as an artist I am always up for a challenge. Comic strips are the hardest and most disciplined form of comics outside of the gag strip. Three little frames that have to tell an interesting story and capture drama on a pretty small stage these days. Drawing people in suits and locations and all of that really takes time and is hard work. The great artists like Alex Raymond, Stand Drake and Leonard Starr made it look easy, deceptively easy, and that easy is hard. Doing it 365 days a year is also hard and requires a depth of passion and work ethic that many artists are just not up to.
I'm thankful for the help of long time writer Woody Wilson and Brendan Burford in my first few weeks on the strip.

I've always been a big fan of the classic comic strip and have collected original art by some of my heroes like Raymond and Robbins, Drake and Leonard and learned quite a bit about them when I shared the studio of Al Williamson back in the 80's, so I'm looking forward to flexing my art muscles and hope the long time fans warm to my efforts. I'll be posting some more in the next few days and weeks about JP as I move further into the job.
Posted by Mike Manley at 11:38 PM 25 comments: 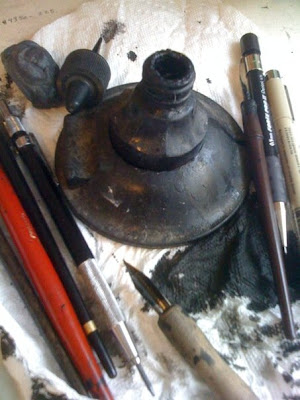 In case any of you regular readers were wondering why there haven't been any posts this week-well I was swamped. There was no school for me this week, I ended up having to take the last week off from school to do a solid, huge block of freelance work. I'm inking about half and issue of Wolverine Origins over Doug Braithwaite, (who's an excellent draughtsman) and I'm ghosting a month of the Judge Parker newspaper strip due to the artist Ed Barreto's illness, plus two other jobs I am not at liberty to discuss, except to say on is based no an early 80's hit Disney movie. I might even have to skip part of this week too, that's not certain yet. I really miss painting but I need to keep the dollars rolling into the studio, school isn't cheap!

Later this week things should be back to normal...
Posted by Mike Manley at 1:38 PM 9 comments: 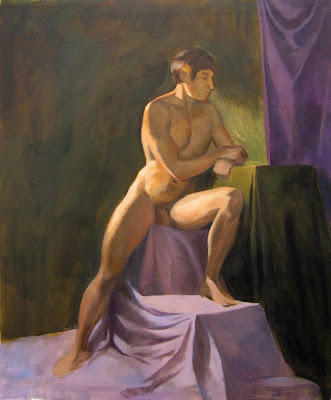 Last Monday I got to work on this painting again, then between freelance work and the winter weather that was it for the rest of the week school wise, and this week doesn't look any better.

I have two more poses with the model but I am not sure I can make it this week due to the heavy does of freelance work, which is really needed. One of the things that is hard about these types of paintings is the huge gap between painting sessions, it's hard to keep focus and more importantly for me that momentum and connection on it. It's a cold start and it often takes a while to get back into the rhythm. I am so glad this is my last semester of these types of classes, I really look forward to my third year come fall.
Posted by Mike Manley at 8:15 PM No comments: 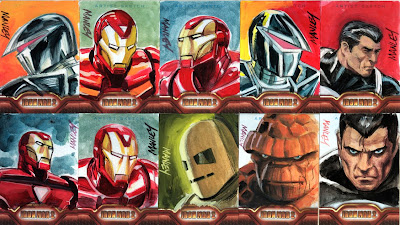 Here is my last batch of cards for this current Upper Deck set.
Posted by Mike Manley at 10:46 PM No comments: 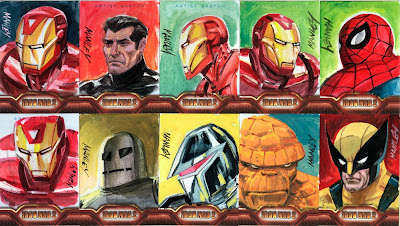 While Old Man Winter buries us here on the east coast I have been taking breaks between shoveling to keep at the drawing board. here is another batch of marvel cards for Upper Deck, i have a few left to do and they'll be done in another day or so. In the meantime it's back to the board and the shovel!
Posted by Mike Manley at 8:33 PM 1 comment: 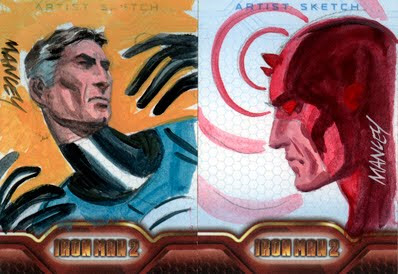 here's another batch of sketch cards for the Upper Deck set. 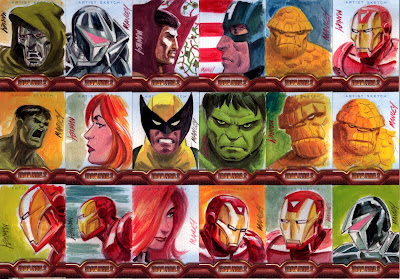 Posted by Mike Manley at 1:04 AM No comments: 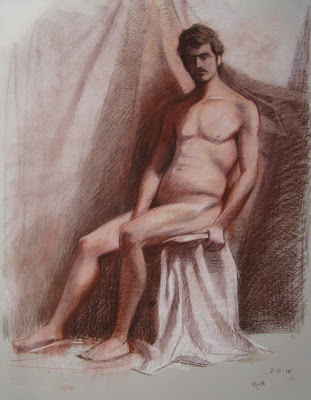 Well the second full week flew y at school, here is a drawing did in Sidney Goodman's life drawing class. It's in pastel on Rives BFK. I'll admit, at first I was hesitant to take Goodman's class, but I am glad i did so far, he had some very helpful pointers about my drawing. I also liked our model who looked like somebody out of a John Singer Sargent drawing or painting.
Posted by Mike Manley at 3:16 AM No comments: 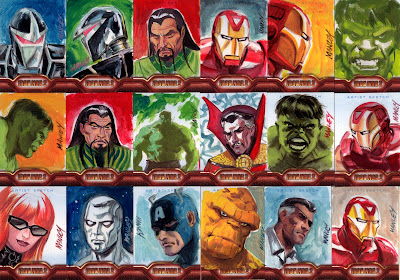 Here is another batch of Marvel Sketch Cards, I'm more than halfway done and have a bunch more penciled out. It's a fun job and I'm getting better painting Ironman's head with each one.
Posted by Mike Manley at 12:54 AM 5 comments: 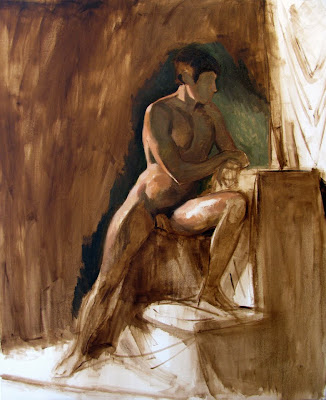 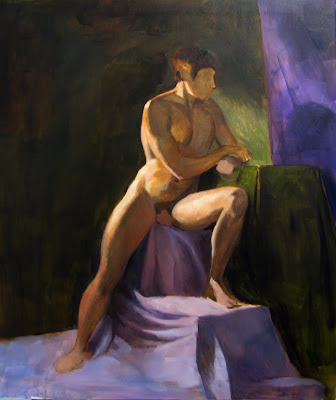 School is going by quickly and I am finishing the second full week. My painting of Alina, the girl on the sofa which you can see earlier on the blog--didn't make it into the spring show at school, but I did get great news last week about a show of my work, so you have to take the good and the bad and realize that shows that reject your work doesn't mean that the work is bad. Who knows what judges look at, or what their own tastes or prejudices are. I often don't agree with the tastes of the judges and the work chosen at the school shows. Their is now maybe more than before a scism between the figurative and non-figurative camps within the school. There is a push I think to make PAFA more like other art school and less traditional, which I strongly disagree with. The introduction of PAFA's own BFA has attributed to this issue in my opinion. The whole point of PAFA is tradition! Let other art schools take the reigns of the last 60 years of crappy art education and shit on drawing and painting in the quest for the triumph of the idea over craft school of art.
Posted by Mike Manley at 5:55 AM 2 comments:

Here are bunch of sketch cards I am doing for the Marvel Ironman 2 Upper Deck set, they are mostly executed in gouache. I'm doing 100 cards in all for this set. 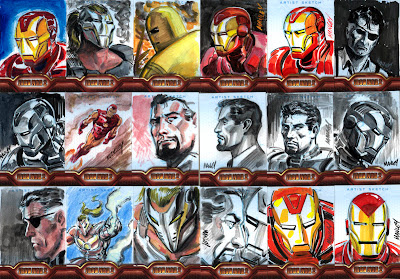 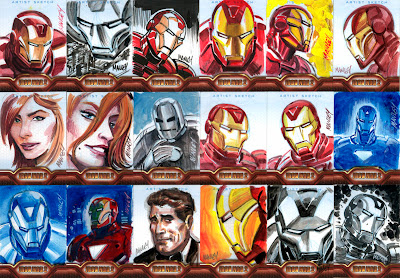 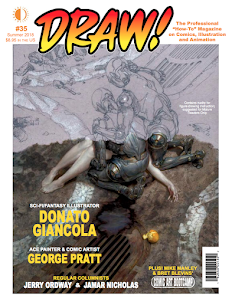