Boy, this week has really been a busy one here at Manley studios. I just finished cranking away on my storyboard roughs for Venture Brothers Season two. It was fun but man, a lot of work since I'm doing half of the episode. As I was finishing batches of the board roughs earlier in the week my part time assistant Bonia would scan them in for me so I could later FTP them over to Noodle Soup and Chris the director. My pal Scott was down as well, so at times all three of us sat at my dinning room table drawing and listening to music as I roughed out my board. That's fun and I enjoyed having teh company while I worked.

later on in the day I'd switch hats and have to jump on drawing and sketching for my 'top secret' project that I guess I can say is for Nicalodeon. Eventually I'll be able to say exactly what it is, but for now it'll have to emain a secret. But this meant between those two projects and working on DRAW! (interviewed Kyle Baker this week) I was working 16 hour days so I didn't get much of a chance to do anything blog-wise this week, though I did do some noodeling and sketching every day to warm up, even though with the little sleep I was getting meant the engeine never really cooled down. 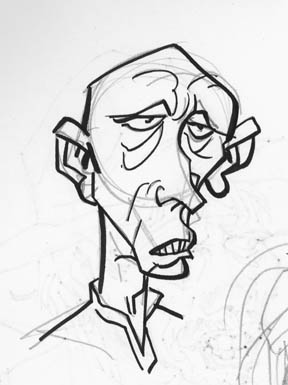 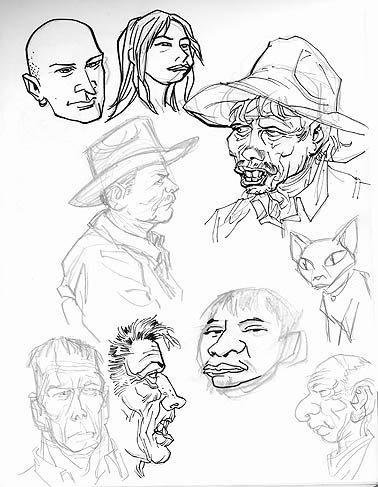 Next week will be another heavy week of work but less "crunchy" deadline wise, but I'll be putting together my Class work since my classes at DCAD begin the following Tuesday. Now I have to do all the things I didn't do like pay bills and laundry that i didn't do while slaving for the man.

I've also been enjoying Galactica this season as well as Bill Maher's return to HBO.
Posted by Mike Manley at 2:04 PM 2 comments: 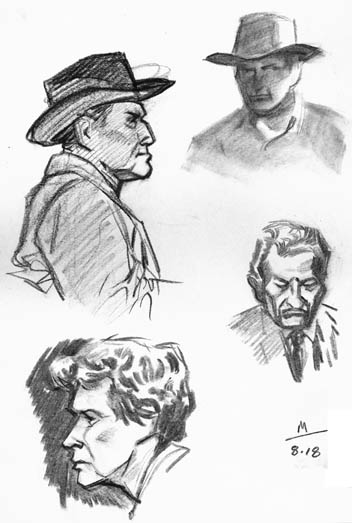 Some looser sketches today, been cranking on some other things like Venture Brothers boards and my "secret project", so I need to get back to some more serious drawing this week for myself. Summer 2005 is just about in the record books as they say, and overall it's been a good summer, seems it goes faster every year, it was just a bit over a month agao I got back from San Diego. 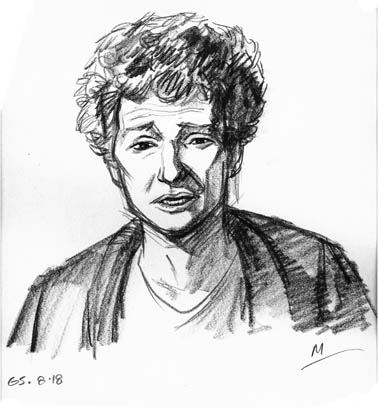 Something a bit looser today as I am tired. I've been storyboarding plus designing another project which is 100% diffrent than doing these tonal drawings I've been posting here, so gears were grinding today as I've been working some late hours this wek. Today's offering is the sketch of the lady above, which I did while on the phone this afternoon. She looks like I feel today...maybe that's why I drew her?
Posted by Mike Manley at 6:29 PM 3 comments: 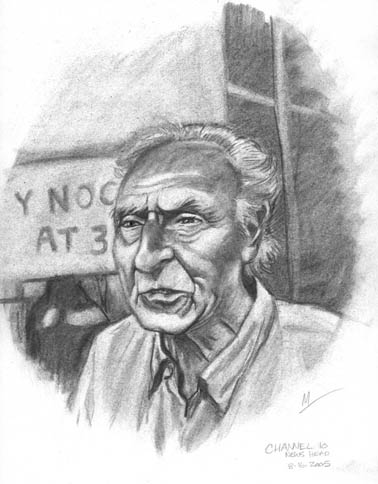 This is a study of some old guy on the news today, I TIVOed and set to sketch'n, you can see a bigger version here. I worked reverse on this one, toning the paper first then wiped out the highlights and then plusing the tones where needed. It's ok, I like parts, but it's less chiseled...
Posted by Mike Manley at 12:04 AM No comments: 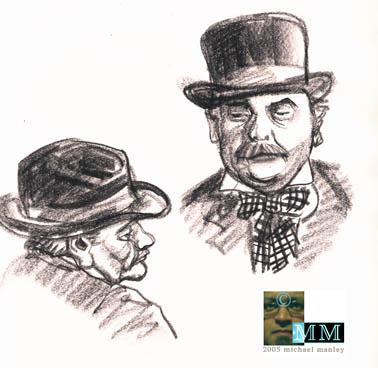 Some rougher sketches today.
Posted by Mike Manley at 12:20 AM No comments:

Another TV study-sketch in vine charcoal from Gunsmoke-via my DVR. It's a little flat and the eyes are not quite there...he has uneven eyes, like the mad guy,oh well. Onto the next drawing.
Posted by Mike Manley at 12:30 AM 5 comments: 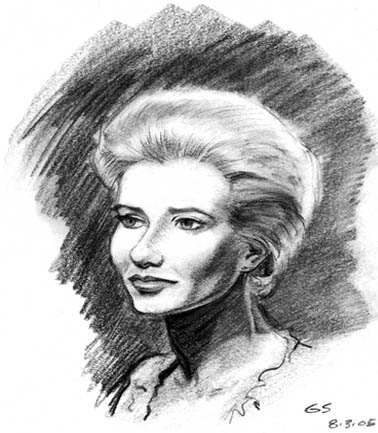 Another sketch from Gunsmoke via the DVR and by TV. this one us much less successful than the first drawing I did yesterday, I was tired and I think it shows, so many little things off with it and it's a bit too "tight", not enough air in this drawing. Oh well, thank God there is a lot more paper in the world.

We take the good with the bad and hope we learn from the bad.
Posted by Mike Manley at 12:42 PM 1 comment: 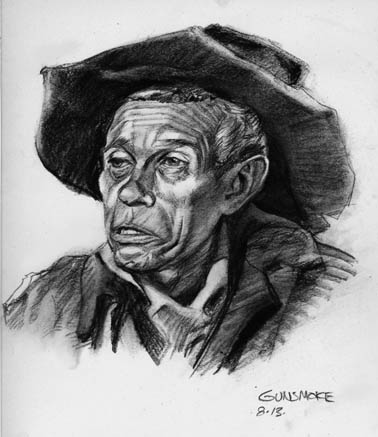 It seems like forever since I had time to draw with so much other stuff going on, but this weekend I am back into the stream, working on personal projects and another bigger project I can't go much into now, but hope to soon.

Anyway one of the things I have been restless about is moving ahead with more personal art or comics away from the commercial needs to make a living. Though I still need to do that. Spending time out west this summer and looking at the art in many galleries has only reinforced this. So I am embarking on a journey and I don't know exactly where I'll end up with this stuff, but I am moving ahead, but I know it's something I have to do artistically, something that I feel is vital to my developemnet as an artist. last year I would comment to my students that I was a bit envious o them in regaurds to being able to do so much life drawing, something that my work schedule makes difficult at times, though I am committed to doing it, maybe taking a day class in Philly or just hiring a model. Drawing the figure well is the root of the tree, and the better you draw it the better all other aspects of you art will be.

The sketch above was done in about an hour or so? while my TV was paused. I was just working on it till I was happy and I was basically using my ON DEMAN cable and my big screen TV as a way to use a model. I've drawn from the TV many times before, doing quick doodles. I can record on my DVR like TIVO, so I have been getting into Gunsmoke, the old TV show because it had great lighting. So many old TV shows, especially B/W ones were light so well because many of the old hollywood craftsmen were moving into TV back in the 50's and 60's, bringing their sense of craft from the movies.

It's sort of funny because I watched a few episodes of Gunsmoke ( which I hated as a kid) on night as a lark after I had watched a Spaghetti westen one day on the Western Channel. I was struck by how well it was lit and how many great cool old character actors they had...I wanted to start drawing right then and there. So what I did was "record' a bunch of shows with the aim of searching through and using cool shots to sketc from. TV does tend to flatten things a bit, and it's not like using you eyes to see 3D from a life modle, but the shows being in B/W and lit so well it was a sort of cheap way to use a model. I will continue to 'sketch ' from the shows. the cool old character actors, are something you don't see much in modern films, Steve Buscemi sort being one of the only throwbacks working today.

When I ate lunch yesterday after dropping off stuff at my accoutant it was a really unstaisfying eating experience. I had movies to return and the movie place is in a mall that has a used book store, a super market, a Staples and the Manoa Diner. I was starving so I decided to eat first shop later. Well let me tell you friends, this place was something out of the Twilight zone. Besides myself there we only 2 other people eating under 70 in the place. it was like the Planet of Old people, and what frigg'n weird old people they were! It was like Dan Clowes and Robert Crumb had made a diner in the twilight zone!

I snapped some pics with my handy cel phone and I think the result of this terrible meal the strange conversations and the weirdo's are going to be put into a comic.

The end is so close it gives me paper cuts 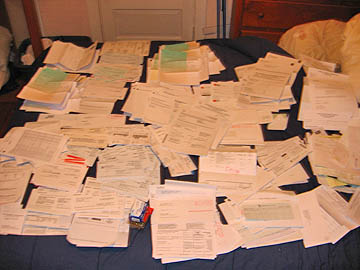 Boy, it's been like accoutants on steroids around here the last week or so, but tonite the last box of taxes is done and off to my real accoutant! Sheesh! This was also an excuse to trash lots of other junk and move other stuff to be sorted week by week until it's gone. I get soooo much paper generated with each job, especially on storyboards, plus just all the mail and crap I get that it's a huge bunch of boxes filled between the boards in various stages, roughs, finishes, model sheets, dang it all...

It really piles up over a year or so, and it has to be delt with, can't have Venture Brothers mixing with Fairly Odd Parents. I have a new filing cabinet coming from staples as well. It's a constant battle to stay ahead of the paper tsunami, and I don't have a secretary. But by tomorrow I'll be back at the drawing board, I'm rearanging my work studio (I have two, one bedroom is the drawing room, one is the computer room) too include a set-up for painting still lifes and landscapes. When I get something done I like I'll post it.
Posted by Mike Manley at 10:15 PM 3 comments:

The weather was nice here for a spell after the nasty heat wave, but the heat is building back up and the airconditioner in the studio just went, or the fan went, so I need a new one...great!

Still cleaning up and organizing here the last few days, so much to toss, sort and look through. I can only do it so long before my brain gets tired. Ugh!

Plans are being drawn, not so much drawing as of late, but there will be lots of drawing by the end of the week.
Posted by Mike Manley at 3:45 PM 1 comment: