Back to School Week 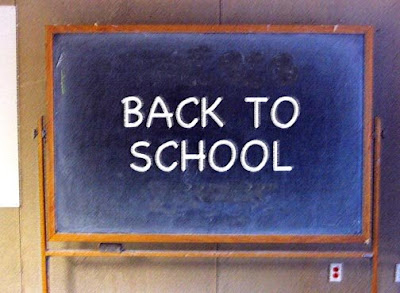 This was my first week back at school at PAFA and it was quite nice to be back in the swing of things. It seems that summer blended right into fall for me with literally less than a week break between school and work.

This week I start teaching Storyboarding to the second year students at DCAD again, next week I start teaching the same to the Uarts crowd. Add in my regular workload of freelance and my 4 day schedule at PAFA and I'm one busy artist! In past years I've had a bit of a break during the summers, but not this year. No cons, no Arizona trip, just lots of drawing and teaching, but you know, that's cool. i need the money and being super-busy is good at times when one's personal life has ups and downs, and 2008 has been a doozy.

This week I was also happy to be able to attend the demo give by Nelson Shanks over at his Studio Incominati It was a pretty packed house to watch Shank's portrait demo, and a learning exoerience too. I went along with 4-5 fellow students from PAFA, and I snapped a ton of pics and my buddy Dave took notes. It's always a great thing to watch someone very good perform, like a musician or an athlete; but one hardly ever gets to see an artist perform live.
You can learn a lot by seeing not only their palette, but their manner, application of paint, but in Shanks case you see how much he looks, how much he "sees" during his process. I'd say out of the nearly 4 hour demo , half the time was him really looking and seeing and thinking, before he would make a decision and then a stroke. That right there I think is something so many younger or inexperienced painters don't do. Myslf included. Sometimes, especially in class you feel like you have to "rush", or passion grabs you and off you go. I noticed that Shanks paced himself, he seemed to always be in the same energy painting, from start to finish. 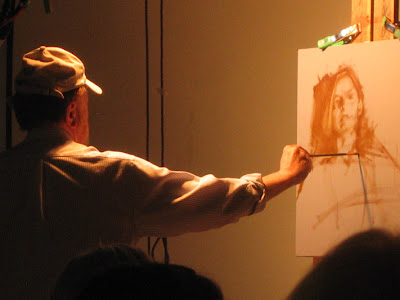 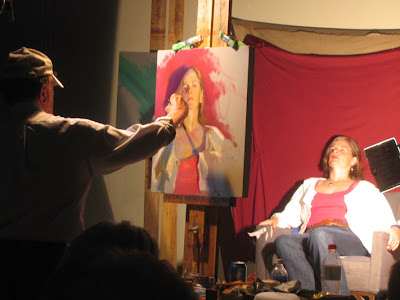 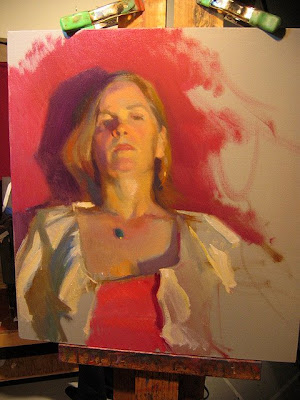 I liked his finished picture better than most of his more finished pieces because it had a vitality to it, there was something left open, questions that the viewer could answer that to me his work sometimes lacks because of that super-finish he puts on everything.
However that is exactly the thing I'm sure most people admire about his work. 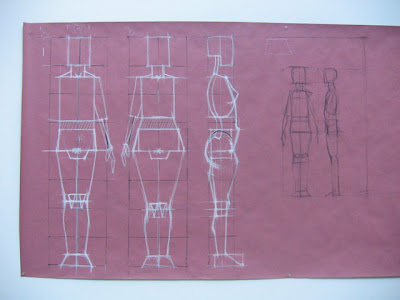 Thursday i had my first real class, John Horn's 2D anatomy class. John is such a good teacher, very calm, clear and has an easy manner about him, you can tell he's been teaching a long time. He also has a great subtle sense of humor. I look forward to having all my classes this semester and finally moving into my second year next spring. I'll be regularly posting my weekly progress here, so keep checking back. The semester is off to a great start!
Posted by Mike Manley at 3:51 PM 1 comment:

Here is the September installment of the Creepertins.
Posted by Mike Manley at 2:18 AM No comments: 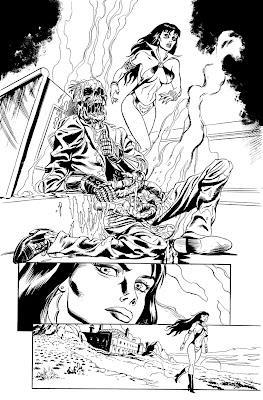 The splash to Vampy, penciled by Heebink and inked by me.


Boy I know I often I say I am busy here,but recently things had super-heated into a huge ball of work. Now all of my CE teaching has ended for the summer, my last classes were last week. I had a good crop of students this semester and everyone was making good progress, for some using a pen or a brush for the first time.

I also finished up my inking over my buddy John Heebink's pencils for Vampirella, which should be out in October, for Halloween. I also inked my first Secret Saturday's job, which should also be out around then.

After catching up on a few straggling things here I'll take a few days vacation before school starts all over again. I do look forward to going back to class myself though. I didn't get to do all the painting I wanted this summer.
Posted by Mike Manley at 7:42 PM 4 comments:

The wonders of Youtube never cease. It turns out that at least two of the episodes I storyboarded for Growing Up Creepie are are up on the site. Of all the episodes I did I think this one is the best and the one I think you might be able to tell I storyboarded.
Posted by Mike Manley at 9:38 AM No comments: The last few weeks have here in the studio have been very busy, yet sort of have a random, slow end of the summer gate to them. The days have the steady gate of a work horse in the studio, between working on Brave and the Bold, doing upwards of 30 character designs a week, there is now the mix of comic jobs like the Secret Saturdays and now Vampirella. It appears that I might end up inking my Secret Sat job because Jay Stephens can, due to some recent health issues.

It also seems that summer goes faster after the 4th of July that it does before, or at least to me. This is also the first summer where I taught CE classes during the break, so in a lot of ways I had no summer break this year. In a month from today I'll be back teaching and back in school at PAFA, already the Halloween candy is invading the isles of the local supermarkets and has been for over a week it seems.

I'll have a few weeks after my classes all end where I will finally have a little vacation and might spend a few days in Michigan with my parents and maybe in NYC to see some museums. I saw Dark Knight and Hellboy, I enjoyed both, but I was not blown over by either of them. I thought both were too long and would have been better if they had 20+ minutes cut and had way better staging during the fights/action sequences, the hallmark of superhero films.

It seems the Brave and the Bold preview has gone over well and was well received at the SDCC where it premiered. I wish I could show a lot of what I am working on, but I can't--so you'll all have to wait till next year when it comes out. Any week now the Secret Saturdays will be premiering on Cartoon Network and so far I've caught one episode on the new season of the Venture Brothers. I missed most of last season and noticed they have changed Brock's model a bit and the have a bigger budget as the show looks even better.

I haven't been buying hardly any comics at all, but I did enjoy the art on the Marvel Sky Doll reprint and the Punisher book by Gorlon Parlov, Scalped and the Johna hex comic with the awesome art by Jordi Bernet. But the best comic so far I've read this year, or even longer for that matter is Three Shadows by Cyril Pedrosa and published by First Second. Great art, good story--great storytelling and such a handsome looking book! It's French of course, they still seem to do the best comics to me, or the ones I find that overall use the medium the best. Pedrosa is a former animator, for Disney, and that is very obvious from the great staging, posing and acting all of his characters do. He also employs an awesome dry-brush technique. I can't recommend it enough.

You can also see what I am listening to on my last FM feed to the right. Most mornings I listen to WNYC up until Fresh Air with Terry GRoss in the afternoons, then it's usually Itunes the rest of the day, switching between stations like Fistful of Soundtracks, Radio Deliro, etc.

Well, I suppose that's enough randomness for one post, I'll leave you all with a page from the Vampirella comics I'm inking over my great buddy John Heebink, which will be out for Halloween.
Posted by Mike Manley at 10:16 AM 2 comments: