As those of you who follow my blog know, I have been taking an anatomy class for credit at The Pennsylvania Academy of Fine Arts. I plan on attending this fall to finish my BFA. The class, run by the knowledgeable and affable Joe Kaplan is fun as well as informative, and I have to say, it's great to be taught instead of teach. I know my anatomy pretty well, but I am learning it in specifics even better. Now most of my students complain about homework, but I requested Joe to give me homework,as I really want to get good critiques, take advantage of the great resources at PAFA, so L'Ecorché was the first assignment. They have a life size repro of a famouse french L'Ecorché in the Cast hall, so I rode in early this morning with Echo and drew this before the class. Joe wanted me to draw the back view since this is what we have been studying in class. It's in charcoal on newsprint. On our break Joe critiqued my drawing and was spot on, it's very illustrative, not a fine art drawing, which I guess I did on purpose, as a result he wants me to take another crack at it next week and try this time to not be so literal.
Posted by Mike Manley at 11:29 PM 5 comments:

Boy, some weeks start with a lumpy Monday and build to the crescendo of Friday, and this week I am looking forward to Friday! Monday started good actually, I had my first class at the Academy and it was great! It turns out my teacher, Joe Kaplan is actually a nieghbor of mine, living just down the block on the next street--and infact I saw him taking out a portfolio and art bin from his car which was parked in front of my house last fall and thinking, "Hey, I bet that guy's an artist". But he seemed in a rush so I didn't step out to ask. When we were talking after class and leaving I mentioned I lived in Upper Darby and he said he did too and then--POP! we recognized each other. He said "You're the guy who gives out comics evey Halloween!" And I said " I saw you taking your gear out of you car last fall."
How funny is that? Echo was in school at the same time so that was fun too. These were all 20 second poses! Joe had us cooking! After these he gave his lecture, this time on the spine and shoulder, then we did another drawing session of 20 minutes, the drawing below was what I got down in about 15-20 minutes. We stopped on the way home at the market to grab some food and stuff and got home, ate and chilled infront of the tube for a bit. When Echo went back out to get a back from School she left in my car it was ...GONE!

Yep, my 1996 Jeep Grand Cherokee was "Gone in 60 seconds." Or within 2 hours of us getting home. Now I am pissed, sure, but pissed off more because I've just spent about $900 with new tires, inspection and having a short in the electrical system fixed! I also come to find that those 94-96 jeeps are easy to steal. A teacher at DCAD told me her's was stolen 3 times from her house. So now I wait, either the police will find it, or it may have been cut-up in some illegal Chop-Shop in Philly already. I will wait a week or two and then I'll have to get a new car. I have been eyeing a Honda Element.

So what a mixed week so far and we are just at Hump Day. Work continues to be really heavy, and will be for the next month or so, then? Probably just a sbusy after. On the board this week Turtles, Superman and X-9. I'll try and post some stuff latyer on.
Posted by Mike Manley at 5:08 PM 5 comments: 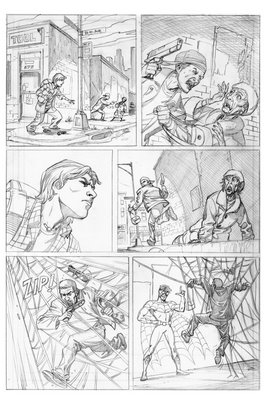 The page above is for the Free Comic book day comic that Twomorrows is putting out this year, and Draw! will have a section on figure drawing by Bret Blevins and a chapter on storytelling by me. Bret and I also did the cover which I'll post a little later on,
Posted by Mike Manley at 2:42 AM 3 comments:

Tonight was a busy night for me in Center City Philly. After busting hump all day in the studio I hopped the EL down to The Academy and met up with Echo as she was finishing her Cast Drawing Class, and I got my student ID for the school so I can start Monday with my CE Anatomy Class.

Next we attended the Student show opening in the Student Gallery which was pretty good. As usual it's a mixed bag, some really good strong peices and some that make you scratch your head. Then we hopped in the car, drove a few blocks over and parked and walked over to the Hewman Gallery on Walnut and 17th, but it was closed, dang it! I went there because I heard they had a few Dean Cornwell pieces, since were closed I'll have to go back.

Then we walked around the block to the Gross McCleaf gallery to see a new show which featured work by some of the teachers at the Academy, and one artist in particular who's work I've admired for a few years, Scott Noel, who just happens to be one of Echo's teachers. She introduced us and we chatted in the back of the gallery as he pulled out some paintings that were not hanging in the show and we talked a while about "north light", lead white vs titanium white and he explained about how he approached and worked on some of his paintings. It was great for me as I came across Noel's work a year or so back via some web searches I did on Philly area painters. I was immediately taken with his work and hoped to be able to take classes from him somehow. It looks like that will happen now as I plan on attending school at the Accademy where he teaches next September.

Chuck is mostly known world wide for his electronic music as well as being the host of Stars End, the oldest electronic music show in the wolrd which runs Saturday nights on WXPN. Chuck's show of graveyards and statuary taken with infra-red film are haunty, evocative and very inviting at the same time. Echo said the picture made her feel like she wanted to be in them so she could see what everything in heaven might look like. Then we hooked up with my pal Steve and headed over to his cousin Effi's greek resturant on Pine and 12th for some awesome food. Echo and I had the lamd---mmmm-m. We were all done in from the walking all over the city, the excitement of meeting the artists and seeing such cool art--and my feet were dog tired,but it was fun despite the blustery cold wind. Seeing good art and meeting nice people always leaves one charged up.
Posted by Mike Manley at 1:40 AM 1 comment: 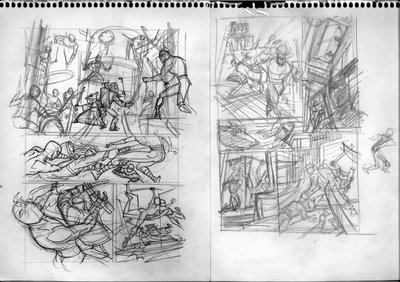 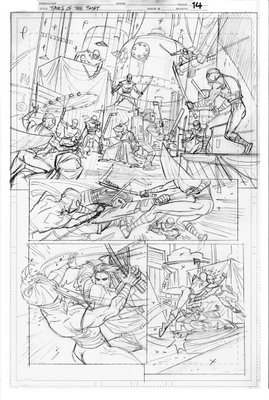 Here are some layouts as well my final penciled page for the Turtles issue I am working on. This is how tightly I have to pencil for myself to ink.


It's been a few weeks since I have posted anything here, with the holidays I took a bit of a break to spend with family, friends and to reflect on the last year as well as the new one, but I also have been quite busy with work, much of I can't post here for editorial reasons. I just finished doing breakdowns on an issue of Aquaman, #49 to be exact. My pal Ricardo Villagran will be doing finishes just like he did so often on my work back in the day at Marvel. Ric also penciled and inked the previous issue #48 all by himself. The script by Kurt Busiek was a lot of fun to work on, one of the best scripts I've had the pleasure of illustrating in my career. The good spin out of this is that Kurt as well as DC was so happy with my work on Aquaman that they have offered me an issue of Superman to pencil. I'll be starting on that ASAP, I don't know exactly when it will be scheduled though.

Between my comic jobs and my Draw! mag projects (working on 14,15 now) plus my DVD project and figure drawing book, plus I start teaching next week again at DCAD as well as attending a class at the Pennsylvania Accademy of Fine Art, where I plan to attend full time next fall to finish my BFA in Painting. I'll be busier I think this year than I have maybe ever been, but that's good, I see 2007 a building year both personally and artistically. My fiance Echo is already attending PAFA and really enjoying it, I have to say I'm kinda' jealous, wishing I was enrolled there now myself, but August will be here soon enough, hell, we're already halfway through January!

I think this year will be a bigger return for me to drawing comics, a recommitment to myself as an artist, to push myself even harder there to meet the personal goals I have. I have to say I'm more excited about that than I have been in years.
I have a book planned with greg thompson I plan to start on next month. We don't have a publisher yet, we might approach Image or even Dark Horse, that is to be decided once the first issue is to bed.

With all the bullshit in the world you have to try some days to stay positive, thank god the dems won and kicked the conservatives and bush in the nutsacks! I just hope we can spin the ball more positive overall in 2007.
Posted by Mike Manley at 6:39 PM 1 comment: