My freind and assitantBonaia has a photo update on her blog that covers some of our trip this weekend.
Posted by Mike Manley at 12:12 PM 2 comments:

Well we had a great time in NYC this weekend but never made it to the show for the reasons posted last time. It seems the show was poorly managed, and many people including our crew were denied access, tickets etc. We decided early Sunday to just bag the whole thing after reading many reports of the conditions at the show and talking to a few who attempted to get in, and so we hung in Queens as you had to have 3-day passes anyway to even attempt to get into the show. In the beginning we are kinda' disapointed, but then we weren't. This mismanagement of the con is so typical of the type of problems comics faces as an industry, and frankly I used to find it very depressing our industry is often so poorly managed. But now I just sort of watch the wreck from across the median. The industry has major, major issues, but many of the people in a position to try and make these things better don't seem to care, and it's mostly the big companes who can have a big influence here. The blustery, cold conditions kept us from hiking back to wander the city, so we watched some movies, sketched and had fun at Scott and Ryan's place.

Will I attempt to do the show next year?

Unless I hear they really fixed things, I doubt it.

This type of bebackle only makes me appreciate fun and smoothly run shows like the Baltimore Con run by Marc Nathan even more. It seems the convention aspect of the industry is growing, but this is two weeks in a row where the way this part of the industry is run leaves a lot to be desired and a lot of angry people as a result. Last week was the mad scramble for San Diego Hotels, with the usual booking headache, this week an oversold show and an too, small venue. What I don't understand in the case of the NYC show is this: since the Fire Marshall must have posted or stated the amount of people allowed in a show with that size a floor, and if so, how could the company managing the con not know that they had pre-oversold the show before hand?

Well back to a full work week on Fear Agent, Minoriteam and Acting With A pencil now that DRAW! 12 is going to the printers...Hooray!
Posted by Mike Manley at 9:10 AM No comments:

We arrived in Queens yesterday after a delay in leaving Philly due the battery in my car dying, so we had to take Echo's car up.

When we arrived at Scott and Ryan's place in Queens we relaxed for a few and just when we were getting ready to leave for the Con at the Javits, Ryan got a call saying the show was turning people away, and not selling any new tickets. It seems the old problem many NYC shows have (Too small a venue, not enough pre-planning, too many people) cause the Fire marshall to shut the show to new people. I heard from a few pals who tired to get in and were turned away many people were angry, having bought tickets ahead of time (prepaying the whole weekend, pros included) only to be essentailly locked out because the crowd was too big. People were being issued refunds. So I don't know if we will even be able to make it in today.

Not a good first show for sure, but typical it seems for comics in so many way. Poor planning hurts the business in many ways. This type of thing doomed the Fred Greenberg shows, the last big show in NYC in the late 90's. How many fans or normals will be discouraged from trying a con in NYC after this?

We are preparing here to head up to the NY Comic con this weekend at the Javitz, but I am already sorta' in a bad mood about the show due to the hassel of professional registration. Why is it so difficult at times to run things smoothly?

I'll report back here with a full rundown on the con.
Posted by Mike Manley at 10:00 PM 2 comments:

These are some of the mini-ddoles I've done while waiting at the local diner, which is full of cool, old, ugly and weird people. I draw these fast, like snap-shot-sketches...'casue weird people know when you are drawing them. These are drawn in these little journal/sketchpads I got at Target, 6 for $5. Drawn direct in brush marker 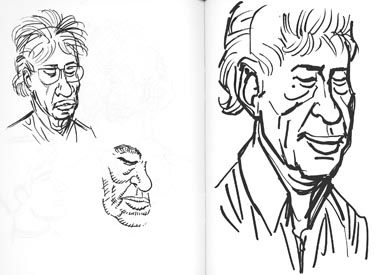 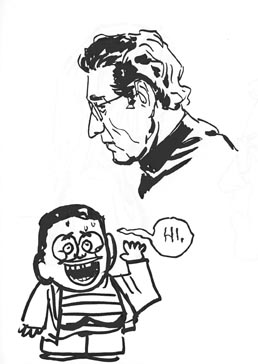 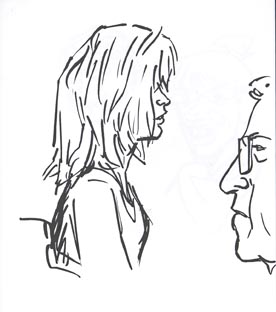 And the floozie talking to him 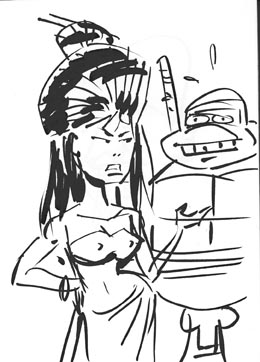 No, the Turtles were no there, except in my imagination.....
Posted by Mike Manley at 9:26 PM 1 comment: 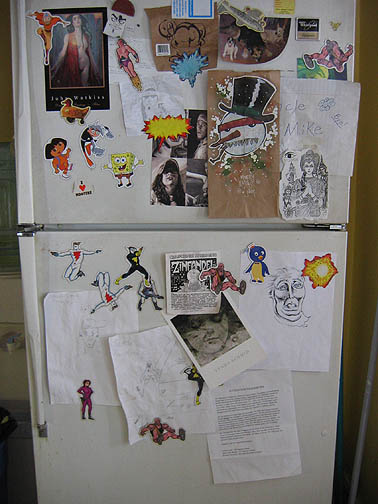 Everyone has weird or cool stuff on thier fridge door, this is what's hanging on mine.
Posted by Mike Manley at 10:41 AM 4 comments:

I have been locked out of Blogger until today, for some reason the last few days I have been unable to post, but that seems to be fixed now.

So here are a few pics from the storm aftermath... 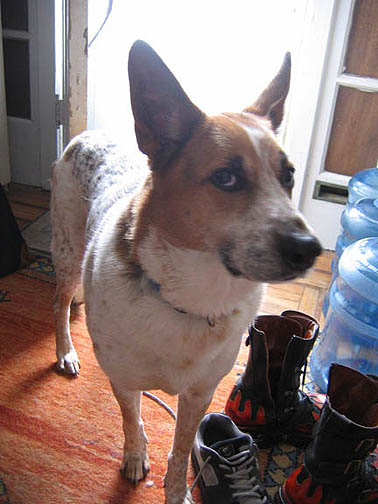 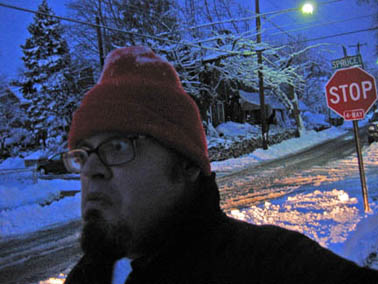 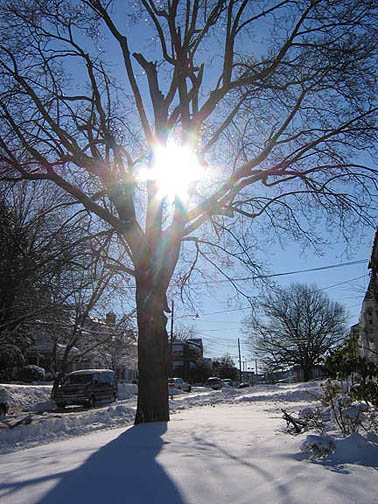 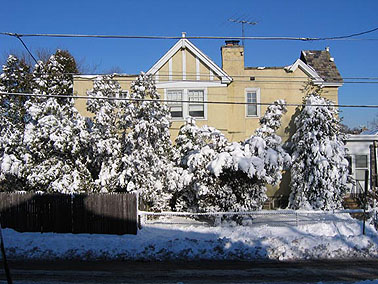 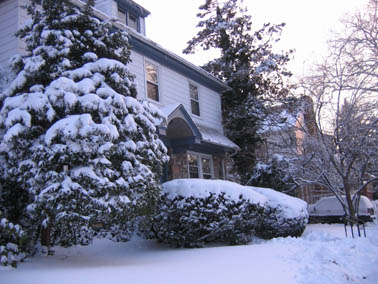 Oldman Winter is kicking the can! A few minutes ago it was Thundersnowing here. A huge flash of lightning then BOOM!
the snow was really coming down then. 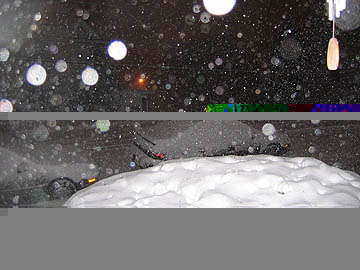 I snapped a few more pics real quick as the storm rages... 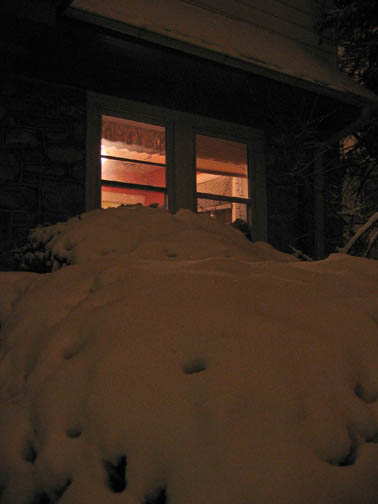 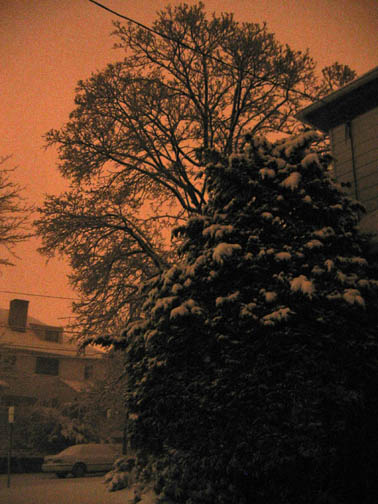 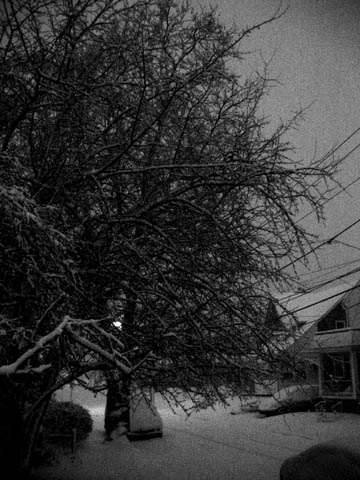 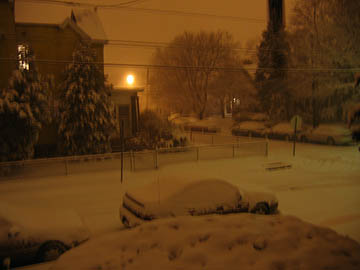 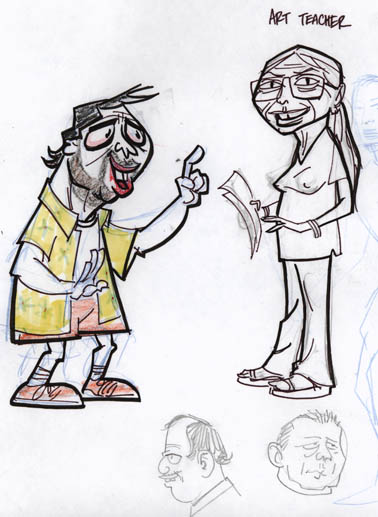 Some old doodles I came across.
Posted by Mike Manley at 11:44 AM 1 comment:

It seems I've been doing a lot of corporate comic type work latel with storyboards for Six Flags and doing finishes on another comic for a California company. Here is a page I inked over Kieron Dwyer's pencils from the job I was jamming out last weekend for a Mr. Panosian 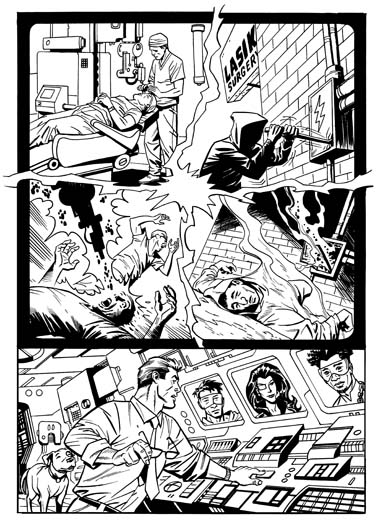 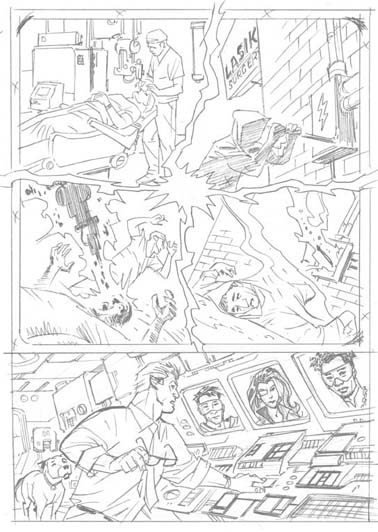 Still pecking away at issue#3 of Fear Agent, so I thought I'd give you another peak into my process. First Tony sends me his layout which he draws at repro size ( comic book size) and then I take it into photoshop and convert it to non-photo blue under the Duotone selection in the MODE menu. I have it preset to the blue I want, and I adjust it manually based on how dark or detailed the pencils are using the hue and saturation settings. One I have the page the proper blue I print it out via Quark as I have a preset comic page layout which I use, and print the layout 10 x 15 on comic board. I have detailed this process before. 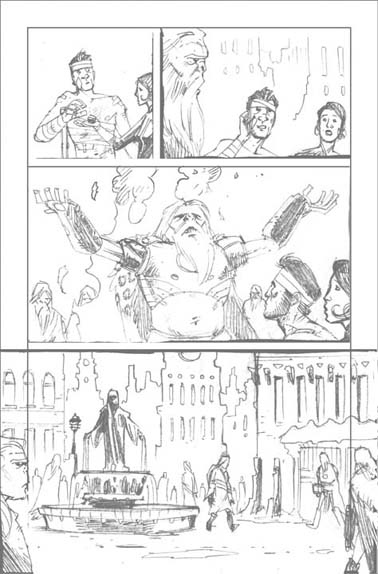 And my finished page, with some of the Backgrounds finished by my assistant Bonaia. 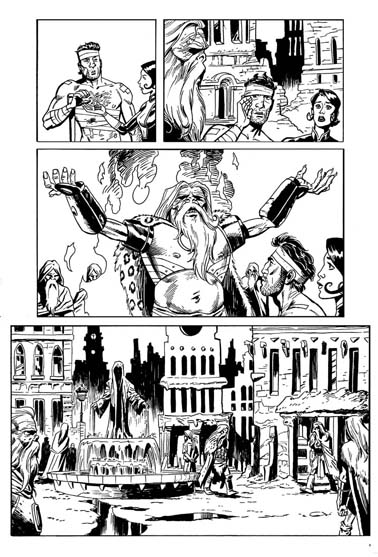 You can see a larger version here.
Posted by Mike Manley at 9:51 AM 1 comment: