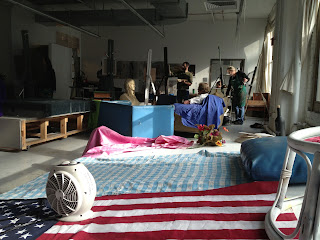 We are down to the final full week of school before the reviews and final critics start for the spring semester and the end of my first year in the MFA at PAFA. Its been a fast semester, faster than the Fall semester it seems, but I feel better about the work I have going in the studio and all of my critics have been reacting really positively to it as a body of work. I have 3 more paintings in progress to finish for my final review so I feel like I will have a good finish without lost of crazy hand-wringing or nail biting that the MFA 2's are having with their graduate show. I get to do that next year. But the weeks none the less sping by fast and I haven't had as much time to blog about things as each weekend is jammed with activity, either catching up on my main gig, writing a paper or painting over at my friend's place in New Jersey with our Sunday painting group. 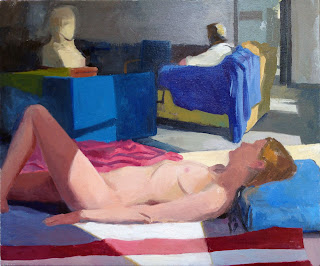 This was the last painting I did in Scott Noel's master's painting class. I wish I had more time on this as I really liked how it was developing. You can see a picture of the setup at the top of the blog. This was my favorite set-up all semester with the light cutting into the room and across the figures. But thats the way it goes with classroom work, I never quite get to the final spot I want with the paintings. 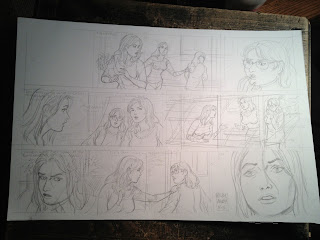 But no matter what else is going on I am staying up with my regular gig on Judge Parker. Here is a shot of a up coming Sunday strip in the pencil stage. There has a been a bit of a buzz about how I depict the female members of the cast, or how I depict their breasts in what I have come to call "Nipple gate". It required me to make a few changes to a few strips that were deemed a bit too sexy for the comics page--which I find in a way very funny when you think about the crazy shit you see elsewhere in the papers--including Celebrity Nip Slips and all kinds of other junk. But in a way its good for a little controversy or having the readers perk up over such small things as it proves people are paying attention to the strip. 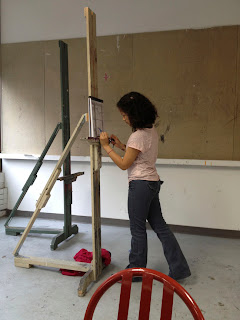 I continue to teach the Illustration Class in the After School Program, and one of te students has just been accepted into the Certificate program at PAFA for the fall, which is great! We have a core group of dedicated students who show up every week and it's great to see and mentor them through their projects which are all coming to a finish in the last few weeks. 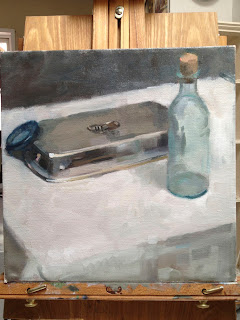 I also was able to fit in a workshop with Jon Redmond the same week I took the workshop with Ken Kewley. Jon is a great painter and a good teacher as well as a fellow grad from PAFA. The painting above is the painting I completed in the two-day workshop with Jon. Jon's method of working is similar to many of the teachers I have had , from Alex Kanevsky to Scott Noel, and Peter Van Dyke. A process that involves direct observation and the build-and-destroy method of painting. Jon likes a limited palette that includes no black, and only tow prismatic colors a cad yellow and cad red, then cool red, yellow and an ultramarine blue, basically an earth palette. He also like to paint on either Duralar (frosted mylar) or panel. 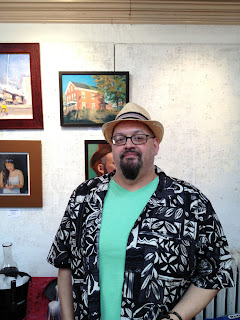 I had two paintings accepted into the Philadelphia Sketch Clubs Small Oil Show. Here I am standing in from of my entry, Altoona Red. There were over 150 pieces accepted in the show and at least that many rejected, so the competition was quite heavy. I am happy that all of my Dirty Palette buddies got into the show as well. 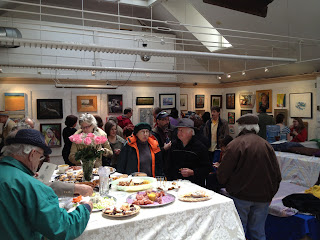 The opening was packed and they had a great spread of food and refreshments. It seems the shows at the PCS are growing in popularity and that means the quality of the entries continues to get a little better every year. 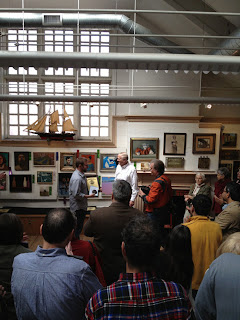 My buddy and new father Charles Newman was the winner this year, Go Charlie! 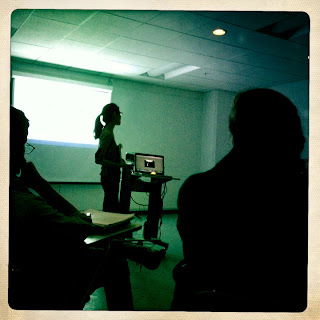 In my Reading and Writing Seminar we have our weekly readings and presentations. I have to say this semester this is my least favorite class and probably the least favorite class I have and as a student since I was in High School. I know I am not the only student who feels this way--which is a shame when you are paying such high rates for a class in a masters program.  I hope next falls seminar is a lot better than this class or there will definitely be an issue. 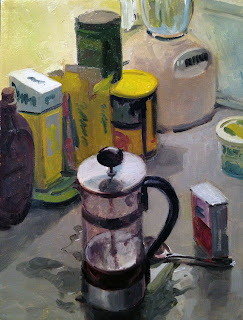 This quick little still life was painted in my kitchen one morning after I had my coffee. Sometimes I get struck by something and just have to grab a canvas and go for it. 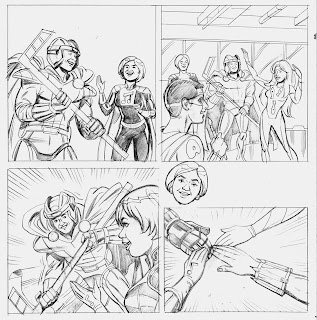 This is the pencils for a quirky advertising job I got in the last month for a company in Canada. It had to do with a bunch of teenagers suddenly using their talents from the rest of the book as superhero versions. It was also another "boob' issue as well. her rest of the book features live action actors, and the teenage actresses were-well--normally endowed. However when they I drew them I have to make chnages and pare down the boobs below what they were on the real life actresses and remove the "crotch" indication on the gal in the second panel. Normal stuff I have drawn a billion times, but the "client" was extra sensitive to these issue in an educational comic. I think nobody , certainly not kids look at anything this way--but if they are paying for it--they get what they pay for. So I still have  a lot of hopping from one place and one job at home drawing the strip or a quick job like this to jumping back into the painter's chair, but that's the way it will go for another year for sure until graduation. 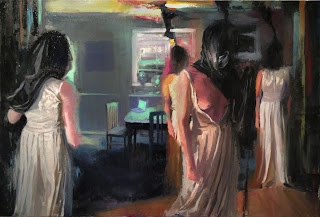 This is one of my finished paintings for the series I am calling the Bride for right now, and it will be one of the paintings I have in my final review. Below is one of the drawings from my Drawing Seminar with Bruce Samuelson. It was a one class drawing in HB pencil on Canson recycled paper in one of those big 18 x 24 sketchpads. 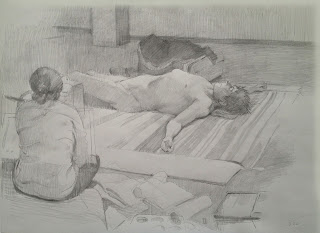 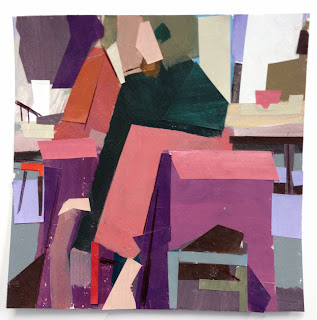 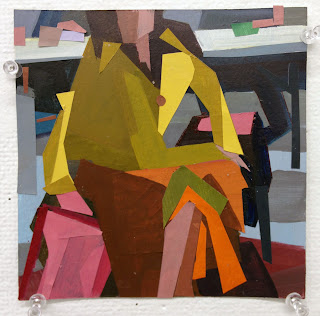 This will just be a quick mini-blog about the Ken Kewley workshop I took this last weekend at PAFA. It was a really great 2-day workshop that stretched Saturday and Sunday and Kewley is a very good but easy going teacher. he provided most of the material for the workshop as well to help focus and get everybody to work and concentrate on the ideas and subjects he was putting forward for us to work with--creating strong, solid compositions using abstract shapes and colors. I think this is one of the reasons the workshop went so well and everybody was able to also produce a lot of work. These are two of the several pieces I did that combined painting and collage. The top is from the first day and the second is from the last day. After I catch up on more of the strip and get my paper written I'll do a longer blog before I take the Jon Redmond workshop later this week.
Posted by Mike Manley at 8:58 AM No comments: