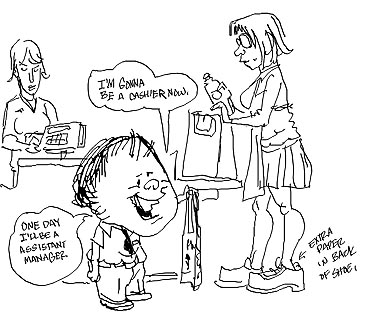 This is a quick memory doodle on the wacom based on some strange people I saw at the supermarket tonight. This type of drawing I'll come back to later and maybe use for inspiration to base a character on.
Posted by Mike Manley at 11:42 PM 2 comments: 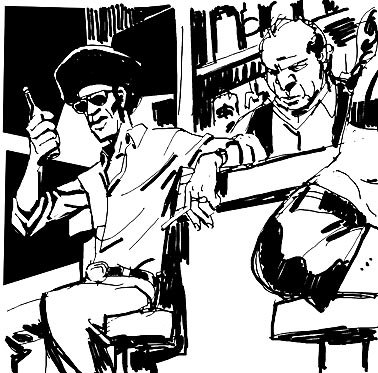 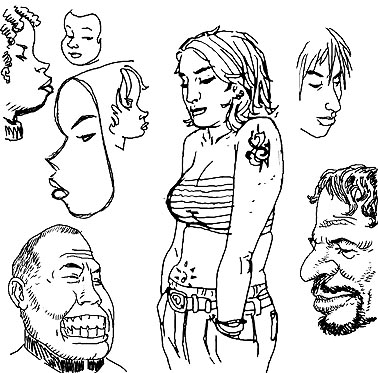 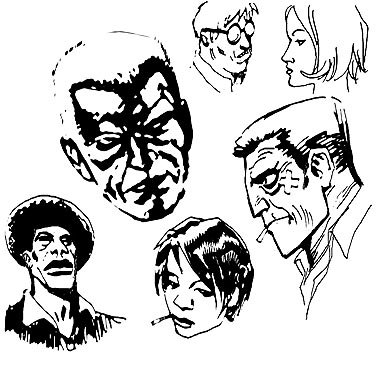 Some loose tablet doodles in photoshop while I had some morning coffee.... 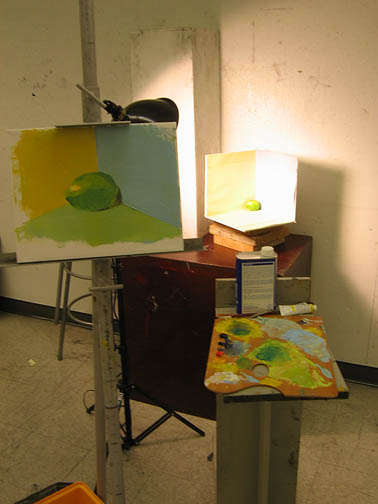 Things have been very busy here in the studio both with work and personal issues. I started my 8 week painting class last nite at DCAD where I teach. last night's exercise was to paint a still life with a palette knife and mix the colors on the palette. The still life was set up to have a yellow, blue and green backdrop and a lime. It's harder than you think to match colors, and the palette knife takes some skill as well, the ideas was to paint the entire thing in 9 tones max, without modeling the form...we had about 2 hours to do it. It was fun, I had to do a lot of remixing on the palette to get everything right.

It was fun. I also did a job for the CDC last week which I can't post, and my assiatant Bonia and I continue to tone the Ninja Turtles jobs, and Philly Wizard World con is a week away!
Posted by Mike Manley at 4:14 PM No comments:

The world is in the grip of the Force today, and I've succum to it as well. While the pervious enstallments of SW have been really uneven with too many CGI battles adn lack luster acting Lucas has me stoked. It's not often the fan-boy in me comes out anymore. Too old and too many times dissapointed...and perhaps I will be again. I still remember how disapointed i was with the absolute mess the Matrix became. i was a Star wars fan with teh first movie, skipping school at 15 years old to see it's first show at the Biarwood mall in Ann Arbor. I saw it over 20 times in it's first run in the movies between the drive-in and mall. I still remember my dad falling asleep during the Death Star trench scene!

I've been wanting to see this chapetr even since I read about it in Steranko's Media Scene some 25 years ago, darth getting pushed into the lava etc.

It still speaks to the power of Lucas' creation that despie his lackluster delivery since Empire, ( FUCK EWOKS!) coupled with the supernova overexposure that all the promotion creates, so many people world wide as so jonez'n to see this baby.

My prediction is he will return again to this universe, and on the big screen, maybe 10-15 years from now, after the TV shows and other spin-offs.
Posted by Mike Manley at 5:50 PM 2 comments:

This is a commission I took at a con, but wasn't able to finish before I left for home, so I finished inkng it and sent if off. 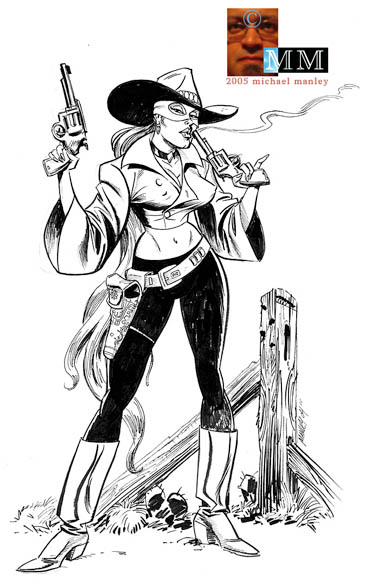 Something old, something evil

Been busy this week training a new assistant while finishing up the work on the Ninja Turtles. And while traning my new assisatnt I came across this sketch I did last year of Harley and Mr. J. 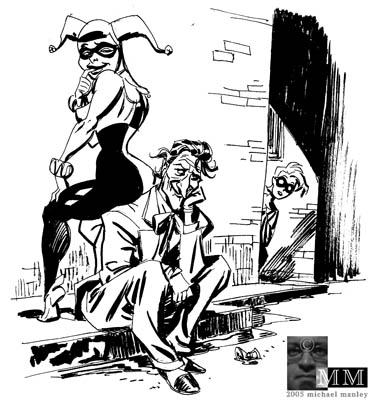 Here is the inked version of the penciled page I posted recently. 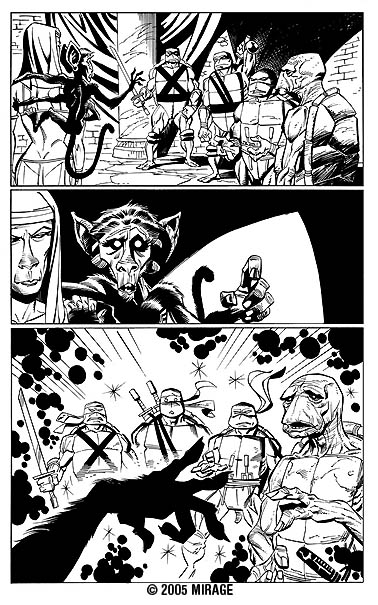 A couple of sketchs today, one of Buster 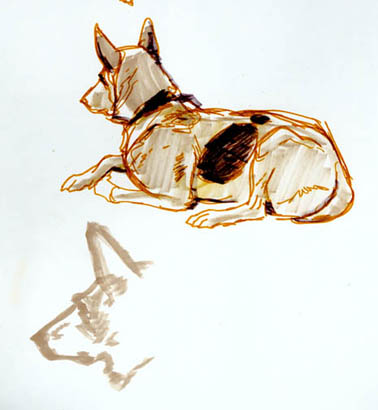 and one of the many roughs i did for the Tales of the Shadowmen paperback I did a while back. 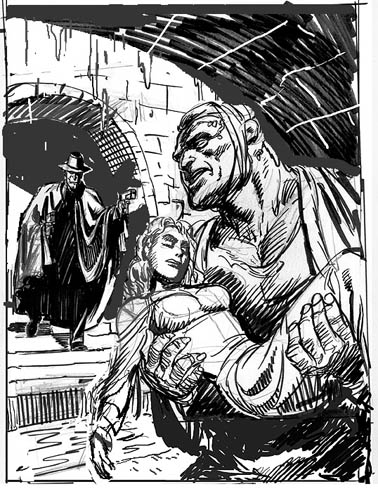 A lot of works happening in the studio this week between turtles, the Mag, the book and some upcoming comic projects I'll announce soon.

I'll be making my annual appearence at Capatin Blue Hen's Free Comic Book Day event in Newark Delaware this Saturday from Noon til 5.
So stop on by.....
Posted by Mike Manley at 9:35 AM 7 comments:

Spongebob's Patrick Starfish
Are these two beloved TV personalities related? They sure seem to talk similar...well except for Jane's fuck'n cussing all the time.
Posted by Mike Manley at 2:52 PM No comments:

Much happening here the next few days. Tomorrow is the last day of class for the students graduating from DCAD in 2005. So there will be a big review followed by some fun, and then the goodbye and good wishes, that is until graduation in a few weeks. I'll miss my class of animation students, they are a good bunch of kids. Fly little birds...fly!


I have also been doing more gesture drawings, last time at Starbucks. I am becoming as addicted to doing this as coffee. And Starbucks coffee is OK, not great.
Here is one of the sketches I did will trying to be invisible. The guys were drawn while looking slighlty to my right without turning my head, so it warpy but cool. 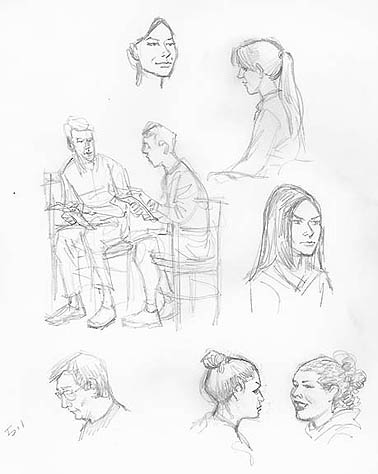 Next is a page from the Turtles. The layout was done by Ric Remender and Tony Moore, whoscaned it in, printed out in blue on comic paper and mailed it to me. I am tightening a few pages up since Ric was pressed for time with the zillion projects he's doing now like Strange Girl and Sea of Red. Once I get the go, I'll ink these puppies up. 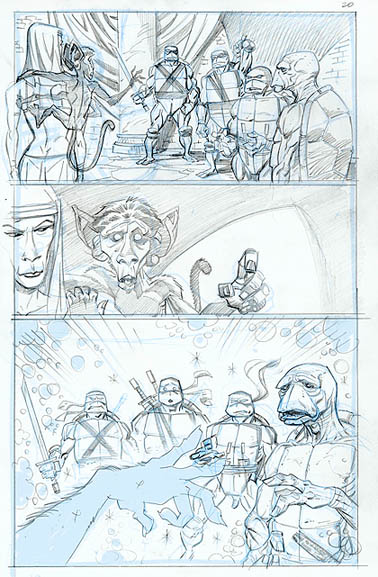 This will be a busy week also for work on the next issue of DRAW!, number 11, and the book with Bret Blevins I'm co-authoring. So I'll be doing some more gesture drawing and some regular comic book, and storyboard drawing too.

My pal Scott got me into 24 a few seasons back. And like all good TV, or drama for that matter, one has to at times suspend disbelief, like faster than light warp drive and that Yoda can kick anyones ass. And they have stretched believability many times on the show, Jack kicking Heroin, Jack getting electrocuted and a having the shit kicked out of him worse than Marv in Sin city... several times...all within 24 Hours, yet he saves the day. OK, sometimes it can be good TV, but I think the show is wearing a bit thin now, this season started strong but I feel is becoming too cliche... more evil arabs, they jet about the sprawl of LA with apparent ease, nuclear meltdown traffic or not. But this season they seem to be stretching it a bit thin even for me. Sure, I have to suspend the idea that all of this can really happen in 24 hours. Any computer code can be cracked by STU in seconds. Any place can have a camera, any store, mall, subway, parkinglot...Hell, it takes me a half hour to go to the supermarket 1 mile away for a can of dog food and I see no cameras on the road... And this season I think what gets me the most is that peoples character change so fast. People are fired, quit, go home and then come back in mere hours? I think the writing has slipped especially with the last 2-3 episodes. Of course the bad guy must elude capture until the final 'hollywood death' scene, either a plunge from a great height, or getting fried on some convenient electrical outlet or circuit board. The idea that anyone being the president and facing a terrible national crisis can be so wishwashy is just so unrealistic......

It was a rainy weekend here in Philly, Dogs were sad, people staying inside. I did this sketch of my pooch Shazam sitting in the window looking out...bored. It was done with a Pantone marker that is drying out which gives great textures... 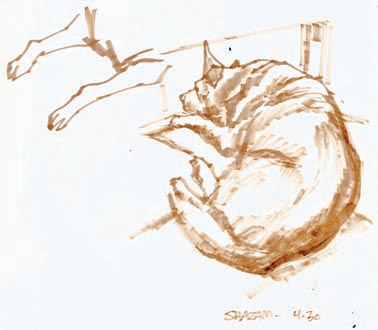 This may be the first bowl of fruit I have ever drawn..seriously. I did this free-hand as I waited for my coffee to brew, with the same marker I drew Shazam with. what an exercise to force my caffine starved brain to work first thing... 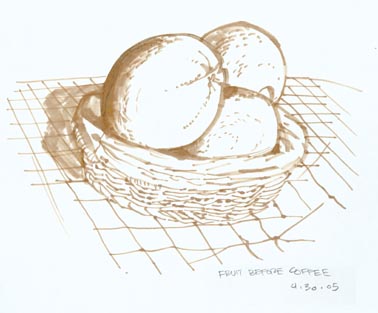 Later on I broke out of the house and hit the art supply store, the comic shop ( more about that later) and then the local Borders Books on RT 30 in Bryn Mawr, where I had some more frappycrappy coffe and did gesture drawing and sketching for 90 minutes +. 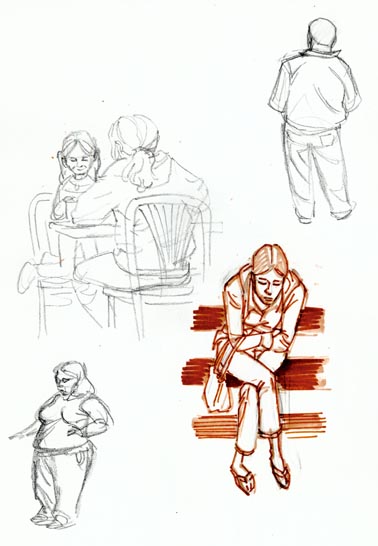 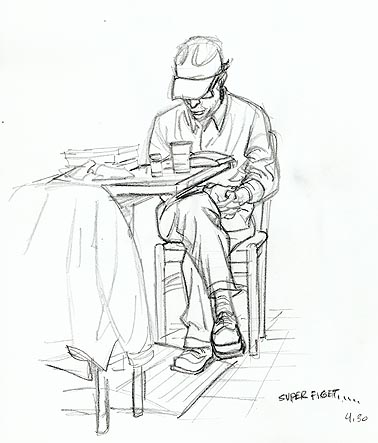