In DRAW! #29 (80 FULL-COLOR pages, $8.95), the professional “how-to” magazine on comics and animation, we "cover" illustrator extraordinaire Dave Dorman! Best known for his Star Wars related work, Dorman is a top painter of science fiction, fantasy, and horror novel covers, and an in-demand comic book cover artist. DRAW explores his career, and the techniques he mastered to become a success. ALSO: LeSean Thomas is a quickly rising star in the field of animation and comics. He garnered acclaim as the supervising character designer and co-director of The Boondocks, and his work as a producer and director has helped make Black Dynamite: The Animated Series an instant cult classic. Now he tells us what it takes to make it big in today’s animation industry. PLUS: "The Right Way, the Wrong Way, and the ORDWAY!" with new columnist Jerry Ordway, and "Comic Art Bootcamp" by Draw editor Mike Manley and Bret Blevins! 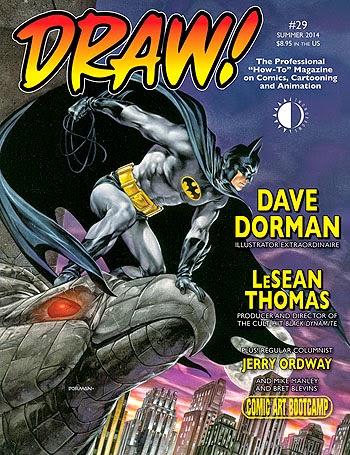 Order your paper or digital copies here!
Posted by Mike Manley at 12:15 PM