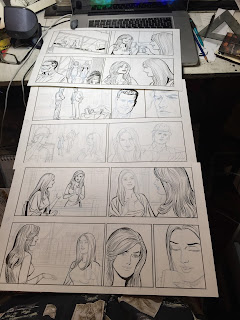 Here is another week of dailies for Judge Parker in the process of me inking them. It was a week of mostly talking heads as the main characters of the strip are reintroduced and share info that is basically a jump on point for new readers or a way for fairly new readers to get on the train of the new story line of Neddy's Factory.

This story line has been running over a year now as you can see by the Sept, 19th strip from last year. Looking back over that year I would say less than 2 weeks have transpired in strip time, maybe only a week. The Parkers were on the Hell trailer park vacation which lasted 3-4 days strip time but easily 3/4 of a year in strips.  They have been back 2 days, released the dude and now are dealing with Sam's retirement, which was announced a few days before the vacation. Sometimes its hard even for me to stay on top all of the time issues because a year or more might happen between story points. In strip time not even a year or a change of seasons has happened since my run on the Judge started. I know this type of thing doesn't matter to 99% of the people who read the strip, but I try and keep this all in my head so I can keep continuity steady, even things like hair length on the women.

I inked a lot of this current week with the Hunt 108 nib which is great for hair, a main feature of this strip--good hair! As much as I try and draw sexy women with ample cleavage for the "readers' interested mostly in those angles, something that I carried over from the previous strip artists, a lot of this strip ends up being talking heads so drawing good hair is a big part of the sexiness or appeal.

Thank you for giving posts and articles were very amazing. I really liked as a part of the article. With a nice and interesting topics. Has helped a lot of people who do not challenge things people should know. You need more publicize this because many people. Who know about it very few people know this. Success for you....!!!