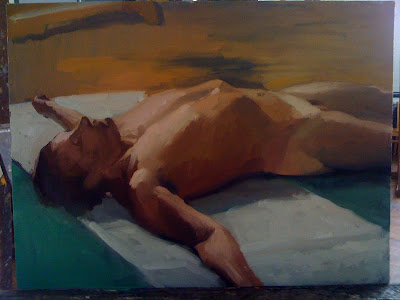 The third week has come and gone at school, next week will be the 4th and the fullest week so far. Due to the early start and the holiday the weeks have been broken up, so while we are in the third week some classes have met only once. These two paintings are from my figure painting class with Bruce Samuelson.
He's a popular teacher at school and his classes fill up quickly, so I felt good I was able to get in this time. The class is large and the heat and light in Studio 1 are notorious this time of year. Bruce is noted for setting up these poses where the figure is either laying down or just standing in a rather non-dynamic pose under natural light. The study above was done in my first class as a way to just get the juices rolling and was a once class painting. The one below is a much larger painting of the same pose I started last week. You can see where I started in and then started making a lot of changes, especially to the legs. This next week I'll jump in on them first and work my way back out to the rest of the figure 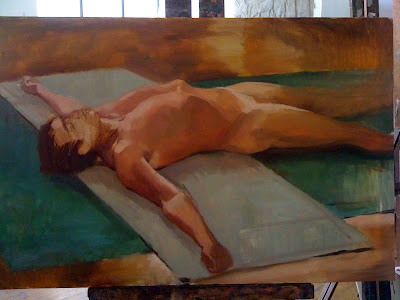 I have a lot planned for this fall painting wise and Bruce is also one of my critics for my 3rd year, we haven't met in my studio yet, so it will be interesting to get his feedback on what I am working on. Right now I have a few more SEPTA or commuter paintings in process and have plans to start my biggest painting to date which might be roughly 50 x 80. Bruce is noted for doing very large works so between him and Scott Noel I think I should get a lot of useful feedback.
Posted by Mike Manley at 12:06 AM