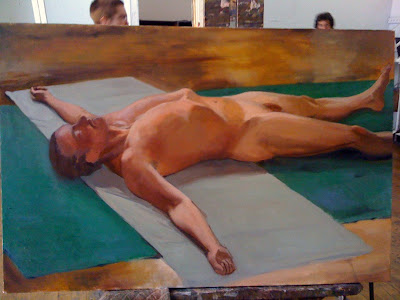 The semester is cooking off fast--the fourth week has come and gone already, or really the third and a half week. I had my first crit with Bruce Samuelson this week which was really a way for him to get to know me better and to see what I am working on and what I'm about right now in my artistic development. It was a good conversation and he gave me some ideas and points to explore further, painters to look at like early Dibencorn , Soutine and Nathan Oliveira and some of the bay area painters, knowing that they also might not quite be my taste. He also suggested looking at Rembradt and Rubens. He liked my train paintings, the night scenes and the interiors, and thought some of my other work was not as interesting, though well done. he also liked the idea of me pushing my color where Scott noel likes the idea of me compressing the color range---this is where I have to decide what works for me as it will be very common for the critics and teachers to give you very opposite opinions that clash and contradict each other.

I am still working on the painting of Lou in Bruce's class, I hacked at it again this week, but the time I can effectively paint on it gets shorter every week as the light will change after 90 minutes to the point I really almost have to stop painting. 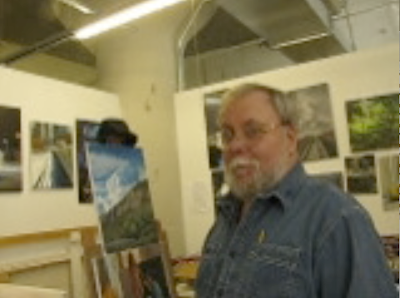 Bruce giving me the "once over" in my studio... 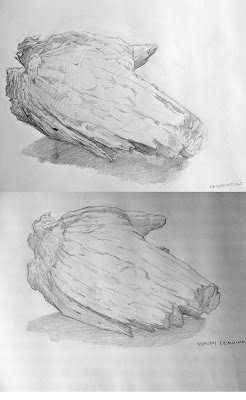 In Pat Traub's class we brought in some objects to draw, she wanted us to bring in something from nature to draw, so I brought in some cool funky old pieces of wood from the woodpile in my back yard. Then she had is draw that object for a little over and hour, put it away and draw it again from memory. Most of my classmates stopped after 10 minutes or so, but I kept going to the point pat basically made me stop. In a way I think she expected me to be weak or fail in this part of the exercise, but my memory is really very strong I think from all the years I've had drawing which trained my brian to retain as much info as possible. next week we start a drawing we will work on for several weeks in class, I think I will combine drawing some of the great selection of animal skulls we have along with something from nature. All in all a good week, I still struggled in Scott's painting class this week, I was pretty beat after working late so I'll make sure I get rested before the next class. I also subbed for Al Gury for his Life Drawing class over at Uarts on Friday, it was fun to teach that class for the day, it was a good group of students and i even had one former student Paul in the class from my days teaching at DCAD.

I will also be taking a portrait class with Kerry Dunn over at Studio Incamminati starting this week, I like his work and I've wanted to take a few classes over there for a long time and now finally have a spot in my schedule to do it.

Its gonna be a busy week!
Posted by Mike Manley at 3:06 AM

Hi! it's amazing aaaaaaaaaaall your blog! Very cool drawings! Congratulations and go on!!! :)

Dude those drawings from Pat's class are sharp. I missed you in class this week.