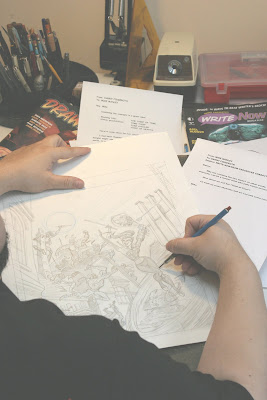 I thought I'd put down some thoughts here in response to the video Eric Powell posted up on Youtube a week ago. Seems the web and comics was a titter and rush with this for a few days. I think Powell had some valid points and the video was funny, but I also think there was also a bit of a miss fire as well in some respects.

I think despite the crappy distribution, crappy retail evironment and the taste of the average fan left reading comic books the buck, or the penpoint stops with the cartoonist. I have often heard the saying "there has never been a great time to be an artist", and I think you can say that for cartooning too. There were bad times in comics in the 50's and comics almost imploded in the late 70's.

The real issue I see is the fact that most cartoonist are lousy managers and businessmen. So many wait for something to change, for distribution to get better, or somebody to come up with millions of dollars and a desire to make comics cool again. Basically for Superman to come in and save comics. Superman is only going to save himself, or Time Warners anyway. And Superman doesn't care about you unless you are drawing him. His freelance slave.

Superman's dominance  doesn't mean that Hellboy or American Splendor won't sell, they sell what they sell because the average comic fans in the direct market prefers Super Dudes. retailers get a better cut from Marvel and DC too, but I don't think that matters as much as the fact that the direct market is a stagnate and dwindling market.

I think there are a few fairly clear paths in the current situation for the cartoonist now.

A) work for a major publisher if you can, or want, they pay decent rates and if you can find steady work ( much more difficult today) you can make a good living. However--there is no loyalty for service and royalties are a thing of the past for most guys I know. Lasting on a book for 12 issues is almost unheard of now, so you'll likely have to dance around and hope you stay stylistically viable and your editor doesn't get sacked. There are way more asses than seats today.

B) Do your own thing.

Now with things like the Diamond minimum and the anemic direct market the chances you'll make a middle class living or even get your work out there is almost zero now. I am friends with few people like Thom Zahler and John Gallagher to name just a few who do this but don't really make a living--they still break even at best. They still support their books more than the books support them. But they are committed to doing their work. I did the same years ago with my Action Planet comics which lead down new paths for me.

2) Try newspaper strips-which are also in decline, but world wide still very popular. They still launch about a dozen strips a year last time I read up on it. Not a great chance, but if you do well, get in at least 200 papers you can make a living. I make decent money doing Judge Parker, if I also wrote it I'd do even better.

This is like being a farmer. You have to do a lot of work, long hours and then see if that crop will yield. The onus is all on you to promote and stay out there waving the flag 24-7. There are many web strips, but how many beside Kurtz (PVP) and the Penny Arcade guys make a living--a real living I don't know.

I'll clarify here, my idea of a living monthly wage is a minimum of $3,000. Your milage may vary.

You might have to toss many things out there till one clicks.

My old high school buddy Lloyd Dangle self distributes his strip Trouble Town. There are other cartoonist who do this. I think any new crop must be web based as the thrust of all media really is going in this direction. I love print, but I have to give over to the new wave too and hope that print will survive as a reprint form or archive.

4) Find a book publisher and sell then your own graphic novels. I have several friends from Jamar Nicholas to Bret Blevins and Nick Bertozzi who have done this. The fact is the advance is really the only money you will see for a long time, so it better be good. The fact is that the book publishers are in general better at getting and maintaining their stock of books out there. If you can get the libraries to order your book you can do very well, there are over 100,000 libraries in the US. But Borders and brick and mortar stores are in decline...

I have done all of the above, even provided a monthly comic strip, The Creepertins to one of the local Monthly free newspaper/coupon mags..but they dropped the strip for ads.

There are no guarantees now, you have to strike a hundred anvils raise many crops and hope that one will strike it big and be a hit in the market. In the old days guys like Kirby struck a lot of ideas and most didn't stick, but a few became huge. the question also is how flexible are you as a creator, how good is your skill-set? Are you weak and limited and do you have more than one idea? Some people just have one idea, one way of working and that hurts them more than the shittiness of the direct market. Don't just point the finger at the market with a stern wag, but use it to hold that mirror up and look at yourself in a critical way.

You have to take the risk like a farmer, and some crops just get eaten by weevil's or drought, and sometimes everybody brings the same crop so you can't make much $$ that way. My feeling is waiting for Superman will end up being a very long wait.
Posted by Mike Manley at 1:02 PM

I would agree, Mike. Though DC did cut their rates for several parts of their publishing so the money I now get is lower but still better than IDW, BOOM, Archie, BlueWater, etc. My cover rate was raped and is half of what it was. Still a kick in the ass though as there is no "up" in comics for which to go unless you land a popular superhero book. But then your editor could be gone and you with it as the new editor comes in with his own ideas. I don't see it getting any better either since the sales have been real low and most of the local stores are suffering from poor delivery dates from Diamond who wound up delivering quite a few higher priced items that were order last February and delivered them in January of this year (and after the Christmas season) so they are dropping the ball big time and hurting stores. Many artists will have to diversify if they haven't all ready. Even Cheeks is now trying to do storyboards as his character design phase I'm guessing is now over and not what they want.

Just curious how rewarding, financially the newspaper comic strip business is? Especially for a legacy strip like Judge Parker. Since, I have a little working knowledge of how it goes, by knowing how most papers pay for the comics strips. With a seperate weekly payment for daily strips and Sunday strips. Small market papers pay much less than say the Los Angeles Times or the Washington Post. Does the syndicate still take half the proceeds? I have to believe that online/digital revenue is getting better, with Comics Kingdom and some papers paying for the strips to appear on their websites (although I am sure it is a fraction of the cost of the version in the paper)? If my math is right, King Features says Judge Parker is syndicated in 175 papers (I happen to think that number is high, wish it was higher). It's been stuck on 175 for the past 10 years. So, say it is 175 papers. And, 100 run the Sunday strip too. If the average daily subscribing paper pays $40 a week to run JP, the syndicate would net $364,000 in fees ($40x175x52weeks). If the Sunday strip averaged the same amount in 100 papers, that would be another $208,000. A total take of $572,000. With the syndicate likely spliting the numbers 50-50 with the creator. Or in this case the creators (you and Woody Wilson), it would be spliting up $286,000. Or $143,000. Plus whatever the split is with digital/online fees end up being.

I'm sure my numbers are off, as $40a week is pretty high for an average, but because Judge Parker is a legacy strip, it should be better than the newer ones. Although, I know of a couple papers that demanded rate reductions on long-time legacy strips to continue carrying them from the syndicate. Ultimately, I guess it depends on how many big market papers and small market papers still carry Judge Parker? And, if that 175 number is correct?

By the way, really like the look you have been giving Judge Parker in the last few weeks/months. I like it. Nice work!!

I wish those number on the split were true, but they are not ;-)

Excelent reading, Mike. I always take a moment in the week for see your blog. Its an excelent mix between comercial art and non.(both in a great level!) A very special and honest place. Thank for that!