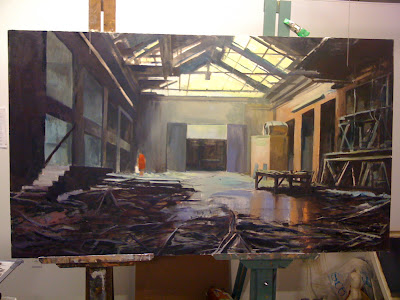 Well its the week before Spring Break and that means I need to extra crunches for my six pack so i can make the scene down on the beach with those hot college chicks.

But between sets of ab crunching I'll be crunching paint in the studio as it is almost halfway through the semester and that means that much closer to having to hang my wall for the ASE. The big painting is well under way and I feel getting close, very close to a good end. I feel really good about it which is something I don't always have.

I was also happy to be one of the monitors this weekend for Vincent Desiderio's workshop at school, this time on working from photos. Vince also gave me a great crit on my work as well. Vince is a great artist, teacher and really just a great guy. He really spent a lot of time with each of us for the two-day workshop not only on the purely technical, which he did, even doing a demo, but also on the art world as a business and the ups and downs as well as really i feel trying to rally and inspire us as fellow painters the entire time. There were 30 of us, a mix of undergrad and graduate students and Vince kept us going the whole time. the first day we set up and photographed the models, each student taking turns shooting pics with the camera as the two models moved around. We got them developed and printed out at Kinko's and then Vince did a demo and talked about how he worked with photos. the next day we drew from the photos and then shellaced the drawings as I have done before with Vince's workshops and then I inked the drawing in with a warm brown ink and then started painting following Vince's process. 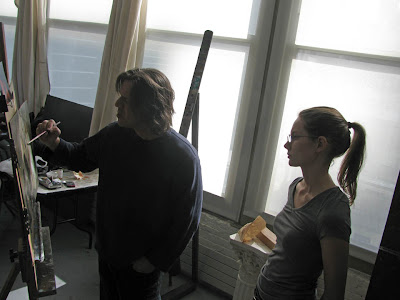 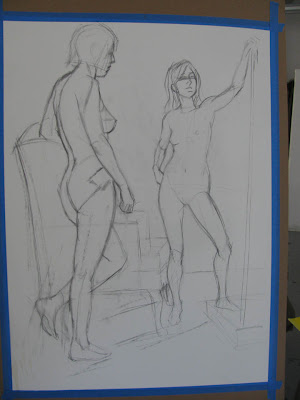 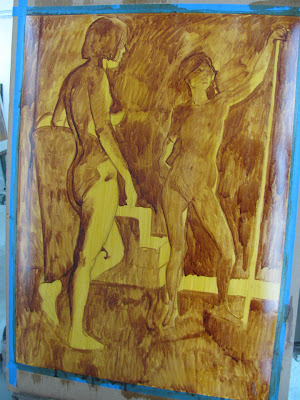 I have taken Vince's workshops I think 4 times now and each time I get a bit more and a bit better at getting his process, besides I just like the guy.

Below is the painting from the workshop which is about 4-5 hours work. 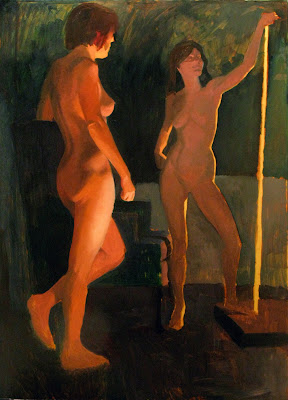 I drew the figures in in charcoal on 4 ply Strathmore then shellaced it with amber shellac so that i could go back in and working in the lights middle tones and shadows in the 'half light" fashion that Vince talks about where you slowly build up the figure by keeping the shadows reflective and luminous and if you must, ignoring for the time being local color.

I'll have more on the details of this approach in a later post probably over spring break.
Posted by Mike Manley at 11:28 PM