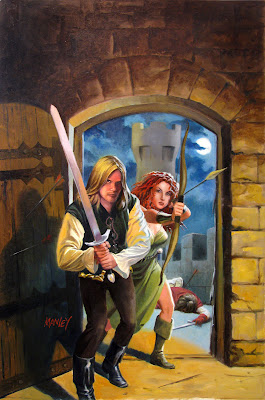 Here is the final cover illo featuring Robin Hood and maid Marian for the fine folks over at Airship 27. This is my second cover for them, the first one which I did last year garnered my the Pulp Cover of the Year award. This cover was to feature Robin and Marian breaking into the castle, and so one I had my idea I had my two friends Will Sentman and Alina Osipov model for me. Will was the model for the first cover I painted and he has plenty of Ren-fair costumes which came in handy. I shot several pics but never could get the exact poses I wanted so I just used what I needed, mostly folds, drapery, from several poses and most of both figures are drawn from imagination. I don't want to be a hostage to a photo and time was tight so I could only get both together for one session. 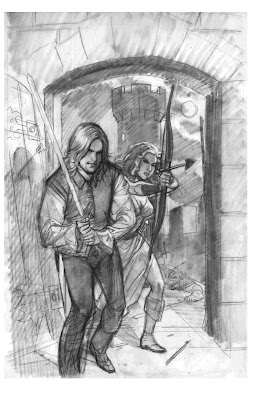 Once the sketch was approved I got a nice heavy piece of old Scanner Illustration board and put 4 coats of gesso down. 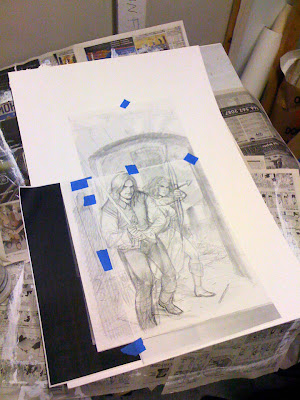 Then I xeroxed my sketch enlarging it and taped it together to make a transfer. 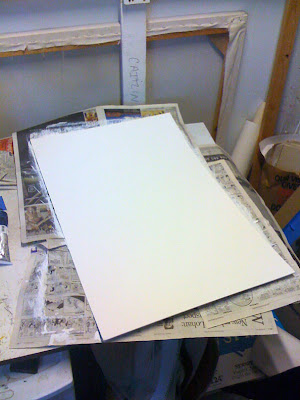 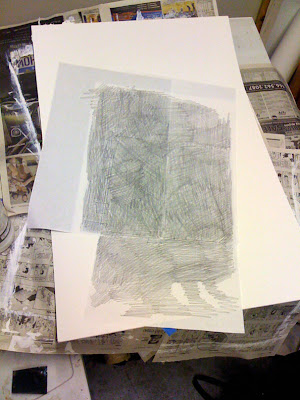 Then taking a 6B pencil I coated the back of the drawing and taped it to the illustration board. 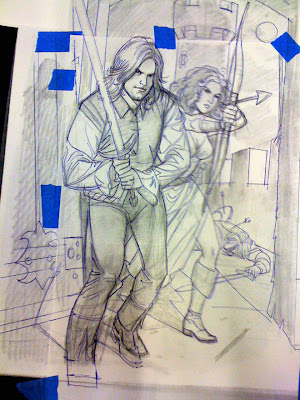 Then I traced it off on the board. 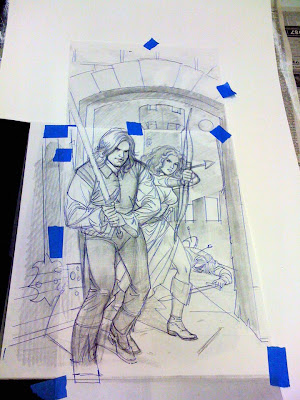 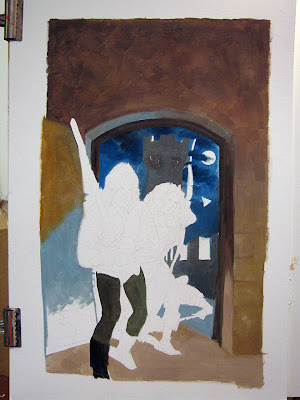 I decided to not do a color sketch this time and just went for it--I figured I had a strong idea of what I wanted, a two color world, the warm inside of the castle vs the cool night outside lit by the moon. I also was thinking of the great pulp artists like George and Jerome Rozen and of NC Wyeth as well. 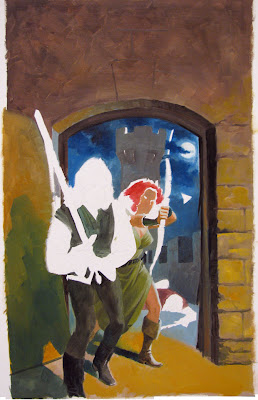 I massed or blocked in the composition ignoring any detail, just concentrating on the shapes and color atmosphere. I still had my drawing and so working from that and the photos I worked in the details after the big masses were well established. If I got too picky I'd either mass it up or wipe it off and work back into the "bed' of the big shapes. Between session I would oil the painting out with some linseed oil and a paper towel. this kept the darks from sinking in and the colors vibrant. The only medium I used was some Liquin fine detail. I probably painted each face 4 times, maybe even more, I even took some yellow ochre and glazed over the inside of the castle and the figures once to bring them inside the warm of the castle interior. The idea of keeping one color inside vs outside I get directly from my lessons at PAFA with Scott Noel and Peter Van Dyck. I feel part of the way we achieve a believability and marry the figures into an environment is to keep everything in that same atmosphere. This was a lot of fun and went fairly fast once I got going, I really wanted to have that fun old pulp feel, so I wanted realism but only to a point. The folks at Airship love it--and a happy client is what's important here as well.
Posted by Mike Manley at 9:17 PM

I love your transfer method. I used to do it with crayons when I was a kid!

Wow, your handling of the lighting is amazing. Do you have any tips on improvising lights (especially bouncing light) and shadows when there's no reference available?