While moving files for back-up I came across this Judge Parker strip from last year that I had to make a change on. Steve is Sam's partner in the strip and Gloria is secretary to both of them. She is also Steve's girlfriend. When they were alone at the office I figured they would maybe be a bit closer or relaxed after hours if they were alone, so I had her sit on his desk to suggest this closeness. Its also a way to keep the strip a bit sexy, which the fans are very, very, very obsessed with over on the Coimics Kingdom message board--but in let's say a very unhealthy and juvenile way. Anyway King asked me to change the strip because my editor there felt it was inappropriate to have Gloria on the desk. It wasn't "professional".

So here is the original strip and the changed one. 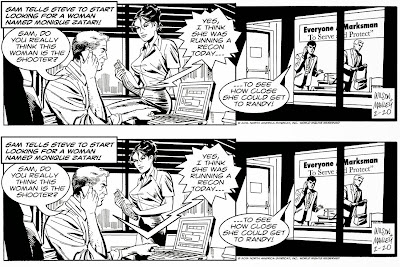