The Contented Winter of Discontent: Shows, Workshops, Teaching And More..... 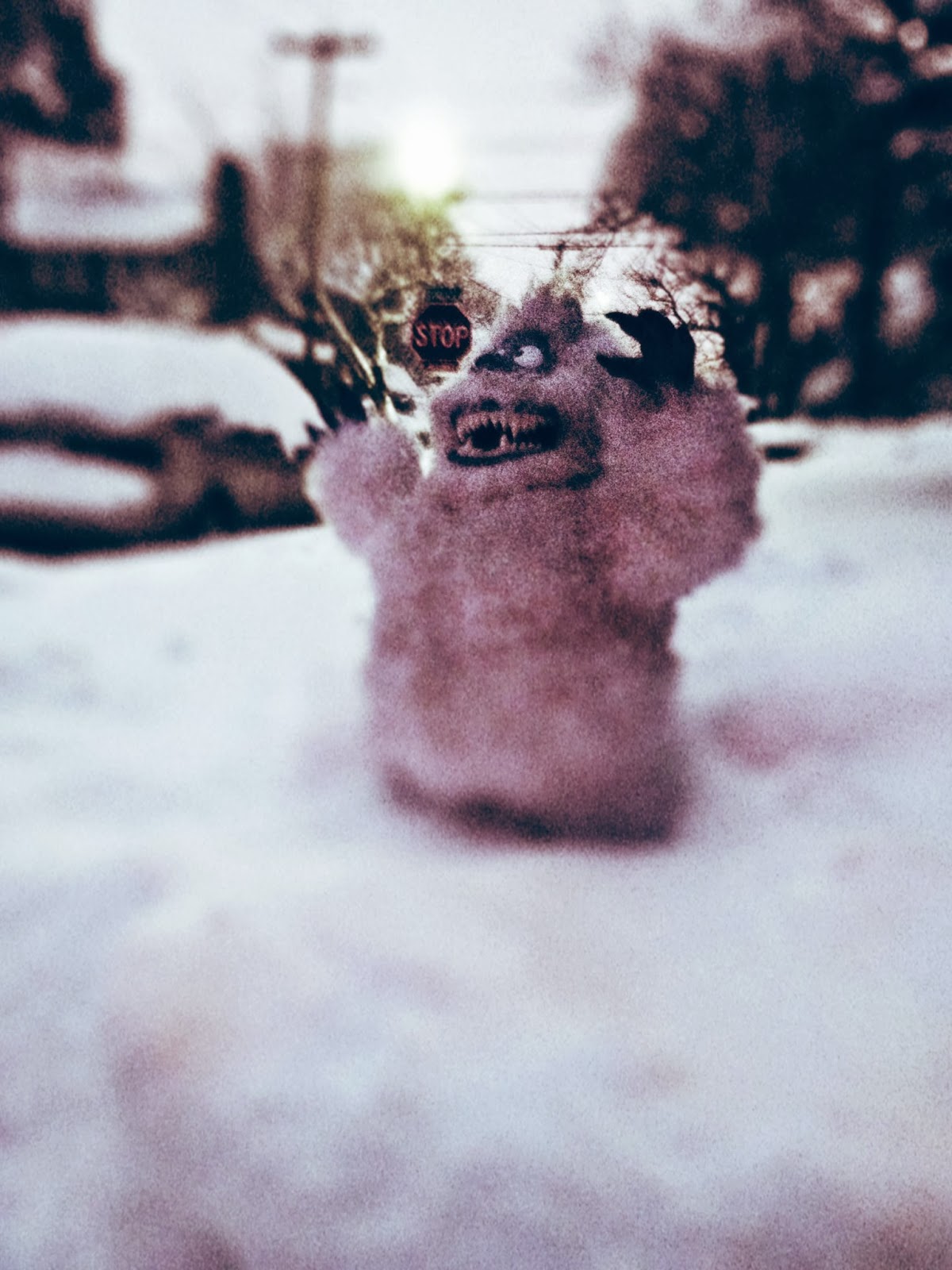 Its been a few weeks since I have had the chance to sit down and update my blog with all of the comings and goings and shoveling of this winter semester. This has been the worst winter I can remember in my time in Philly. Its been brutal especially the last two weeks and the ice storm that knocked out power to 800 thousand people or more. I've had a few school days due to the weather but luckily nothing I will have to make up however it did really cramp the last two weeks with my visiting critics Martha Armstrong and Denise Green who travel down from Boston and NYC. They come once a month and so there was a scramble to try and reschedule. I was used to the hard winters in Michigan and liked the fact that they seemed a bit milder here in Philly, but this year it seems its more like the Tundra here than usual. 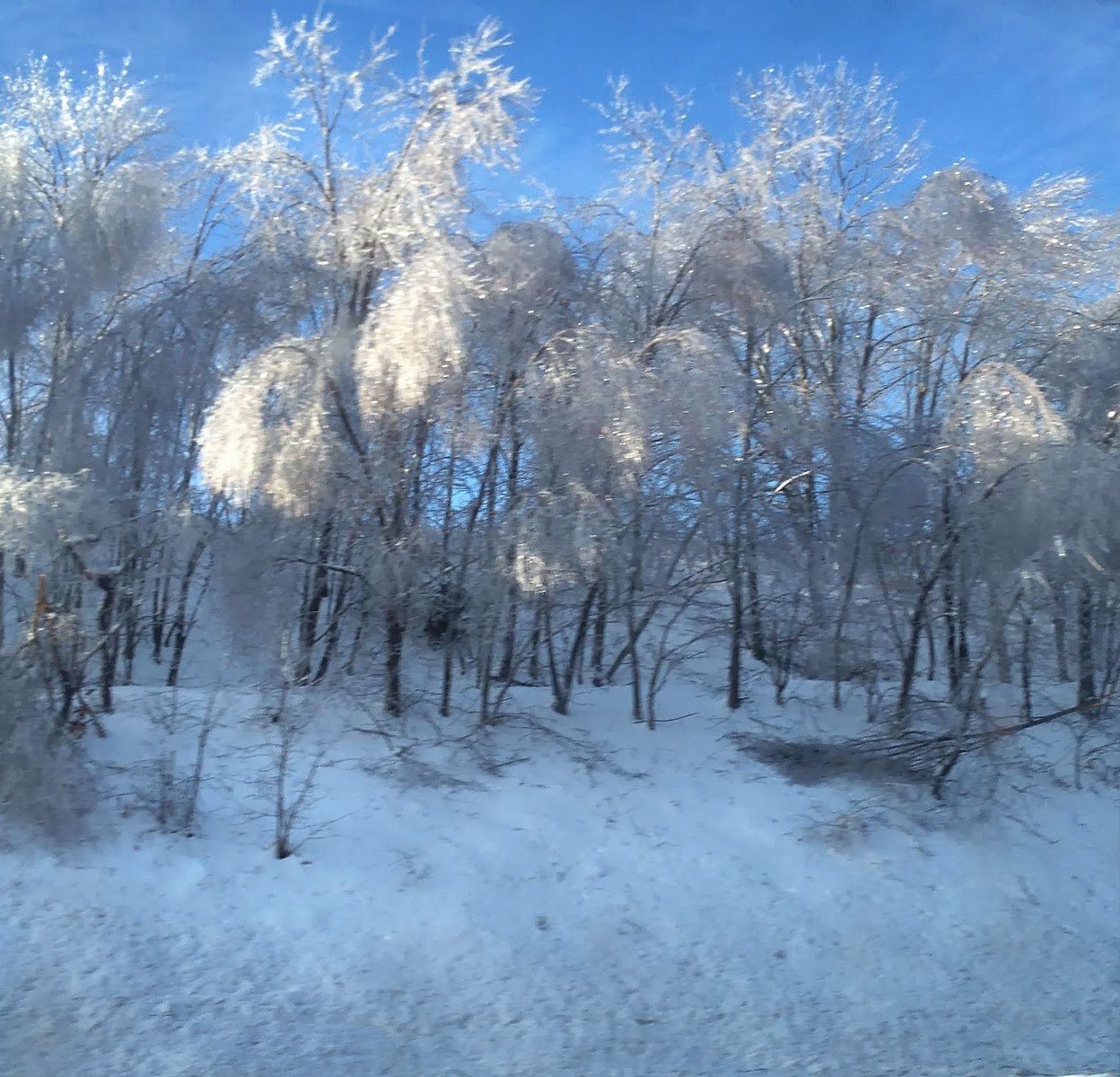 This winter gets you down too, it gets you blue and a bit depressed, I don't know if it's full blown S.A.D.S but it makes you sad some days. I know we all complain, nut it seems everybody is so ready fro spring this year I think we'll really have spring fever breakout! 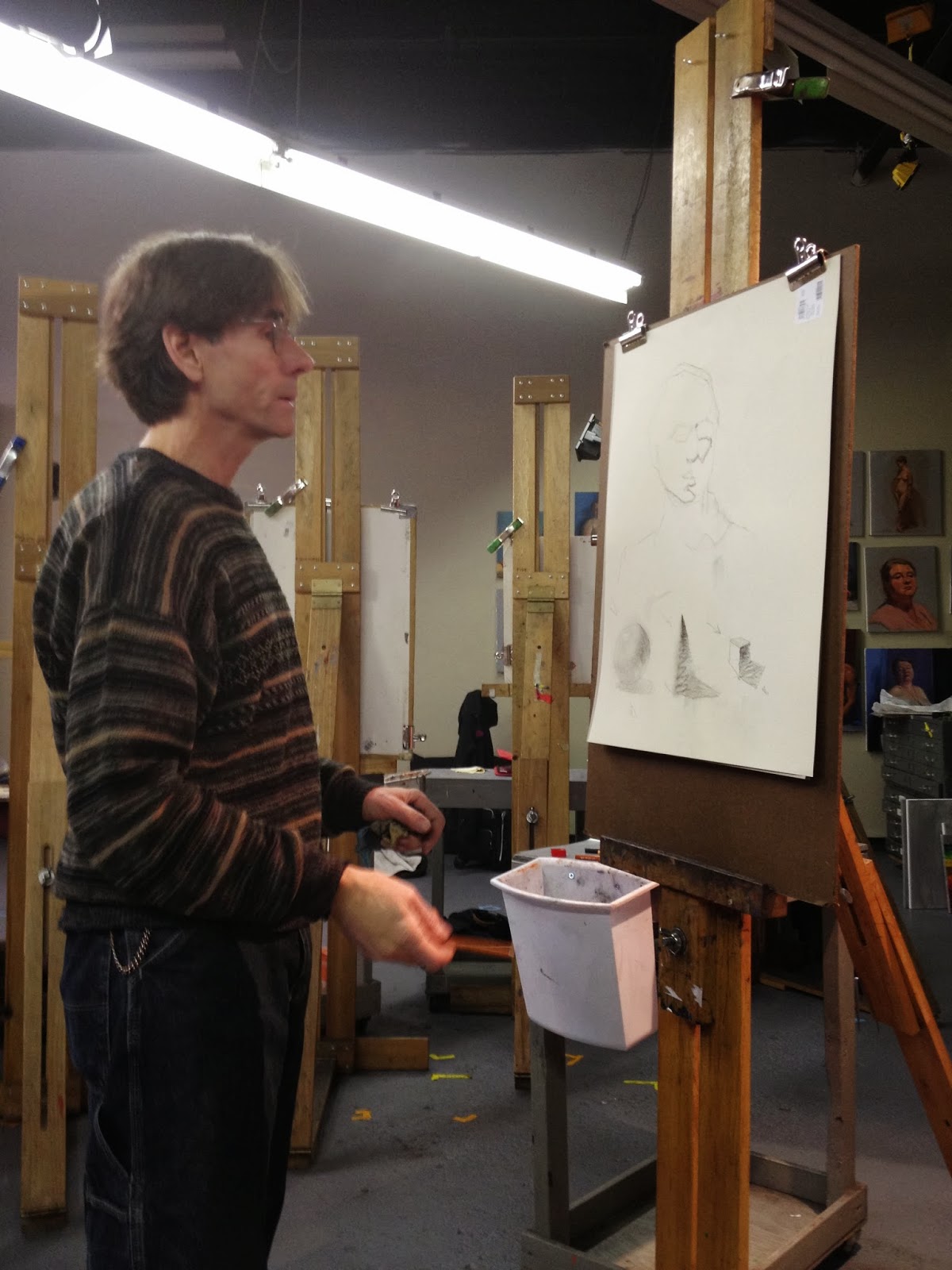 But despite all of this frost and feeze I had a great time at the workshop at Studio Incamminati by Daniel Sprick. This was the second one I have taken with Daniel at Incamminati, I took one back in 2011 and the third demo I have seen by him including the one he gave at PAFA back in 2010 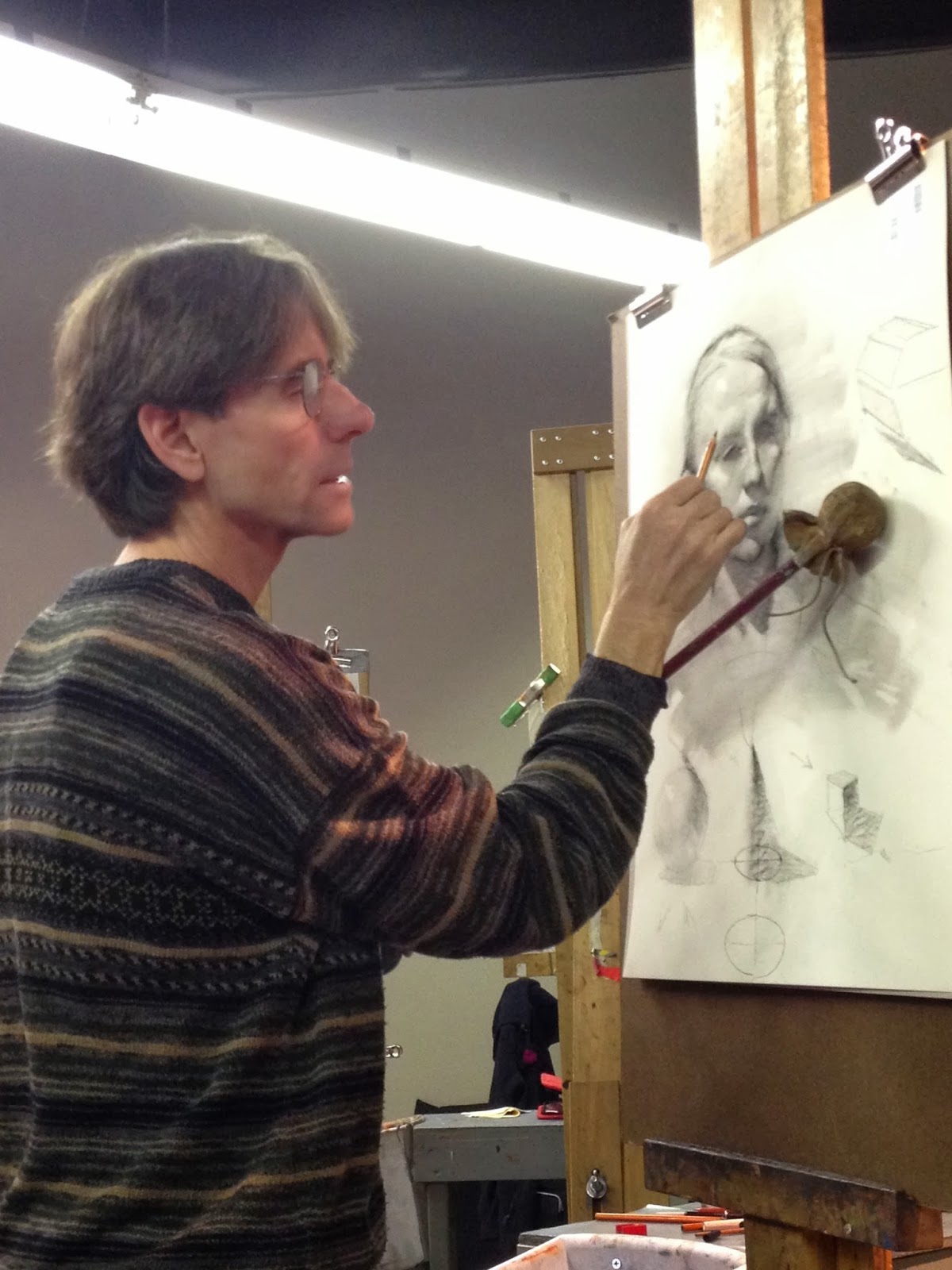 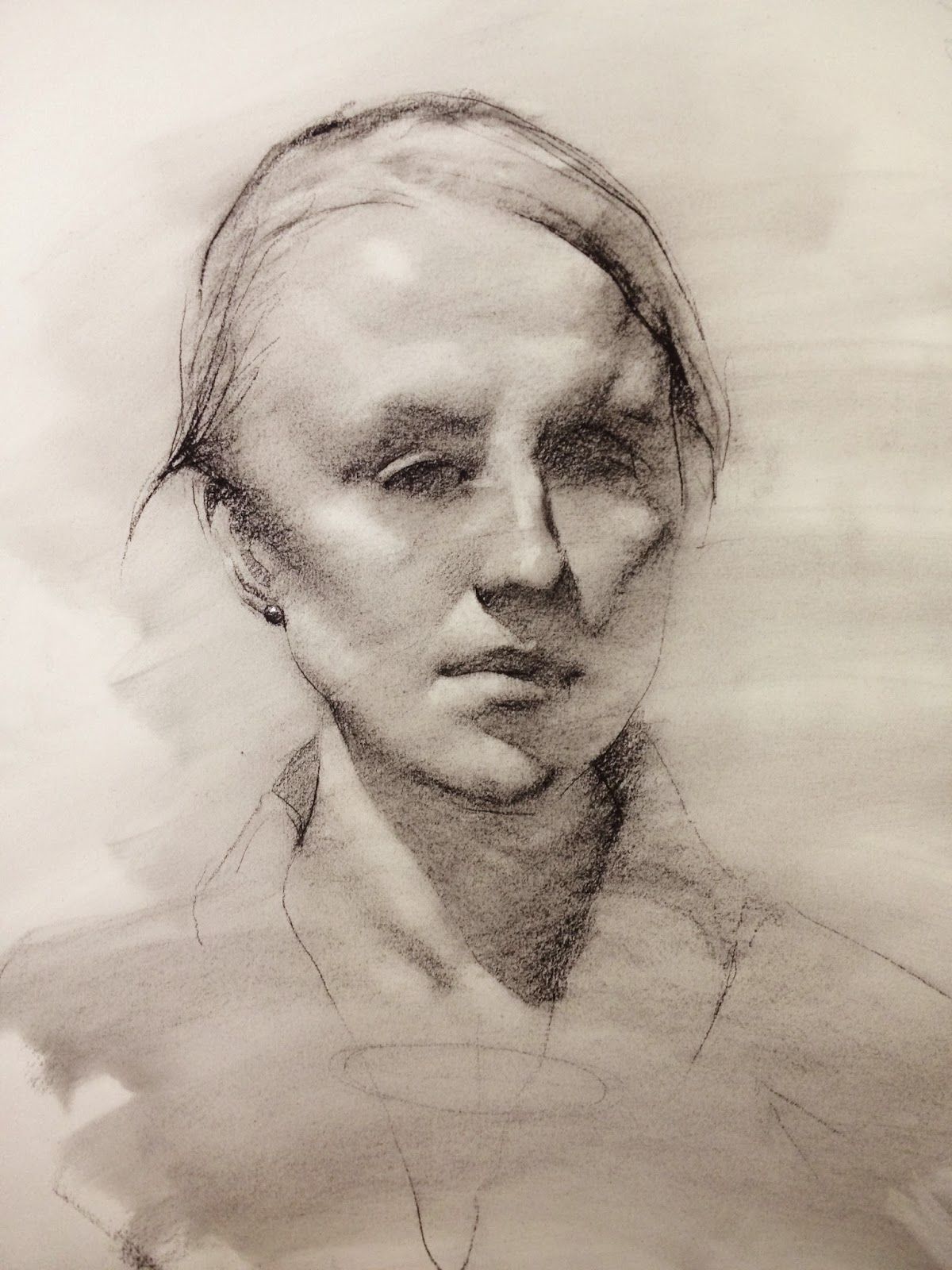 Daniel did a great job of explainging the basic drawing princiles of light, shadow, form shadow, cast shadows, reflected light, etc. then he did a very handsom drawing of our model using a Generals charcoal pencils and some Pitt compressed charcoal.


Daniel did a drawing demo the first day and then a painting demo the second day doing both a portrait and a figure. We all drew the first day but the second day the bulk of the attendees wanted to just watch him work so Daniel did an all day demo. The first night he also gave a 2-hour slide show talk about his work and work he liked and was inspired by. Daniel is just a great guy, a very down to earth and friendly guy, laid back for being so talented. 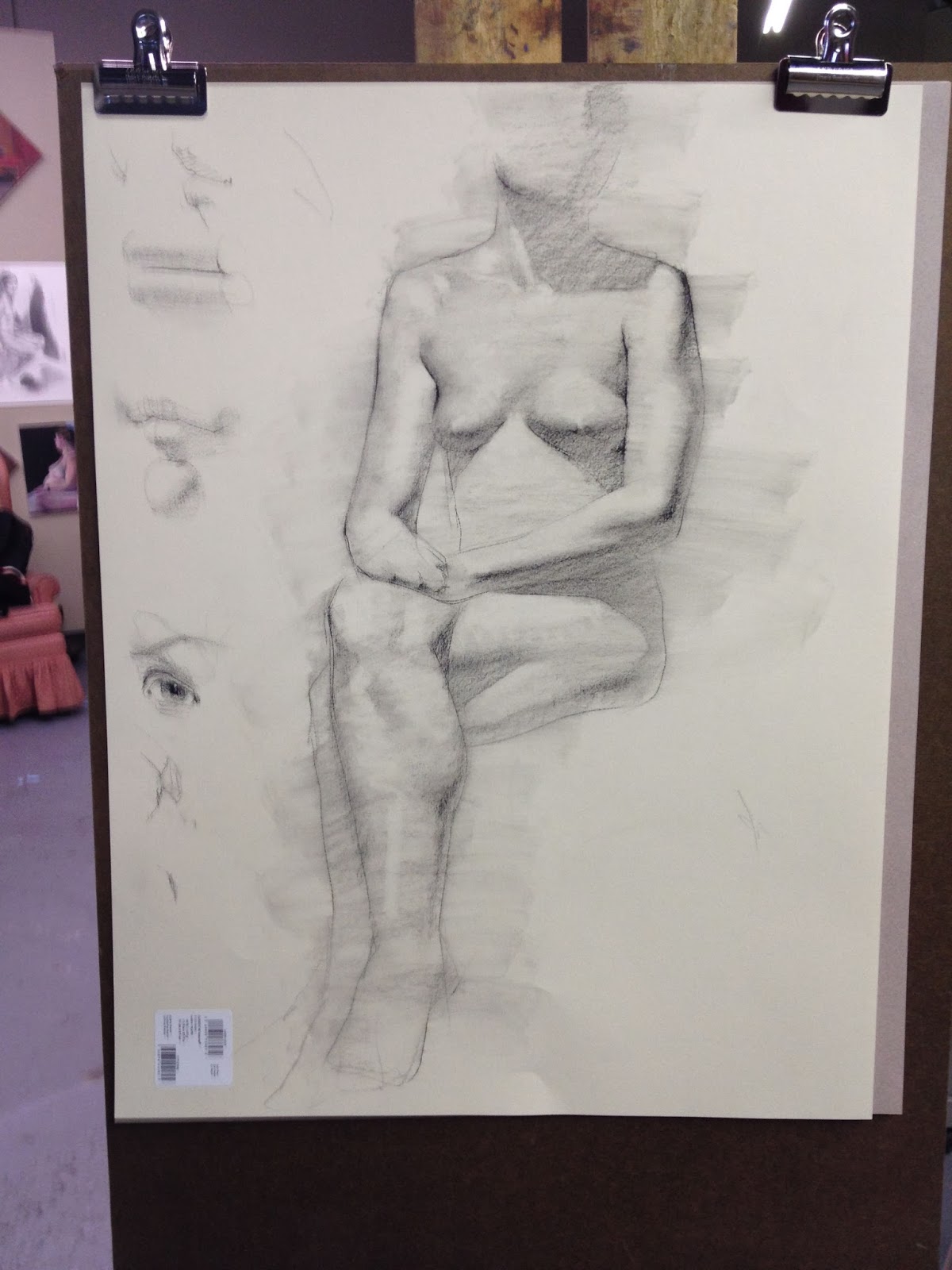 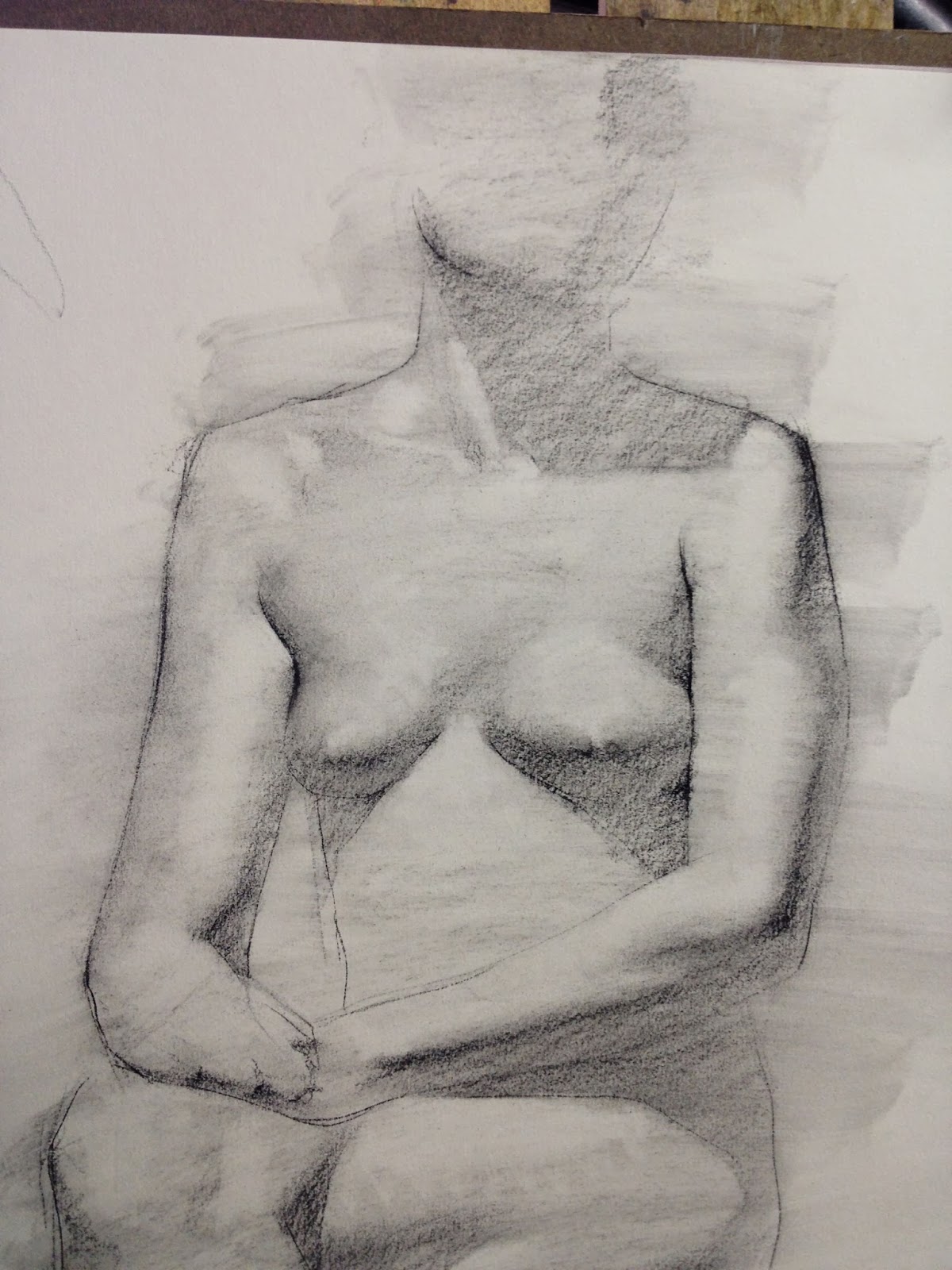 Sprick's figure drawing demo from the afternoon, he spent a lot of time going around and talking to people and helping with their work. 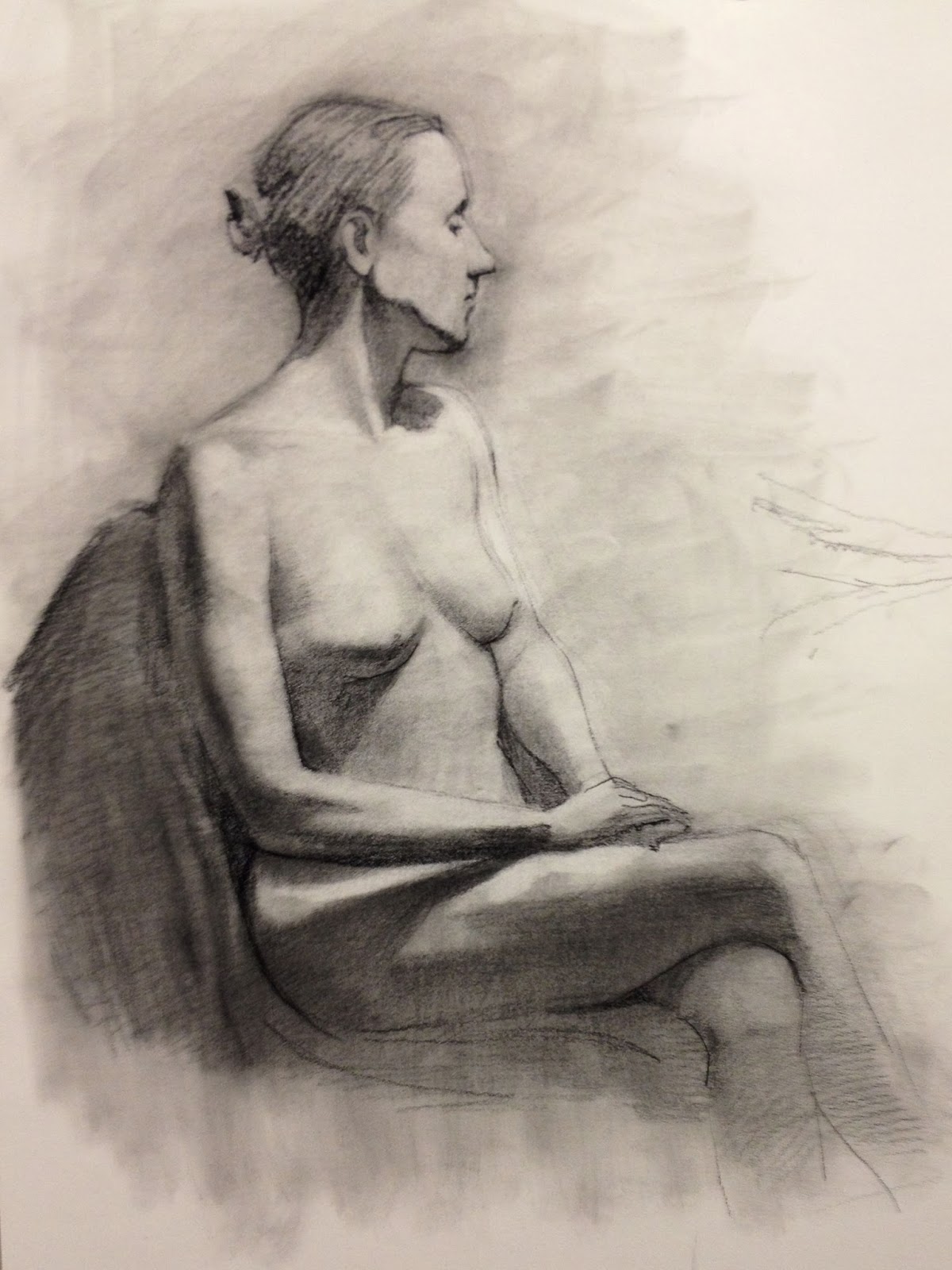 This is my drawing from the afternoon workshop. I was pretty tired to be honest with all of teh freelance in teaching but it turned out OK for the 2-3 hours we had to work on it.

I think that makes his workshops even better because he's not hitting you with his ego the who time, but rally trying to share his gift. I also had a good time talking with many of the other painters who flew in from all over to take the workshop. 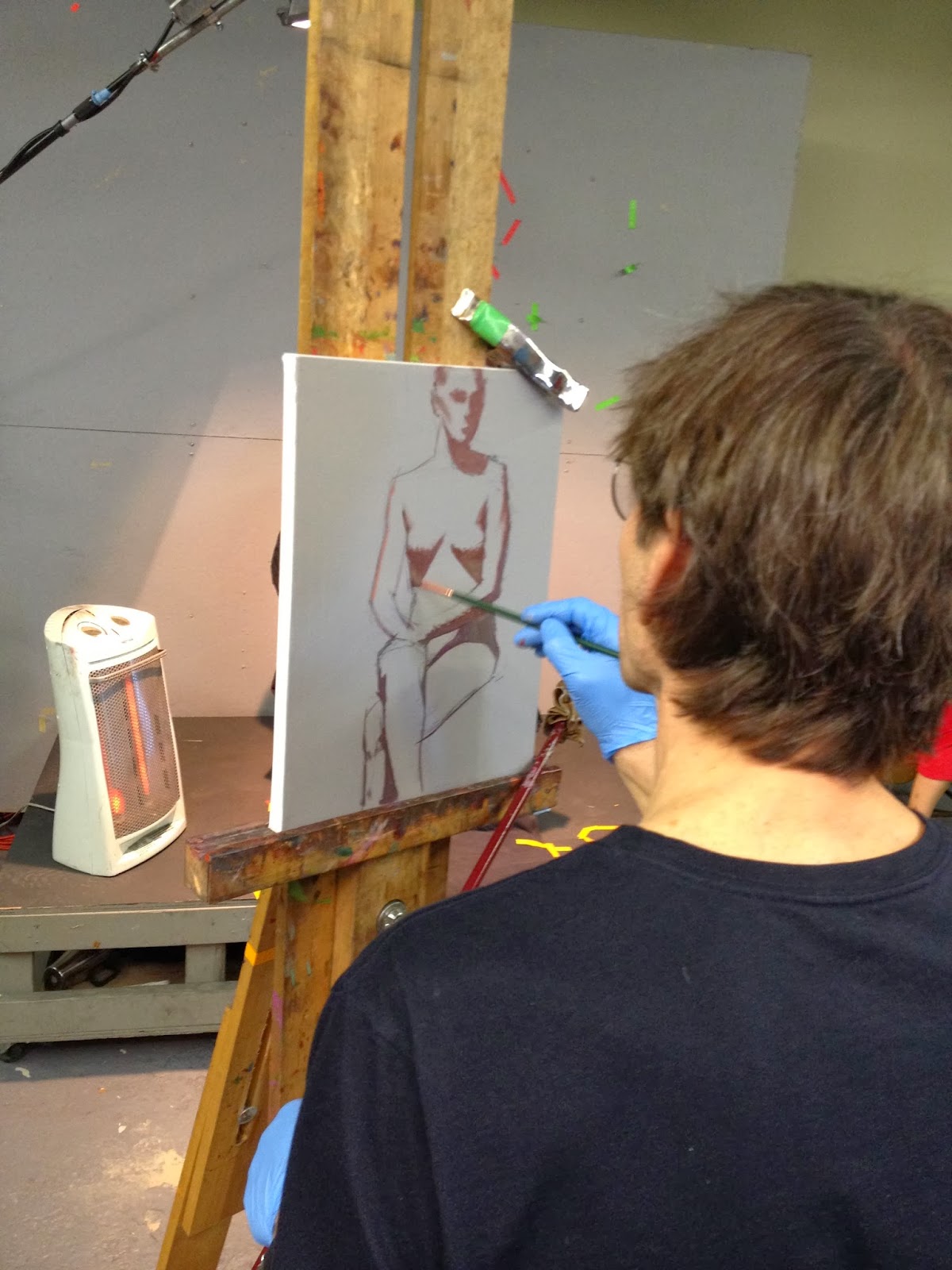 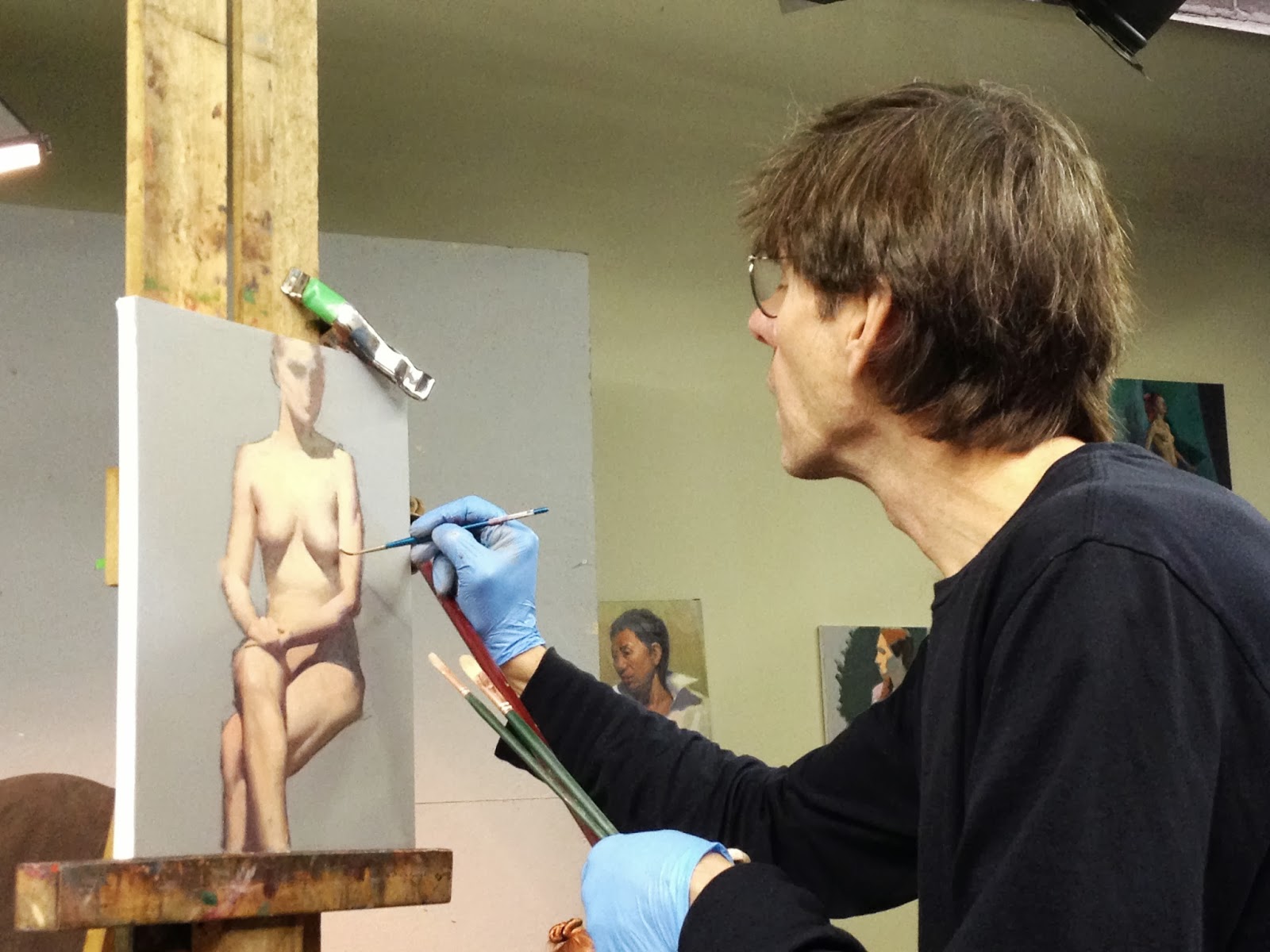 Here are four stages of Sprick's deom from the model. he worked on the nuetral grey surface they use at Incamminati though he doesn't do that for his own work 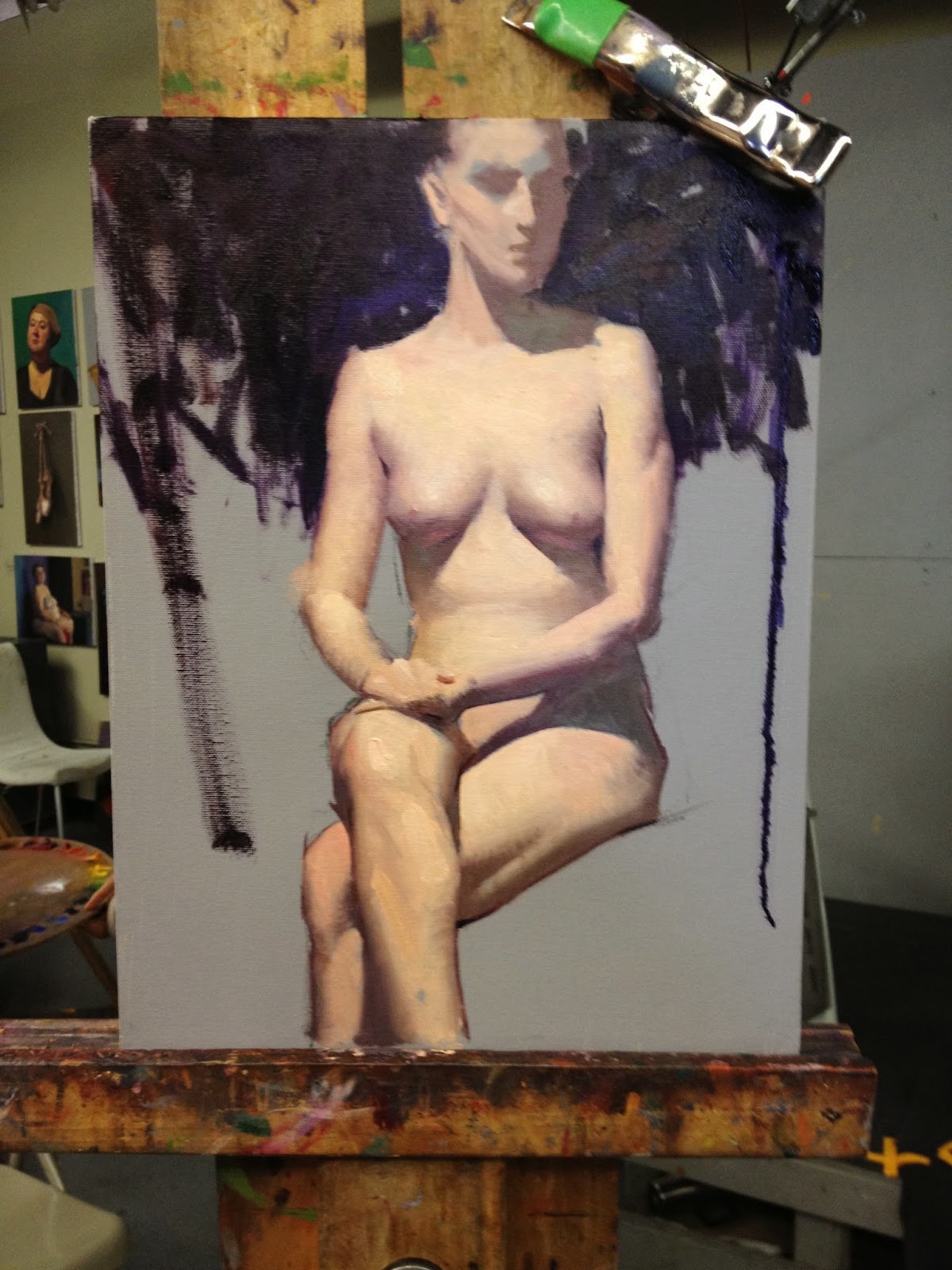 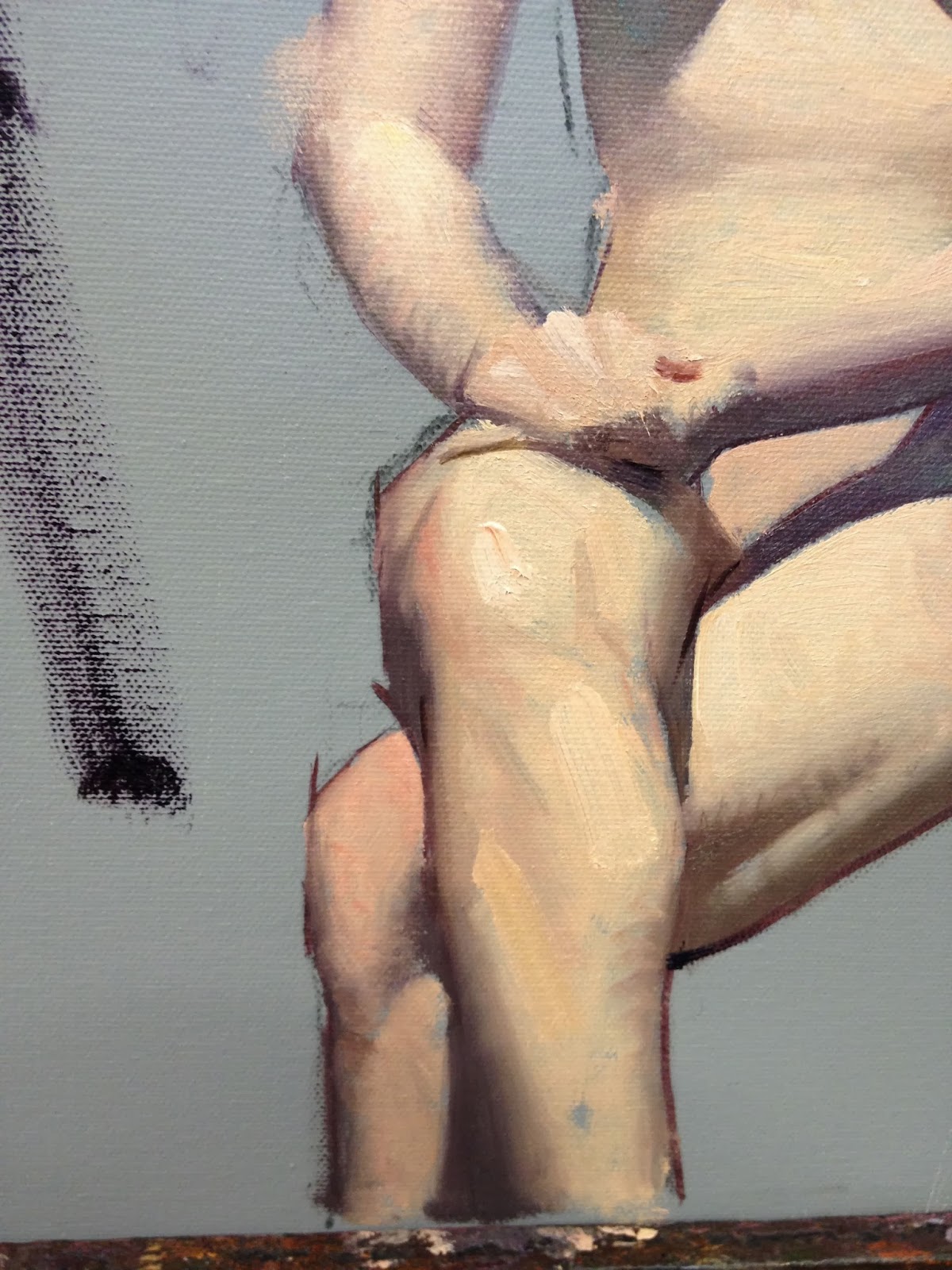 Daniel and I also talked about our love for Andrew Loomis and how important his books were to us in our formative  years and our mutual love for Nicoli Fechin, Daniel even owns a drawing by Fechin that he bought from Fechin's daughter. In short it was a great time and as always a learning experience that will extend beyond the time in the workshop. If Daniel ever offers a workshop in the future near you, or even at Incamminati I would definitely recommend taking it. 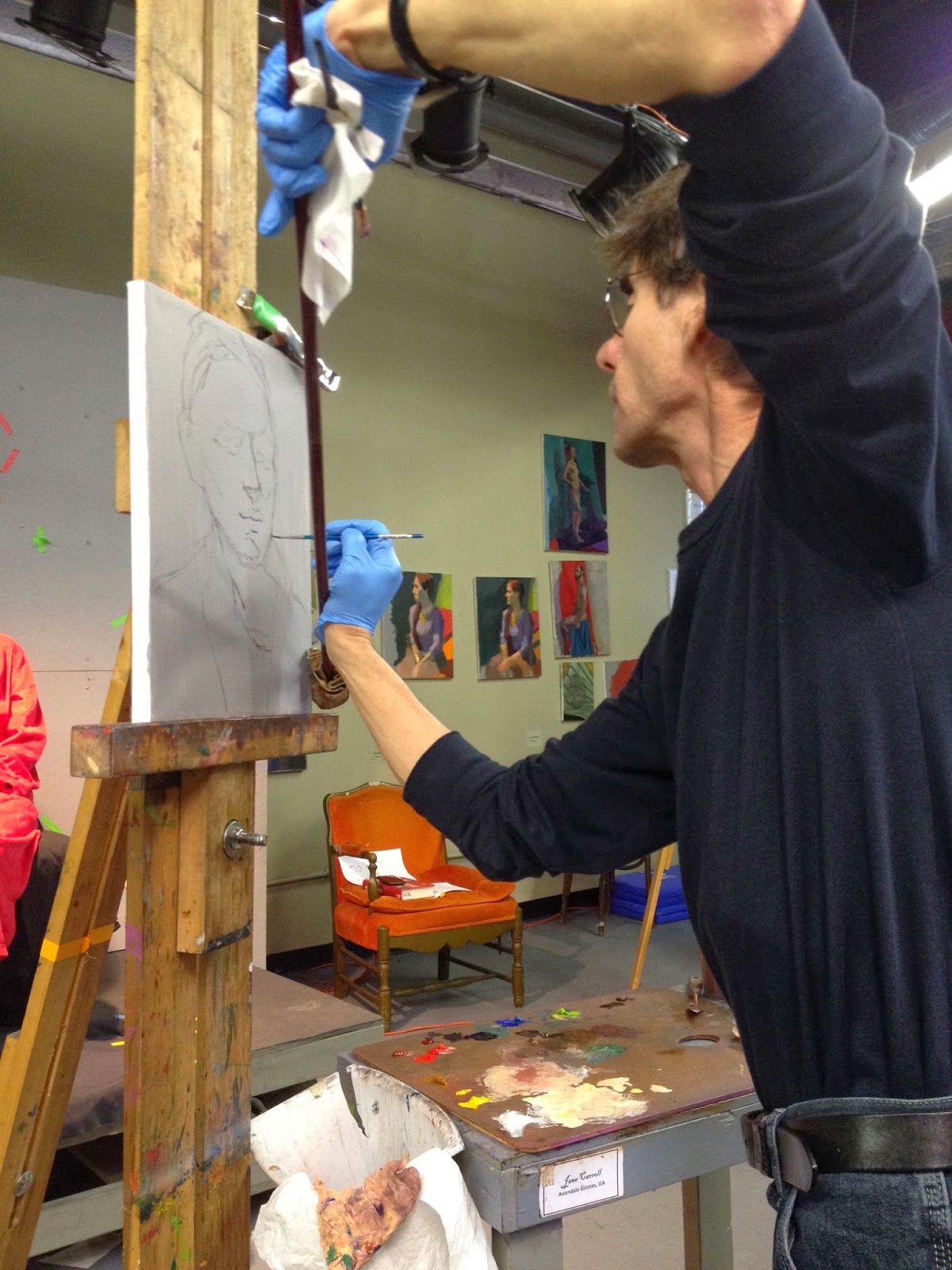 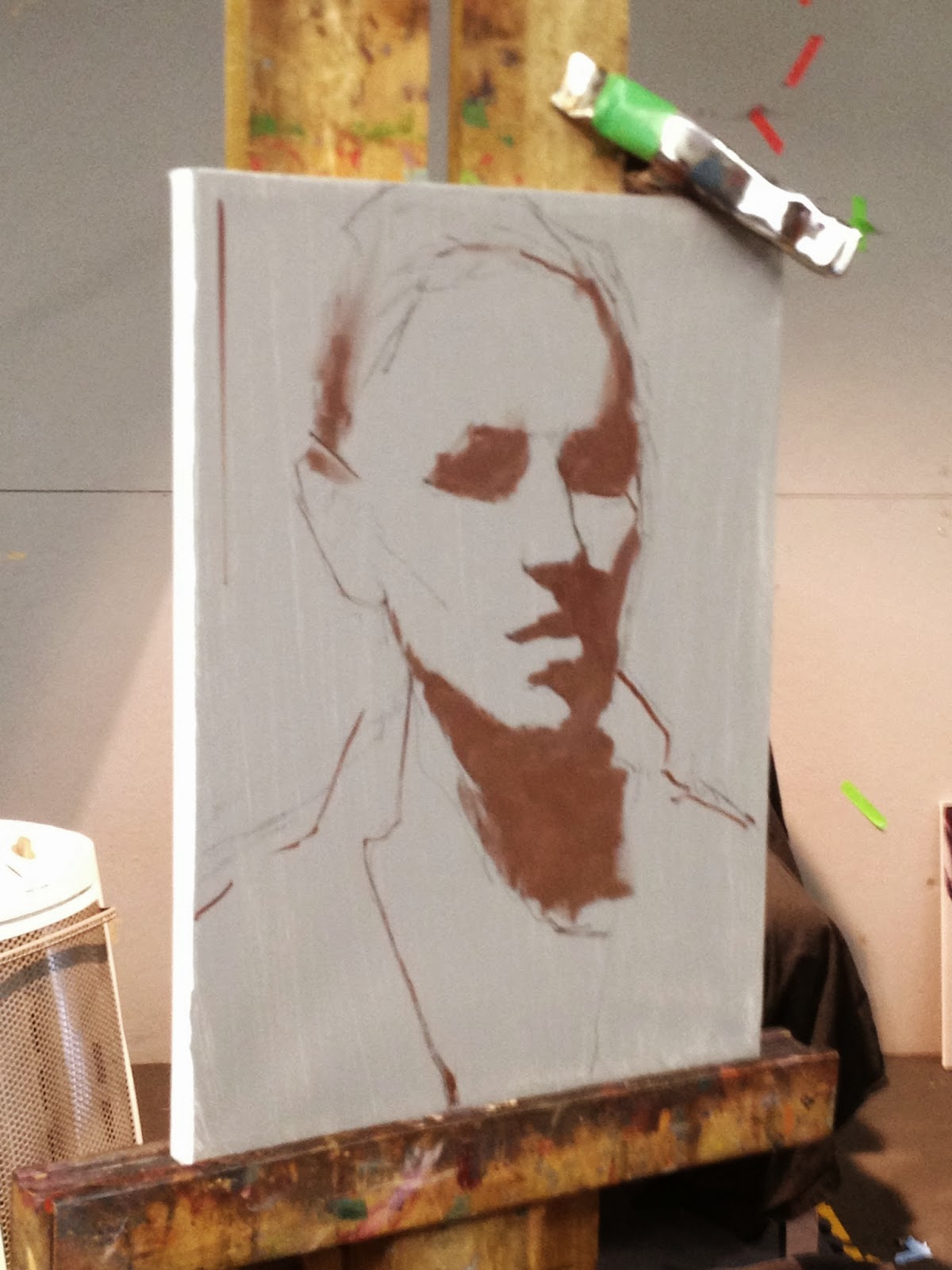 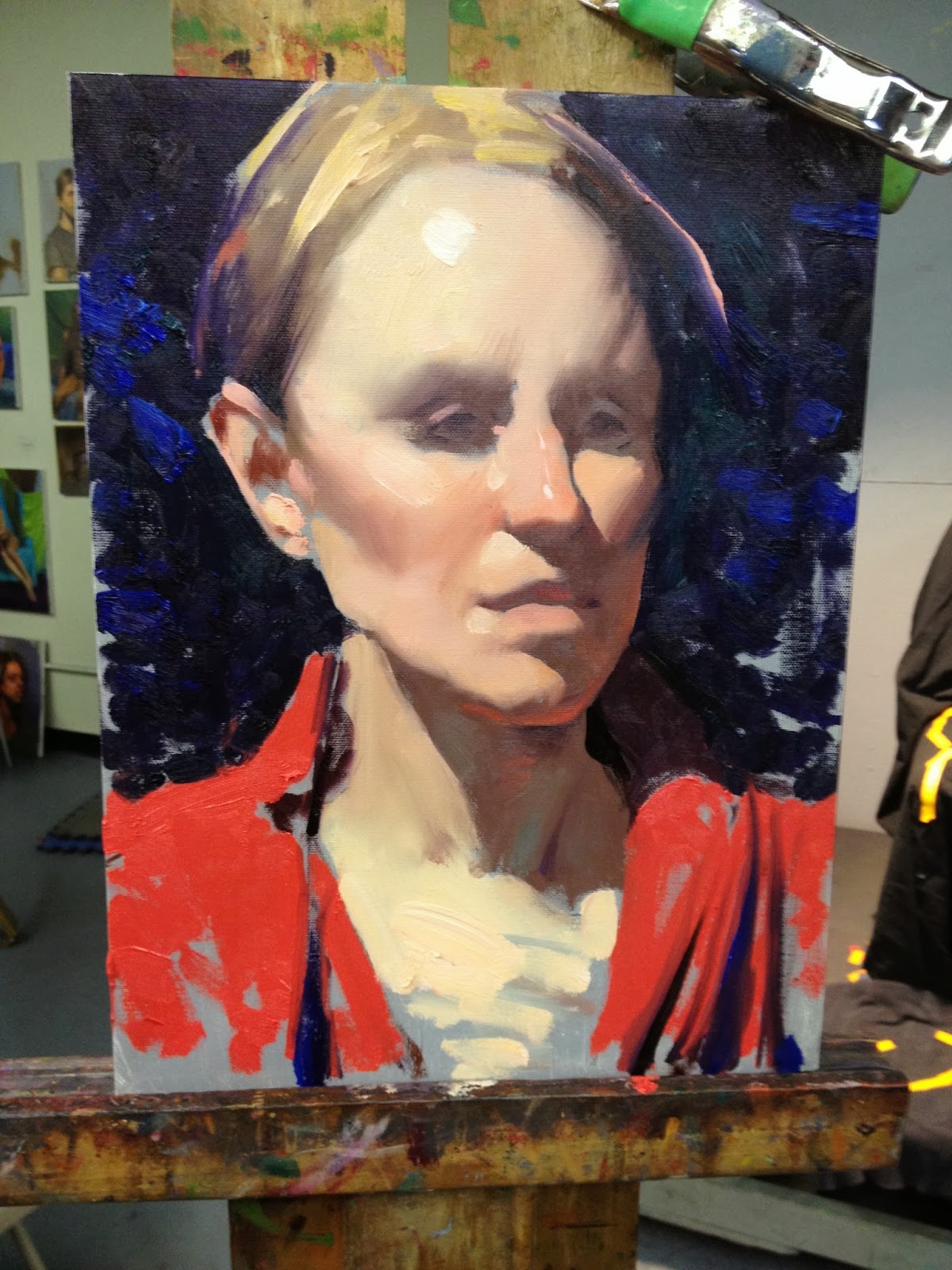 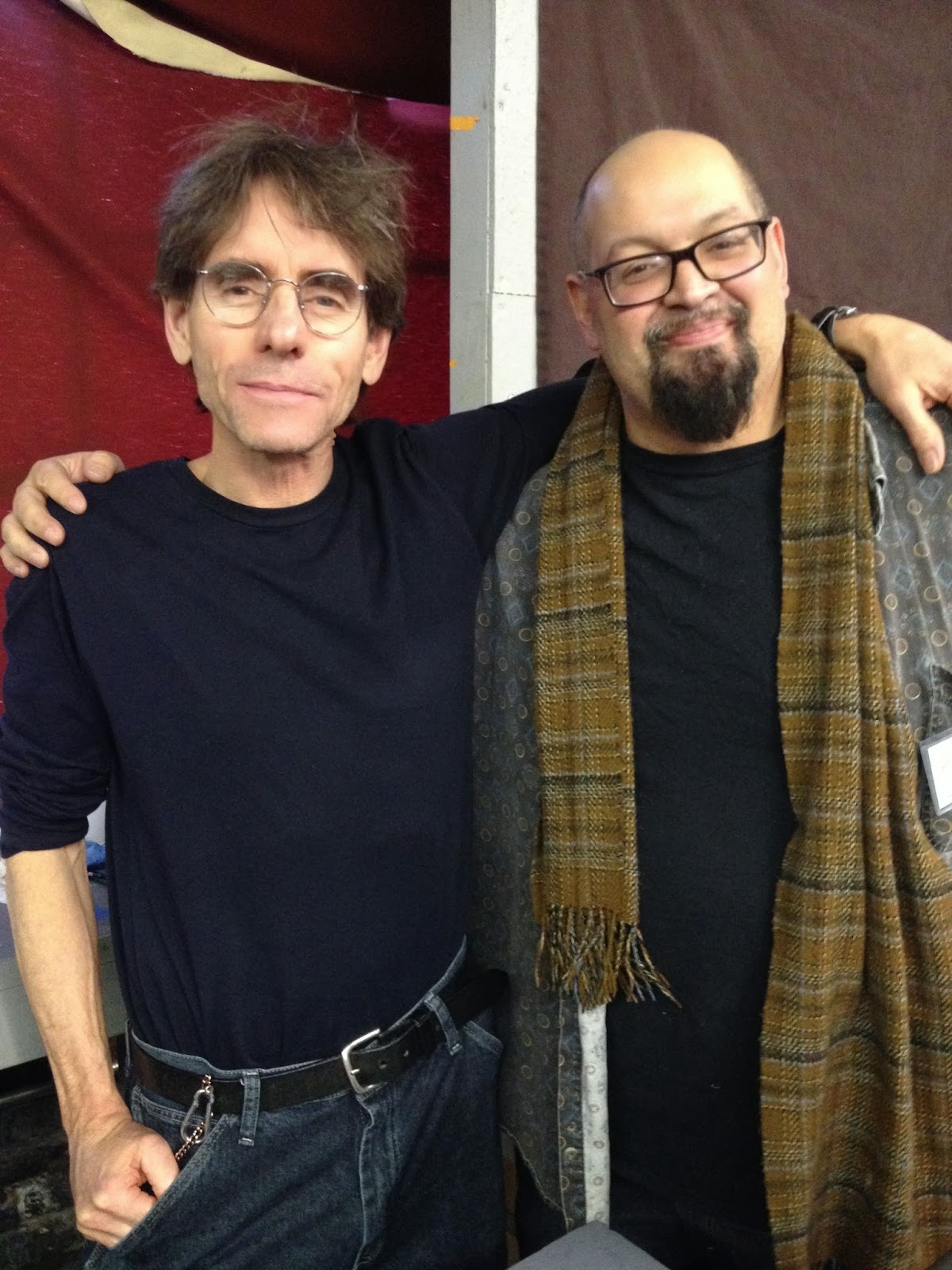 I've recently bought two more books from Amazon on the Repin Academy and another of the drawings of Fechin. It takes a while, at least a month to get them and they are not packed the best, no support, just stuffed in a mailer, but they are worth the wait and the prices, less that $30 makes them worth it. The academic drawings of the students in the Academy book are great as drawings that display both knowledge and skill but are often just beautiful pieces themselves. The Fechin books is fantastic and while I have seem any of these pieces in other books and I can't read Chinese, they are just amazing drawings! How he managed to work on that rice paper the way he did was something I have never seen equaled by anyone. 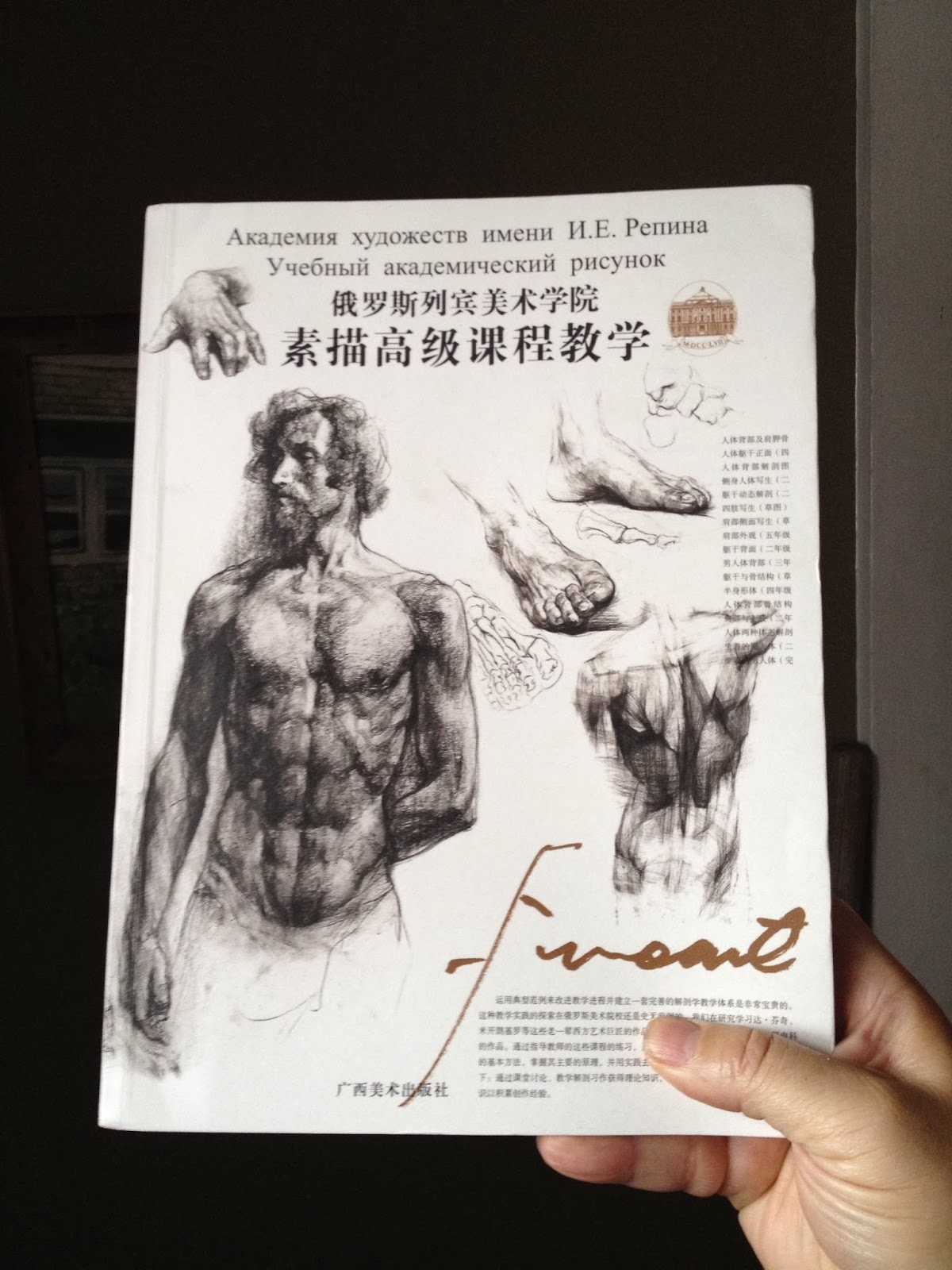 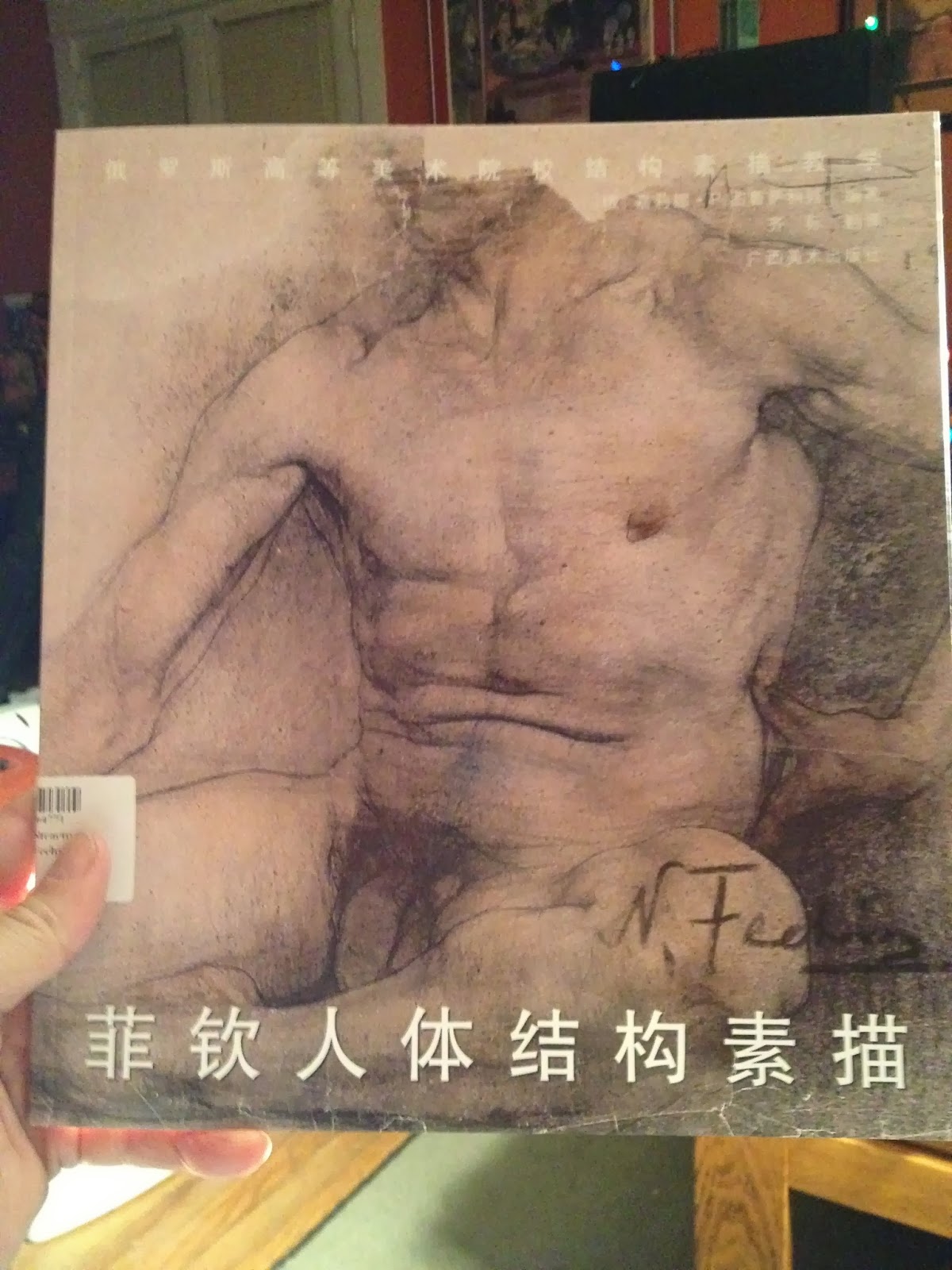 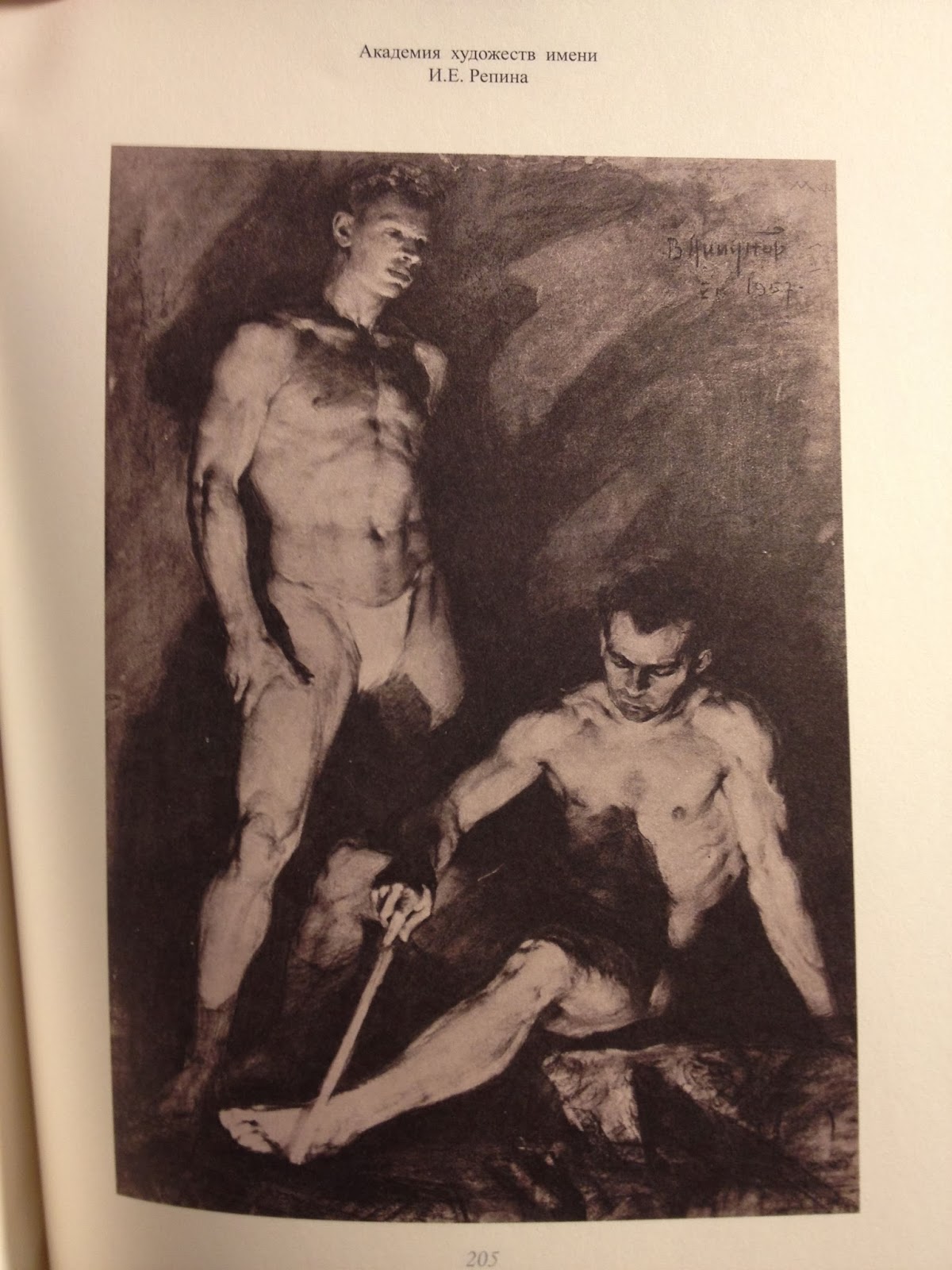 I've been teaching my Concept Design class out at PCAD as well this winter and its bee a lot of fun to teach this new class. I have a great group of eager students and the class time seems to fly even though it's 6 hours long. I usually start my class with a lecture on some artists like Syd mead, etc to give a history and link things together and then  we have a crit and break for lunch. the afternoon is mostly given over to the students working on their assignments in class. It's an 90 minute drive each way easily from my home to school but the drive certainly is very pretty and has even resulted in a few paintings and a zillion pictures.

My final semester in the MFA has been moving too. I am so ready to leave school at this point, more anxious to leave than I thought I would be, but I think seeing the light at the end of the tunnel after all of these years makes me want to get to the light even faster. That creepy little lady from Poltergeist is in my head chanting "into the light!"

I only have once seminar class this semester ,which for me is really very remedial. I have written artists statements many times and twice already in the MFA and done talks on my work for years at this point and this class is mostly about this type of thing. That's good for some, important, but for me its very remedial and well frankly--boring. It could be much more about websites ( which are the best for hosting) which programs to use, blogs vs Twitter vs Instagram,  business cards using social media to promote, etc, all very vital for any artist today--but then again--I'm already doing that!  So I just grin a bare it for 12 more weeks. 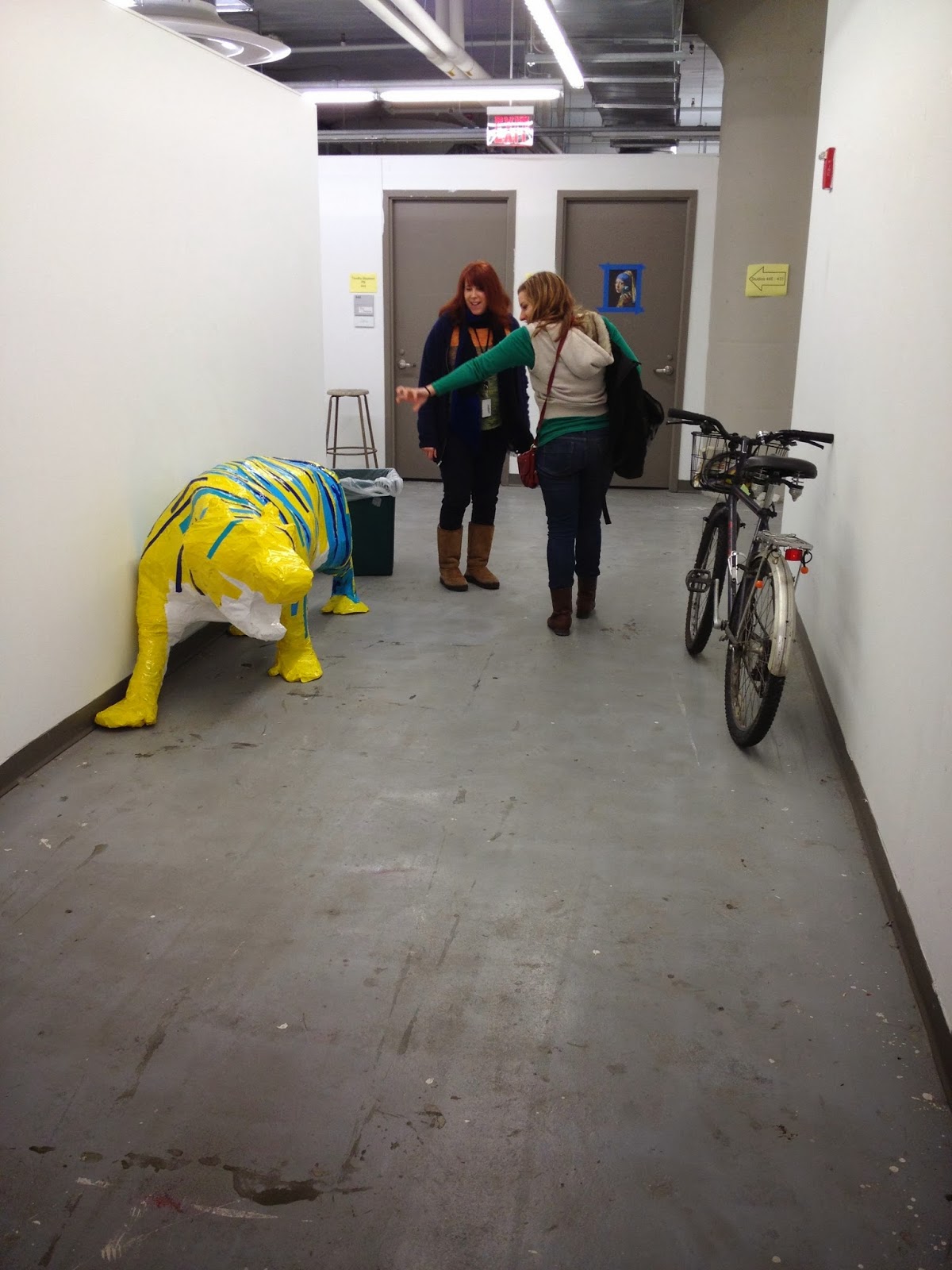 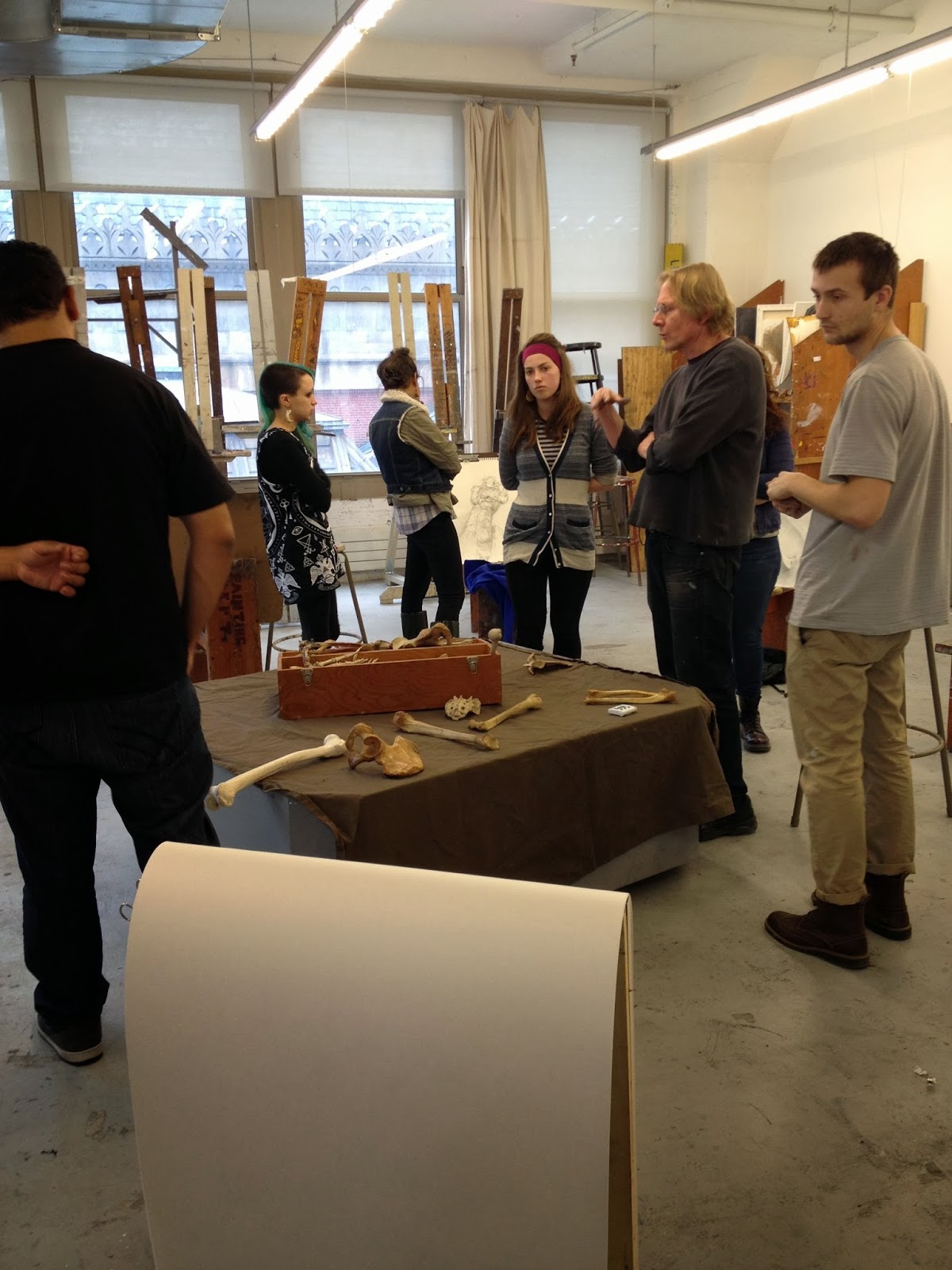 I dropped in on Scott Noels drawing class which runs right next to my seminar class and I soooooo bladly wanted to skip out and come over and draw some bones. I took in my new art books which Scott showed to the class and made fun of the work of the Russians and Fechin. Ah, some things never change!

I have debated about not even participating in the 4th Wall jury. I have seen 2 of them so far and since I a already exhibiting I don't see the use for me and I already know that based on the past judges that my type of work will not likely find favor. So my time might be better spent just painting as much as I can up till the day I'll need to hang my final ASE show. I have been enjoying some new MFA friends from the first year MFA class and hanging with some of my MFA 2 buddies. This makes it worth a lot of the little things I don't dig about the program. My first critiques with Denise and Martha went well, people seem to really love the little landscapes, so I have struck something there I really need to dig in on more. 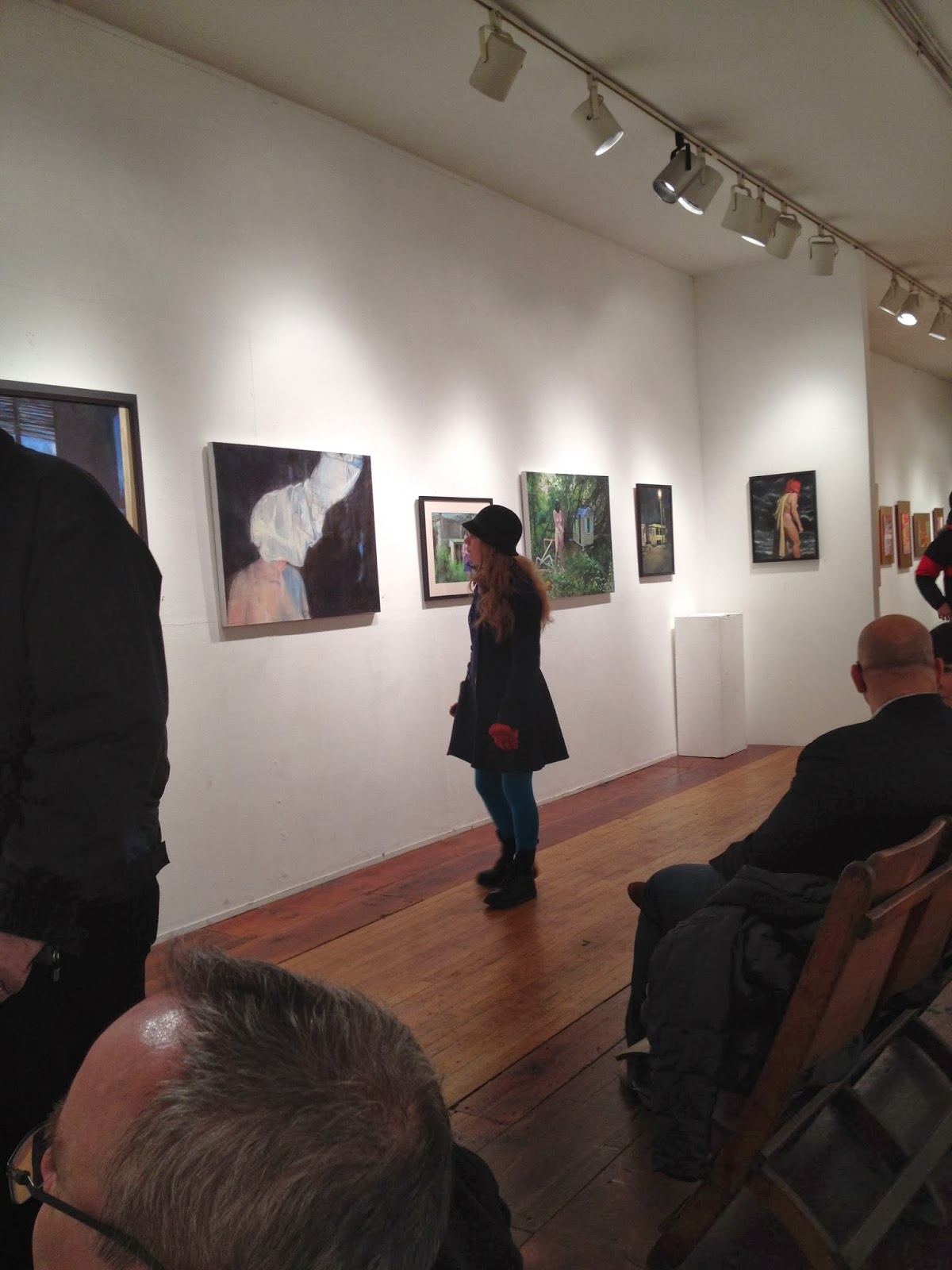 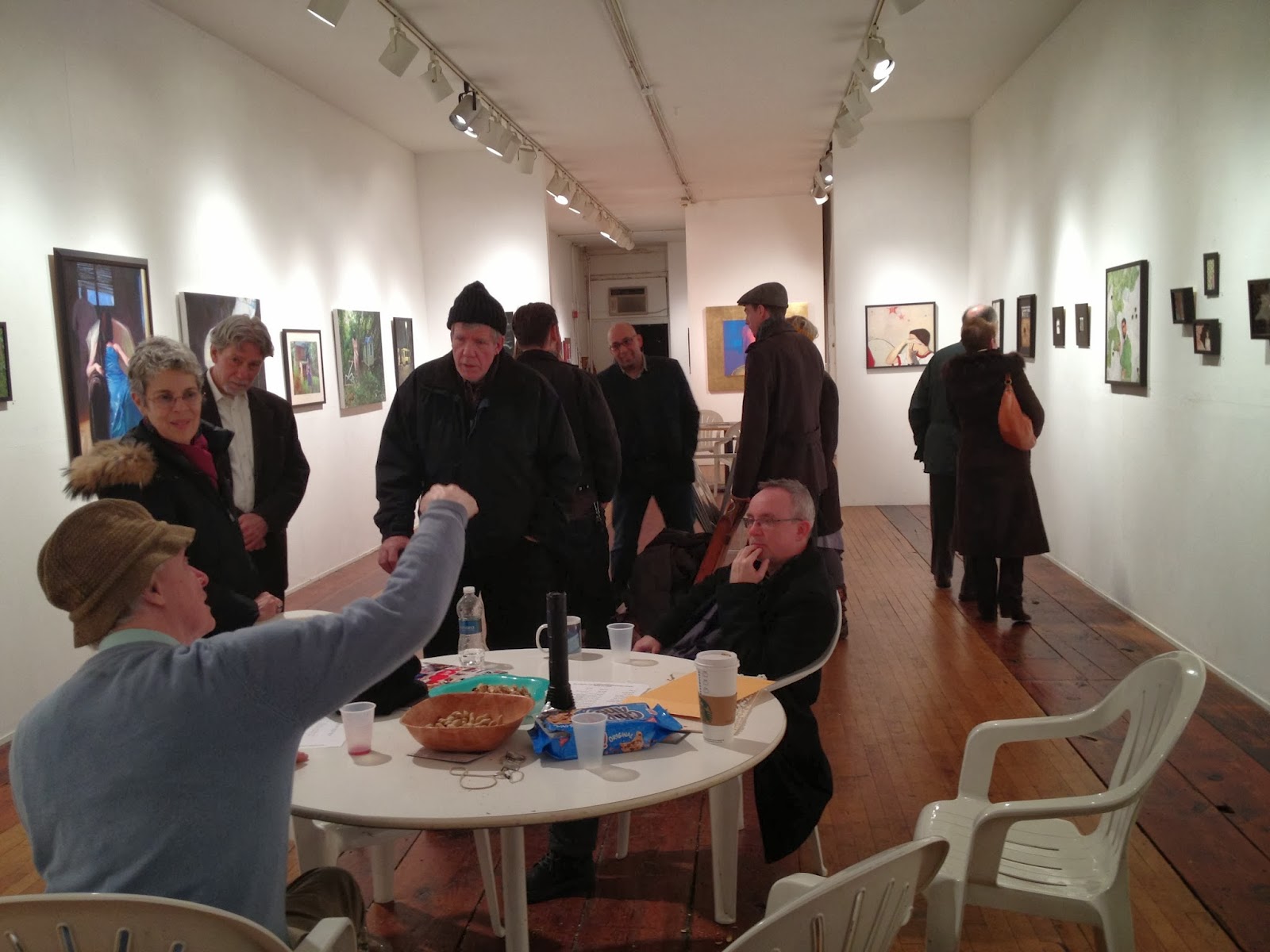 And to top off the whole Matterhorn so far is the groups Three Artsts  show I am in a Rodger Lapelle which opened up last night in Old City. LaPelle's new website is pretty jacked up at the moment so you can't really see my pieces there, so I'm posting the pieces here. We had a good turnout despite the cold weather and the fact that until yesterday the gallery only had half power. It was dark when I hung the show but thankfully the PECO crew who showed up as I was leaving Thursday did fix the power outage in the area so LaPelle was at Full Power for First Friday. I included several of the "bride' or the hooded figure series in this show and since I was asked sort of last minute after another artist backed out of the show. Jeanine Leclaire who helped Rodger run the gallery likes thes pieces so I put a few in and people really seemed to like them. 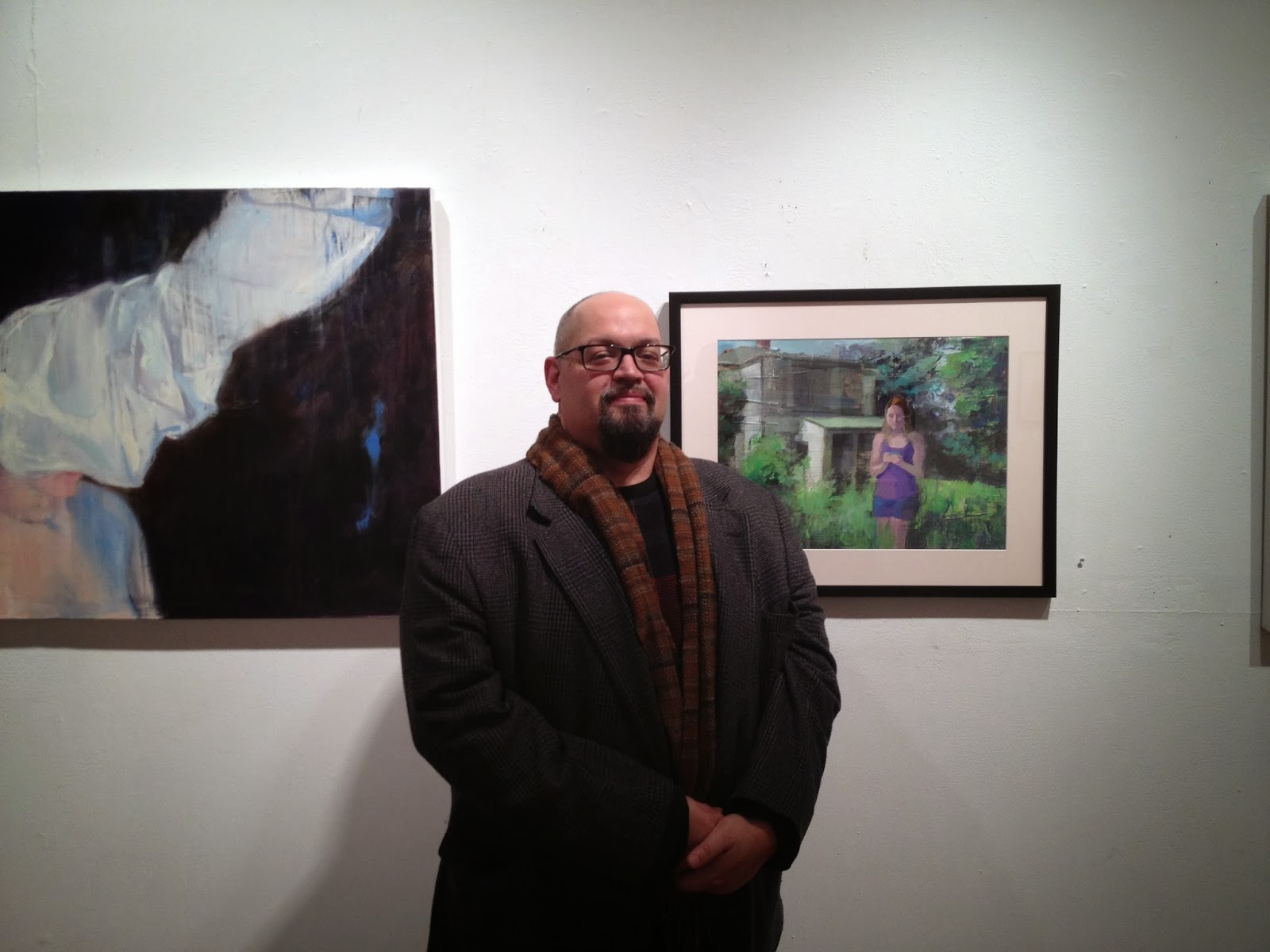 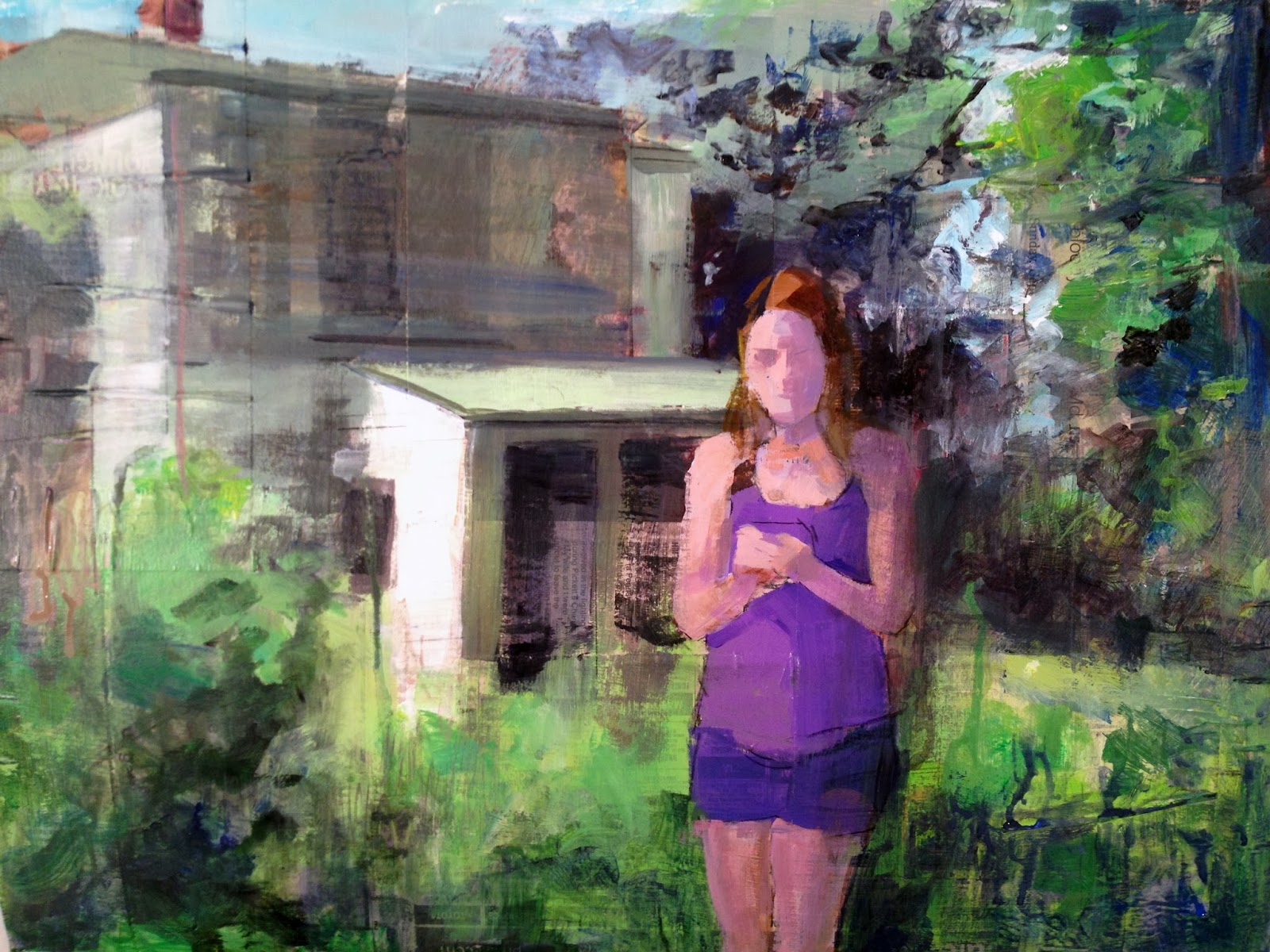 I was asked all night about them and what they meant. It was a very positive response compared to how they were greeted by many in  the faculty in the MFA crits, which was not so hot. So it felt good to get outside response to the work and the fact that people find them interesting--which is what I want. I want them to stop and think about what they might mean than have me explain what they might mean to me. I'll be doing an artist talk at the gallery tomorrow at 1pm. If you are in the astop on by! 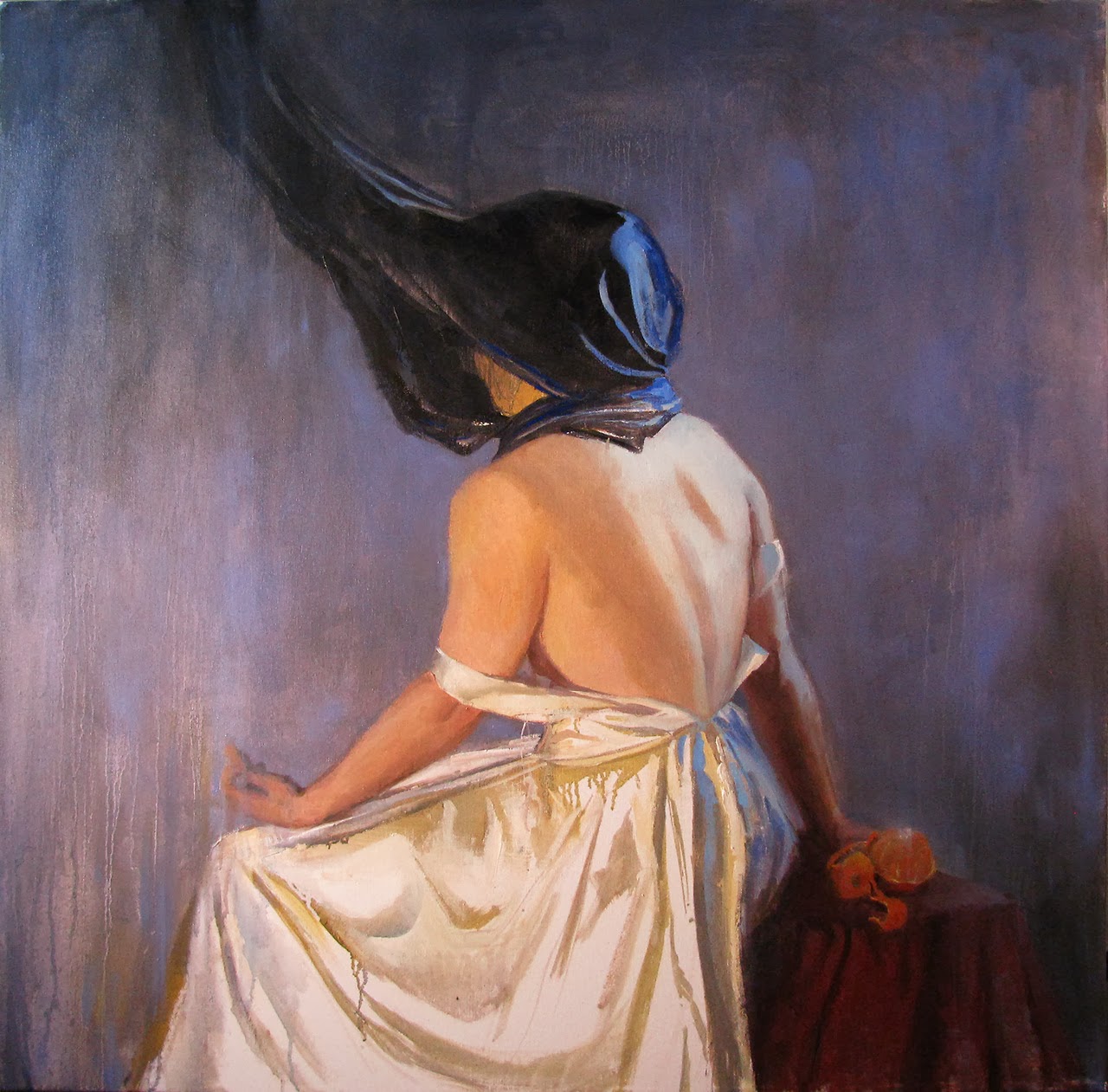 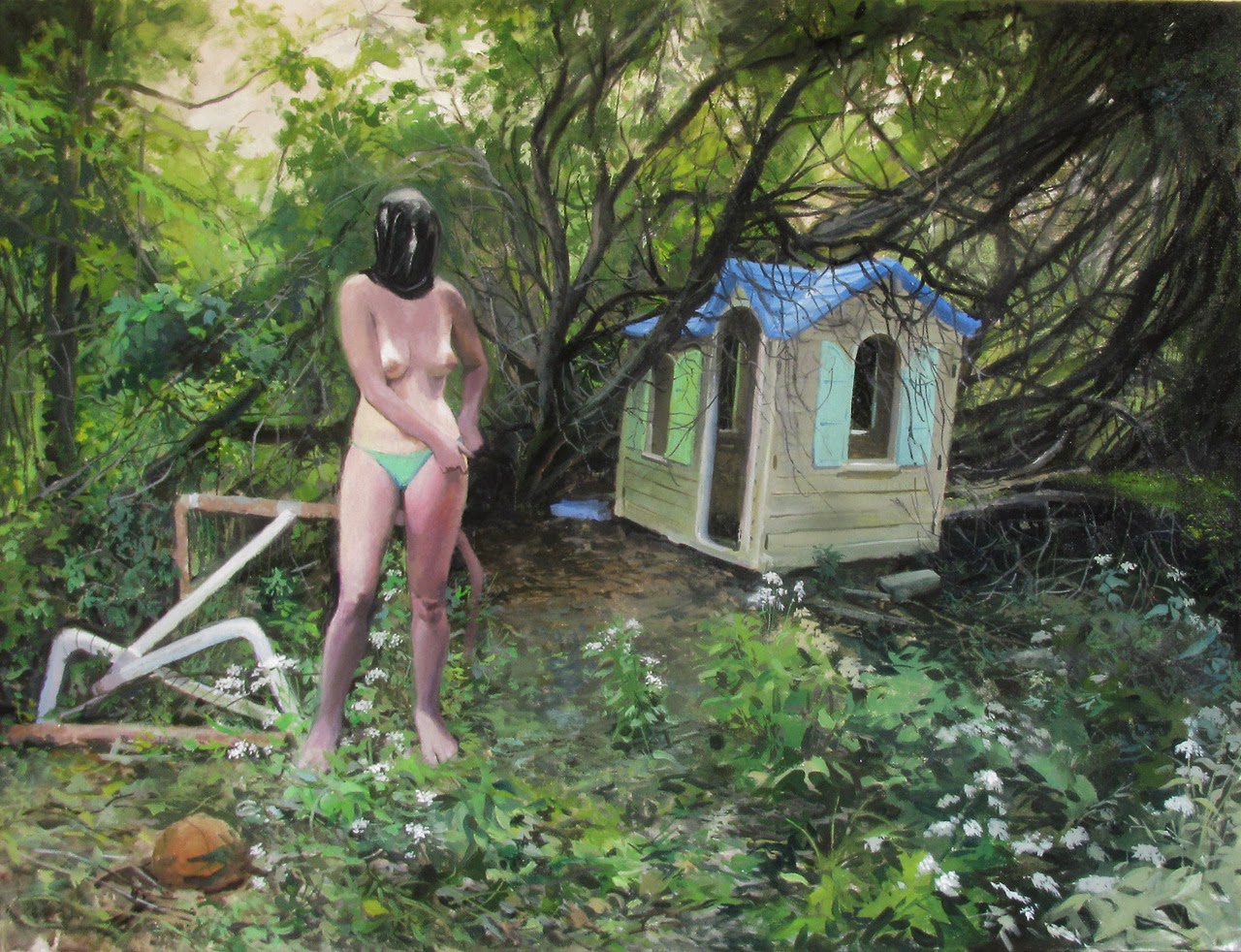