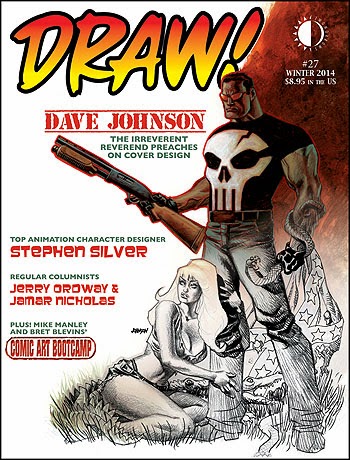 I just got my comps of the latest issue of Draw! which means its hitting the comic shop in your neck of the woods or your mailbox ( digital or snail mail) if you are a subscriber. This issue we  cover the "Cover Guy", Dave Johnson! From 100 Bullets to Deadpool, Punisher Max and more, Johnson gives us an intensive blow-by-blow on the creative process that makes him a top cover artist for Marvel, DC, Image, and others. ALSO: Even if you don’t know his name, you've seen Stephen Silver's work as one of today's most in-demand character designers, for shows such as “Kim Possible”, “Danny Phantom”, and Kevin Smith’s animated “Clerks” series. Silver even has his own Character Design App, and will walk you through his approach to creating the look for some of the most recognizable creations in Hollywood. Silver also runs his own school, the Silver Drawing Academy in LA which just opened this year. PLUS: "The Right Way, the Wrong Way, and the ORDWAY!" with new columnist Jerry Ordway, “Crusty Critic” Jamar Nicholas reviews art supplies, and "Comic Art Bootcamp"By Bret Blevins and myself.

You can grab a copy from TwoMorrows
Posted by Mike Manley at 9:28 AM