Back On The Horse 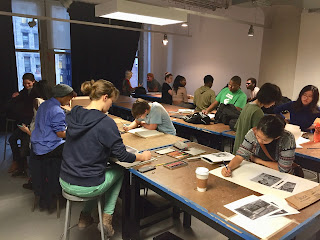 Its been of a break for me here on the blog for a little while now, but life or my artistic life certainly has never slowed down. Doing the two strips, Judge Parker and The Phantom keeps me busy with the boiler at full steam six sometimes seven days a week, as well as teaching my illustration class at PAFA in the After School Program. 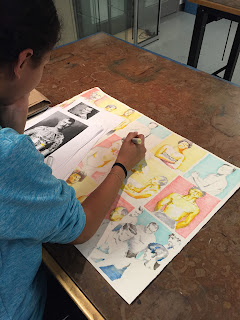 I enjoy working with these budding, young, talented and motivated artists! It also gives me a window into the young growing minds in the world of today, their tastes and knowledge and how they see the world of comics and art-life. Suffice to say they see the world in some ways fundamentally different than I did at their age. 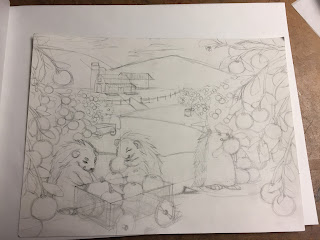 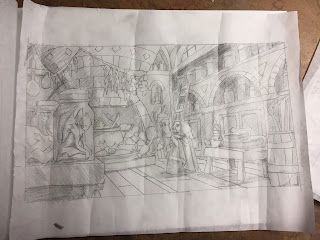 Some hard working students taking their thumbnails to the first rough stage. More changes will be made from here and another round will happen before the final comp and color comp. I believe in working on tracing paper and avoiding the digital for the developing student in the beginning to work/see the piece as a whole. Working digital often means detail over unity for the developing artist 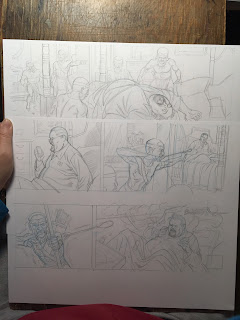 Some recent Phantom work, pencils and some Judge Parker strips as well 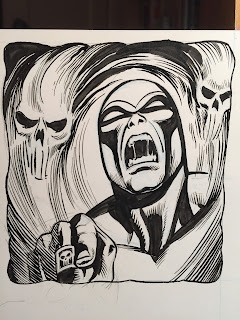 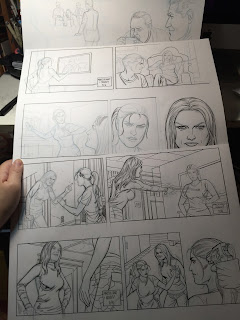 A lot of it has to do with tech, but also what they are exposed to in the run of everyday life. But one thing is the same for many--the dream of becoming an artist! This is where I come in and try to shine the light on the paths to take to get to the dream if they are willing to seriously work for it. Watching some students grow over the years is the best thing I think you can experience as a teacher. 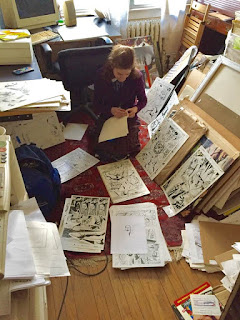 I have also recently hired an assistant who's right now organizing my comic art and will move on through my paintings, files and eventually my comics as I organize and thin the heard here. I'm certainly if anything mid-career as they say and I just have too much stuff, it happens to every artist I know. So at a certain point it either is an asset or a burden. I saw that when I was in Al Williamson's studio--he had an amazing collection to be sure, not only of his work but the work of others, the greats and strips clipped, stats, man, you name it. But at some point it went over the top and it was at point very unorganized and a burden that he both loved but worried about. So I figure time to make this art pile organized so its an asset, especially for teaching and my own enjoyment. This also means lots of old tech is getting tossed too--old computers, scanners, printers---ugh!

I am close to setting up my painting studio at home which will be separate from my drawing or comics studio. I'm taking the bedroom that has the best light, both north and west and will make that a separate place than my drawing studio where I do comics. I will be able to control the light better and even have models in.

I have also been thinking about changing direction in what I paint and of doing a book of my pen and ink drawings. I'm thinking about doing paintings more along the line of the Inktober pieces and not pushing the landscapes as much. I sort of feel the Plien Air" thing is a bit crowded and what I want to do --the urban thing isn't so appreciated around here. Its also the allocation of time vs return. I have stacks of landscape paintings and love doing them, but maybe less of that and more of the other paintings is where I will go for a while. I entered a lot of PA shows last year and was declined by most so that money might be better spent on fixing the studio and doing new work. I am also not big on competitions and want to paint what I find interesting.

I'm maybe more conscious of time now with the strips eating up the bulk of my time in the work week as well as the changing gallery situation here in Philly. I am also planning a limited enrollment on-line class for sometime this year. Maybe 10 students or less to start, and I am not looking to teach beginners or those with a lot of basic drawing problems, that would be a separate type of class,  so I will require a portfolio submission. This way I get students strong enough to take the info and build on it. One thing I am very set on now is that advancement  in art really must be based on ability. If the students struggles with basic drawings issues, those must be tackled and proficiency achieved in order to advance. The way most schools tend to run is that unless the student really flub a class, they go to the next year. But I believe now more than ever that advancement should only come with displayed ability--otherwise the student moves toward graduation without the skills they must have to get work.

I'm begging my third story arc on The Phantom and I'm three weeks in. Its been great working with the writer Tony De Paul in the past year. The stories are not only well written and fun to draw but he's the best writer I have ever worked with as far as helping with reference. That's a big deal on an 80 year old strip--believe me! The next story is about a vision Old Man Mozz has about the Phantom--and one that isn't good. I won't say any more but it will maybe be the best story I've worked on so far and will have many long time Phantom fans on the edge of their seat.

We are also wrapping up the Sophie/Band/Kidnapping story up in Judge Parker.  The story went in a way I did not plan when I sent the original plot to the last writer Woody Wilson before he retired mid way through, and its twisted and turned a lot with the new writer Francesco Marciuliano.

In recent weeks I'm contributing more now to the active plotting than before and I am now the one with the most knowledge and history of the strip, as I enter what is now my 7th year on the strip. The weight of these continuity strips his a heavy one. For instance in this story there is a visit to the grave site of Needy's and Sophies Grandfather, Ezra, who passed in 2003 JP time. I don't even have access myself to all the strips history but can have the syndicate send me weeks of something if I need it.

Now we have never been very accurate time wise on the strips for obvious reason. All continuity strips play fast and loose with time. If Sophie was 9-10 years old in 2003 now she'd be 24 or so and Neddy 3-4 years older wold be 30. Sam and Abbey would be on SSI. But nobody ages in strips, even the Phantom would be 100 years old now if we kept time. But in order to accurately draw the strip continuity wise I can't leave off the date on Ezra's grave as it was drawn on there by Harold Ledoux. That was established and is "cannon" as they say. Thus the conundrum!

So since I figure maybe it's 2011-maybe 12 or so in the strip, Sophie can s till be 16-going on 17. This is where the strips must break with reality as stories advance time in only one way--strip time not real time. Under Wilson there was never a Christmas strip with the characters, which we have introduced now, nor a change of seasons which I have introduced as well. The strips inch along year wise and many readers who are used to the way TV and movies work want time in the strips to run just as fast---but they never have or just about all the continuity strips would either have to take place in the nursing home or the principle characters would even be dead! Peter Parker would at least be in his 70's-wallop'n Web Snappers indeed!

I think the plan on the next JP storyline is to wrap up the missing and pregnant April Bower as well as her father and that will finally rest the long outstanding plot issues from Wilson's run.

OK, back to the Skull Cave!

Hello, I'm interested in sending a fan email to the creators of Judge Parker. I can't seem to find an address to which I can send fan mail. If there is one, I would like to be informed of it.

You can post it here as I am the artist and co-plotter.

Did the syndicate put the kibosh on anything you and Ces had planned re: the kidnapping plot? While I like Ces's work (and love him on "Sally Forth") this story has been rather more disjointed than I'd expect from him so I'm wondering if you guys had some ideas and then the syndicate nixed it and caused some unscheduled changes.

Dear Mike,
Sorry to get in touch with you on your blog, but I had a conversation with Leif S. Peng from Today Inspiration group Facebook page on Harry Beckhoff's work: I have several of his illustrations and tiny pencil sketches for sale, and Leif told me that may be something you might be interested in. If so, feel free to let me know via Facebook and I'll send you some pictures (I also sent you this message on Facebook messenger, but as we're not "friends" on FB, you can't get the notification that I sent you a message).
Thank you in advance for your reply.
Kind regards,
Yoann Boissonnet

thanks for sharing this article its so awesome and its very interesting. keep posting more
Surprised at VICIdial Contact Center