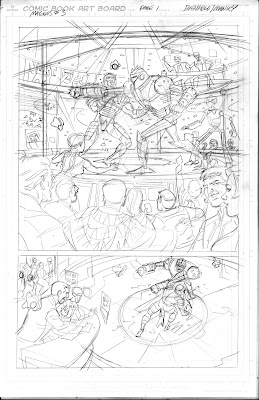 Magnus NO. 3 hit the stands last week and so I thought I would post some of the layouts I did that Bill Rienhold did finishes over. I am really happy with what Bill did, it is a great looking comic, the coloring by Wes Dzioba is one of my favorite coloring jobs ever. So often I am just really dissappointed by the coloring which can really destroy the art on a book and ruin all your hard work--but not here, Wes really enhances what Bill and I did. Unfortunately I am off to other things as due to the dreaded deadline doom Bill has moved onto doing a Magnus origin story--so no layouts will be needed to speed the deadline. 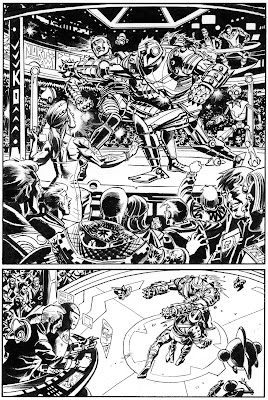 This was hard book to layout from Jim Shooters scripts, Jim is a guy who has definite ideas about how his comics should be laid out and that honestly left me at times kinda' hemmed in compared to the way I usually work. Shooter believes in the strict panel grid in laying out a comic, no bleeds, no inset panels etc. I hate the term "old School' but that might apply here--or maybe the world conservative would. yet artists like Kirby and Ditko worked most of their careers in the grid--did their best work with the grid--so you can still go good comics, I think however the past 40 years teh grid has been really blown out and much more cinematic and "designed" page layouts have become the norm.

I knew from working with him at Valiant Jim would not be going for that--so I was not surprised at the way he wanted the books done, but at times I felt honestly a bit constrained as I could think of much more dynamic ways to layout some of the scenes. But those were the rules on this gig and so I spent my effort on making the panels the best compositions, the acting of the characters and trying to make the layouts as dynamic as possible knowing that there might be changes by Shooter and that Bill would make the art look sweat--and he did. 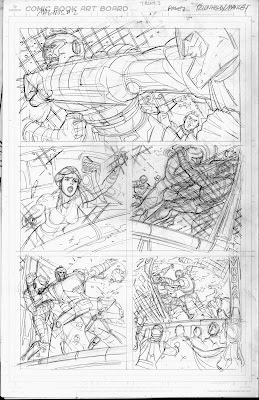 If you see this issue you can see there were changes to my layout. 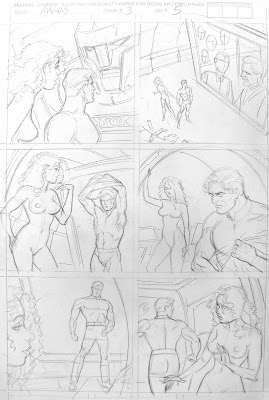 I was thinking that I would just knock the figures in and let Bill "dress them up' as at this time they were still trying to come up with Magnus' new costume. 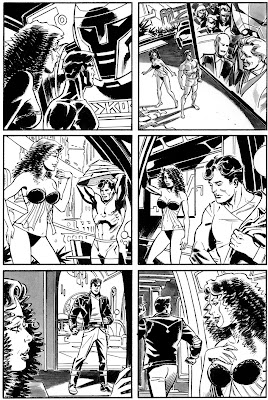 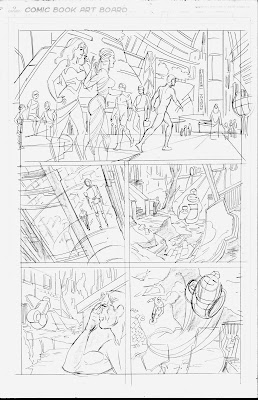 I got to do some fun future design stuff and again I just roughed in Magnus so Bill could add the costume when it was agreed on. My idea when laying out a page is the story is first, and I want to keep the figures and shapes of the background and elements reading clear. Strong clear gestures that can read in a silouette especially in panel 4 where Magnus uses his internal com-link to talk to A-1. 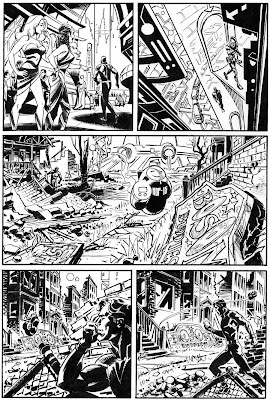 I'll post some more layouts in the next few days!
Posted by Mike Manley at 12:37 AM