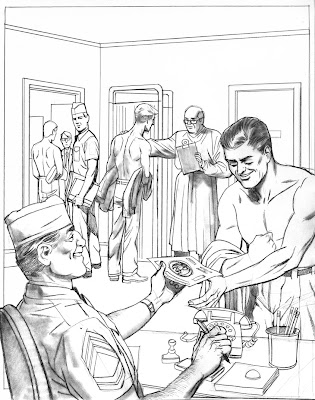 Here are a few penciled illustrations that I did for Disney for a Captain America storybook retelling his origin. The illustration above is from Steve Rogers being rejected as 4F in the recruiting office and meeting the doctor who will introduce him to Project rebirth.

I did the drawing and then Disney hired someone else to digitally paint the book, which I hear is out in stores now, but I haven't seen yet. Stylistically the job went through many changes as it went through both Disney and marvel and many hands. its started out as being more of a retro-feel, then they wanted a Ron Garney feel, then---who knows. one of the gig issues you deal with at times on licensing jobs like this, which all storybooks or any art featuring any character for kids books, bed sheets or toys, etc., is that you often deal with people who are in charge of making decisions on stylistic choices who have no real understanding of the characters, their history or what makes then cool in the first place.

This was a fun job overall, really the big issue on this was doing a lot of research on locations and historical reference as this also covered a lot about immigration, Ellis island and NYC history, it just wasn't Cap punching Nazi's. In fact that had to be played down. I have great fondness for this character and the work Jack Kirby did along with a lot of work by Colan, Romita and Buscema, so I had that to keep the flames high despite a few bumps in the road on the editorial end. 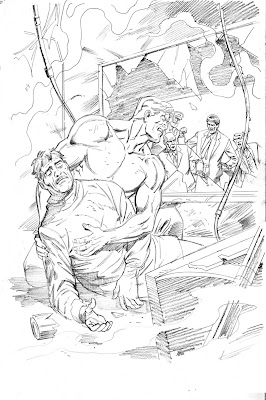 This is the scene after the saboteur blew up the lab fatally wounding the Doctor who invented the super soldier serum. 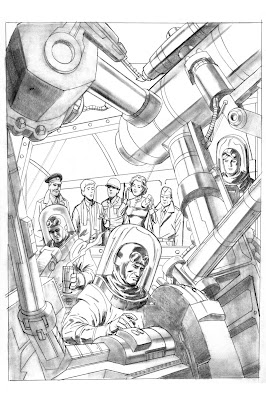 I loved doing this one and drawing all the Kirby machines, some of the illustrations like this one were based on panels from old issue of Cap, but I had to do a lot redrawing and changes to a accommodate the script, book layout and some of these illustrations had a dozen or more layers as every figure and every foreground or background element had to be done on a separate layer so the painters could split the work up.
Posted by Mike Manley at 10:00 AM

These are cool! I like the third one with the machinery.

Thanks, Kirby machines are always fun to draw!