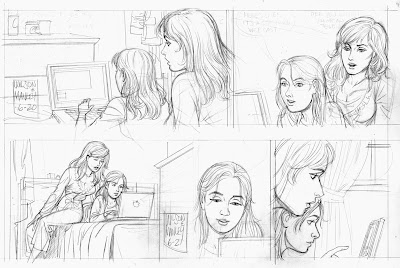 I thought I would post some of my pencils and then the inks to show the process on the Judge Parker newspaper strip. I pencil as tight as I need and really focus in on the expressions and acting of the characters based on Woody Wilson's script. I also rough in very lightly the lettering and balloons and put them in using Photoshop later. But I have to plan then out to make everything fit in and the eye-flow of the balloons to work correctly. One of the bigger issues for me is that the print version of the strips which run in the paper are really small,ny dad clips and send me copies from the Detroit Free press so I see what the strip actually looks like in the paper.

Strips are run smaller than ever to cram as many on a page in the average paper, this means that everything is smaller from the lettering to the rendering, however the strip also runs on-line on the dailyink website as well as in a lot of newspapers who have an on-line comic section in their on-line version of the newspaper. There the reproduction is a lot better, bigger and in color. What this chiefly means is I have to draw the faces big enough so you can see the expressions well. I don't want to draw a big-head or talking head strip so its always an issue I have to think about as I lay the strips out as I want some environments as well, they are as important as the characters sometimes. The idea I usually work with is to have a good set-up panel that shows everything in a medium establishing shot--and then I can cut in. We need to see Sofie's room and bed and computer at least well once in the strip in a few days worth of continuity.

Most anyone can read strips they missed on-line now, but I don't count on that to cheat set-ups. The other thing I consider very important is choosing the angles of the face to show the expressions clearly, variety of head size adds some visual dynamics as far as layout, make sure the shapes and overlaps are good and to make the female's faces and hair beautiful, appealing and attractive.

The inking is the easy part of the job for me and always has been. I've been working on making the hair more "Dallas" as in the TV show. I started thinking a while back that JP is kind of like one of those 8o's soap dramas like a "Dallas" so I should try and make the women more glamorous in that vein. I also worked on making the hairstyles work more for me. I could never deal with Abby's hairdo. I couldn't get with how it was done, it seemed a weird holdover from the 50's with a 70's twist. So I started looking at real actresses with similar hairstyles to really work it out.

I'm also looking at the great strip artists I admire like Raymond, Drake Williamson and Starr, all of those artists made everyone great looking and had a lot of great textures in the inking. I'm mainly using a Hunt 108 nib, a NO 4 brush and Pigmas markers NO 2, 5, 8, for all the inking, and do any corrections in Photoshop. I use the blacks as simple patterns to focus or hold the eye or lead the eye here. I'm also keeping the set-up in Sofie's room lighter than the much more dramatic lighting going on with the Judge and the suicide jumper in NYC.
Posted by Mike Manley at 4:02 AM

I was just telling you the other night that you were really knocking it out of the park with the strip lately (not that you've had a bad period!) Reading about your process puts it all together for me. The ladies do look more ... sweepingly glamorous without it being overcooked - perfect TV appearances. You never see Reba looking like a hot mess when she's in her kitchen making eggs - she's always done up to a degree.

I love watching this unfold.

This is great! And, I have been noticing you moving the strip to have more of striking resemblance to the days of Al Williamson, Stan Drake and Alex Raymond. I think the ladies of JP need to have that classic beauty to them. If I have one suggestion, I think Abbey's face is too thin. Especially in the chin area. I liked how Barreto treated her, with the classic high cheekbones. And, yes, her hair has always been a bit dated. Eduardo updated it, but go look at how Harold LeDoux drew it till he left the strip. It was stuck in the 60s/70s. Otherwise, you have done a marvelous job with the strip and I applaud the direction and the treatment of it. Keep it real and keep it sexy.

Thanks guys! Paul I think of Abbey more as a Morgan Fairchild than how Barretto depicted her. Every artist has his own take.

Mike, cool to see your process! I think when inking own own work, it would be boring to pencil too tightly. So much can happen, mostly good, when you start laying in ink!

Jerry, yeah, it can be boring if you go very tight, though sometimes you do fall in love with a drawing! I know most of the old school guys drew just enough to be able to finish it in the inks. Williamson actually penciled pretty tight and I think he felt then he could loosen it back up in the inks. Some guys like Villagran would really just sketch--then ink it all in with amazing drawing.

I always appreciate the process Michael:).
Do you draw several days of strips all at once, and how long generally do you spend on each daily or weeks worth from thumbnails to finish?

Thanks Bill. I usually do the strip in a day and a half, the Sunday in one day, a long day, sometimes I break it up over 2 days and color it the second day--I won't reveal my true speed lest my editor read this and take me to task :-0

I pencil them all out two up on 11 x 17 comic paper, basically on the back of the pre-printed blue line board.

These past weeks I am jammed up with so many things from exhibitions to taxes, so I honestly don't do thumbs except a quick scribble to plan the sunday, I just go straight to board and work on the fly.