This was a good, busy week for me. I had been fighting a bit of a head cold so it took a bit of edge off in the beginning of the week and then just like last year, now I know I will have this annoying little cough for a month after. But despite that it was a good week for art. Along with my DPC buddies and a few other friends I hopped the Megabus and headed to New Your to see two openings by two renowned artists, Vincent Desiderio and Jenny Saville. We also tromped around Chelsea and looked at a lot of good, weird and strange art at a lot of galleries. We hit Gallery Henochwhich had their new season show up and represents David Kassan and Kim Cougan, one of my current favorite artists. 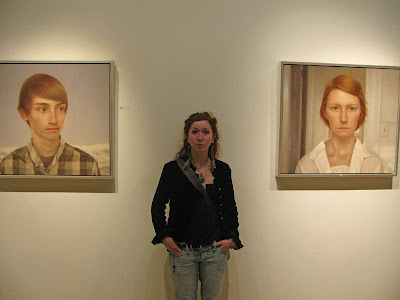 Alina posing between two painting by Lucong in Henoch--she'd make a great model for him! 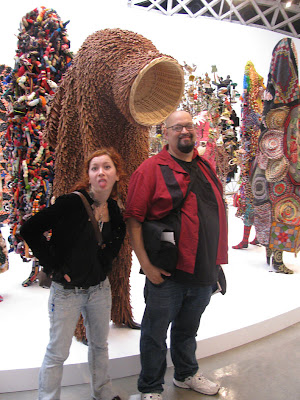 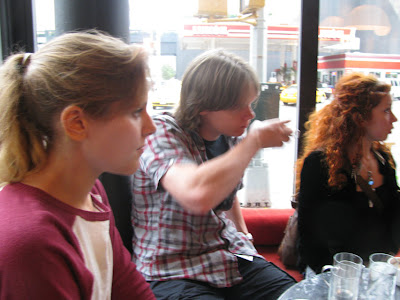 We also hit Elanor Ettinger.which closed their old gallery and has opened up an new gallery on 25th street in Chelsea and another location up town. They gad several painting by Steve Houston who's one of my favorite figure painters right now. 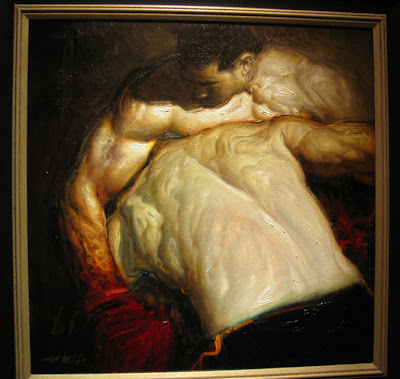 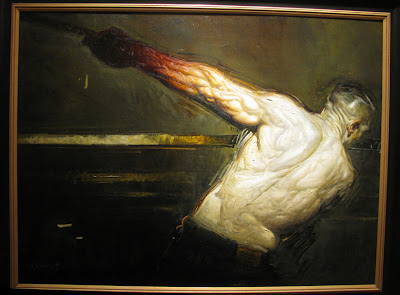 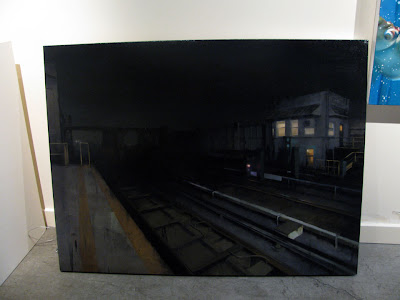 One of Kim Cougan's new painting they were getting ready to hang for his show. We saw all kinds of things as we walked around Chelsea, from Lego sculpture to 3D paintings--which we all really liked. 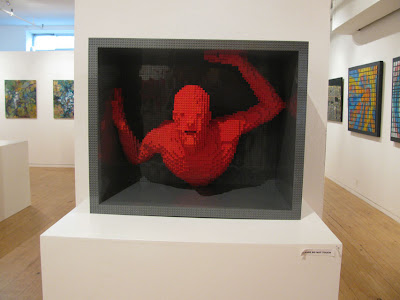 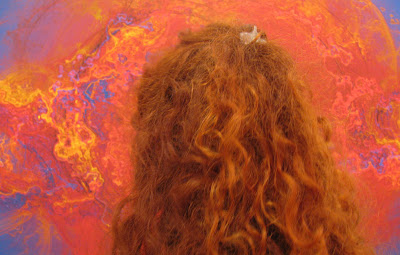 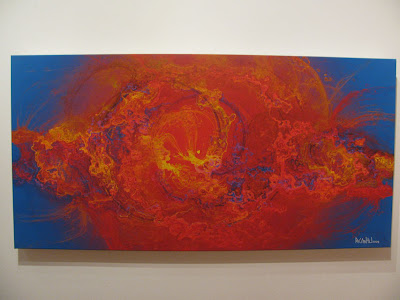 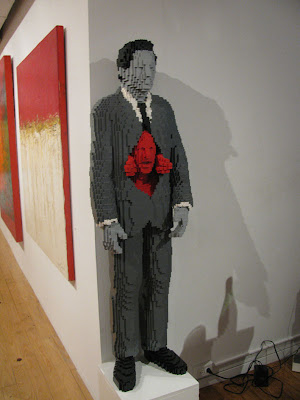 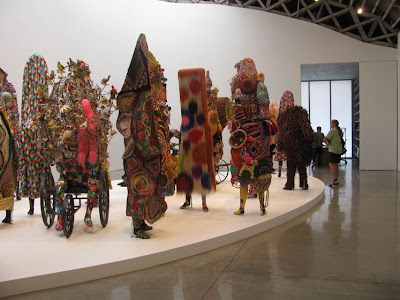 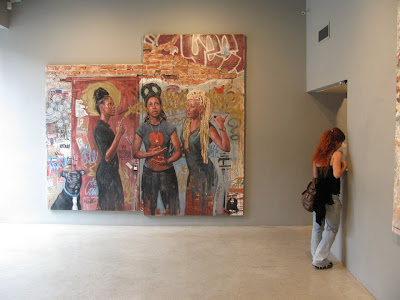 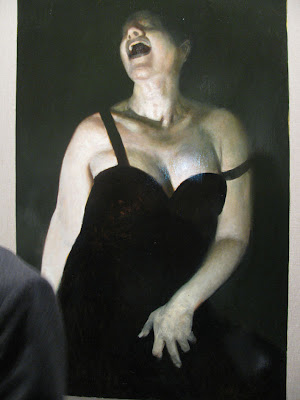 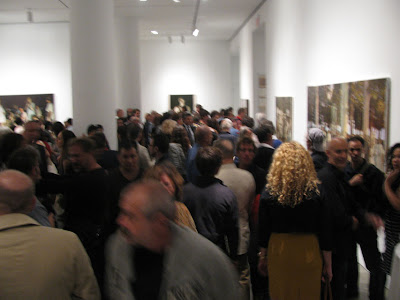 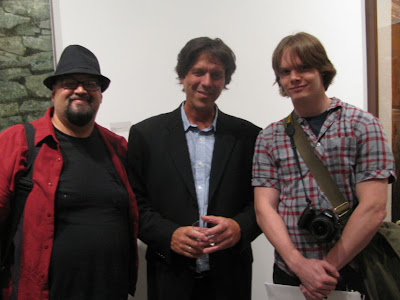 Yours truly with Vince and Will. 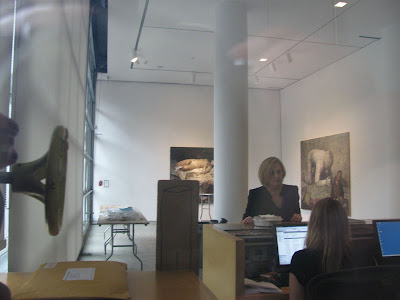 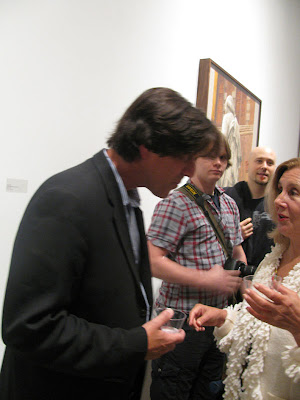 It was a fun day even though we had to jump around some off-and-on-rain showers, but the crisp fall-like air was great. It was great to see the new paintings by Vince, some of which he showed us last spring when he taught his workshop in PAFA. They were really spectacular, in some cases and I think this show was better than the last one I saw in Marlborough three years ago. It was interesting to see the textured surfaces in some of the paintings, Vince had talked about using both asphaltum and Rustoleum in working on the beginning stages of the paintings when I saw him last. he gave me a great critique and encouraged me to try using both--and I did many paintings last semester with the Rustoleum. There were several painting by Vince that had an almost NC Wyeth feel to them in design, paint application and subject matter--being paintings of old frigates or their masts. I think Vince is one of the most important figure painters today, he really demands attention with his intellect--his passion for painting--and his craftsmanship or as he calls it, his" technical narrative." His work challenges you to not only look, but think, its pretty or beautiful but not for beauties sake. Their are many paintings in this show of what appear to be asylums and almost circus freaks or something like Schlitze the Pinhead. I think all of this still resonates or is connected back to the theme Desiderio has been painting since his son Sam was born with chronic birth defects. Jenny Savilles another contemporary realist who's new show also resonates with Desiderios theme of suffering or "poetic discomfort' as I call it. We have several large canvases featuring the face of a young boy who's face seems to be a gigantic blow-up of almost a police or medical photo shot after a crime or before an operation to show the injury or abuse. It seems that all of these images are themes or images Saville has been exploring for a while, painting or repainting or revisiting them in a serial of paintings. 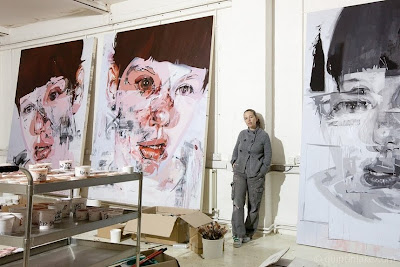 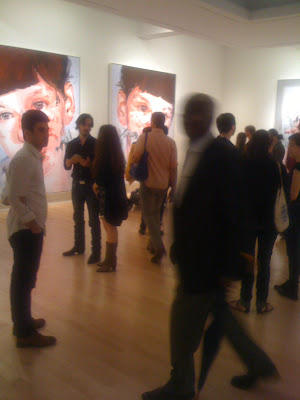 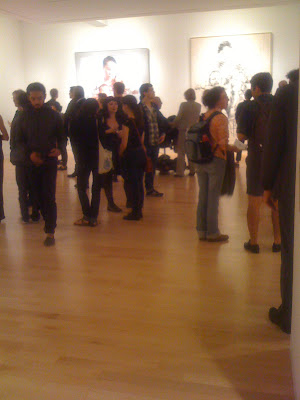 You can see Chuck Close in the middle of the picture as he moves through the crowd. 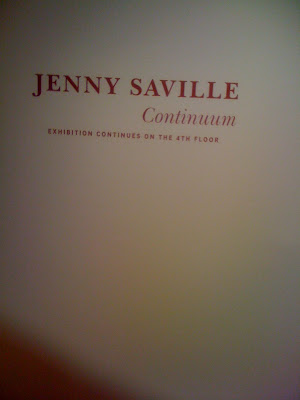 I like Savilles work, but I am also a bit repulsed at the same time, the powerful and lushness pulls me in, but the beat-up people repulse me too. I suppose that makes great art that you can't be impassive about. I think I like the drawings more, the large charcoal and pastel drawings of her "Madonna and Child" themed works head my attention the best. I am always a sucker for good drawing! Both shows were well attended, Chuck Close showed up at Saville's show just beforllee we left and I bumped into my teacher Alex Kanveski on the way out. We grabbed a burger and headed back to Philly and were treated to a beautiful sunset in the city. Everyone was inspired and we all hit the studio yesterday and painted away! 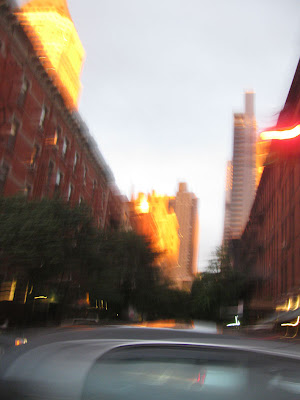 I really like that cellphone pic of the sunset-lit buildings. The saturated hues, the painterly effect of the 'streamers" and blurred parts