The pitching continued live in front of the audience and judges. And man, were these ideas pretty lame for the most part. Each contestant would give a 30 second pitch about their show, then they'd play a clip of some really terrible animation for the most part. The best clip animation wise was Piano Dog, but still really none of these ideas as presented had much of a story, it was just sort of things happening, none were very strong concepts in my opinion. 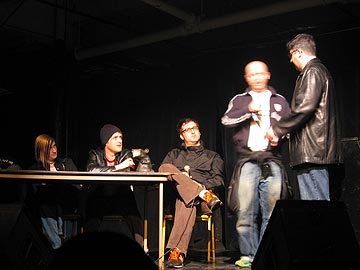 BELOW: But man, some people will do just about anything to sell a cartoon in Hollywood.
These young men removed their trowsers at the command of Eric Warehiem, who obviously enjoyed his "casting Couch" position as did the roaring crowd. 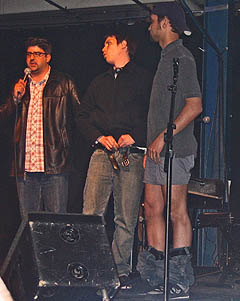 BELOW:These contestents pitched two ideas, both of which were funny ideas, one was called Super Scare Squad about a bunch of cutie-pie monsters that....scare people and one about action figures who have 24 minutes each week to save the world before they disintigrate after being freed from their packages. This I thought was the best idea of the bunch but had a terrible clip. 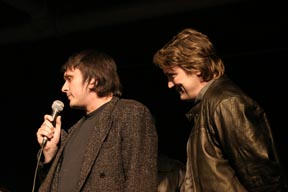 The smartest guy as far as pitching was concerened was the fella who picthed Piano-dog. He brought "pitch art" with him which he flipped through in his pitch and then he narrated his clip which had the best animation, which looked like it was done in After Effects. The style was sort of Yellow Submarine meets Sesame Street. 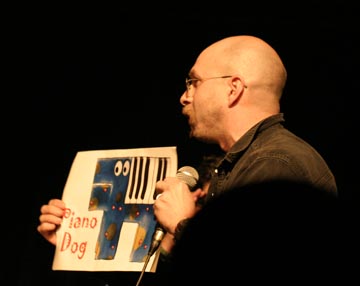 The judges often looked confudsed when watching the animation on the screen and listening to the picthes from the contestants. 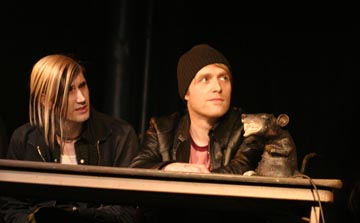 After the contestants were done, many who's names were called being a no-show, the judges went backstage to choose the winner and the cabaret show began. I noticed Doc Hammer had a cool Skull belt buckle, and later on stage when heckled, The Hammer told the heckler to come get a piece of "this"-- Ouch! 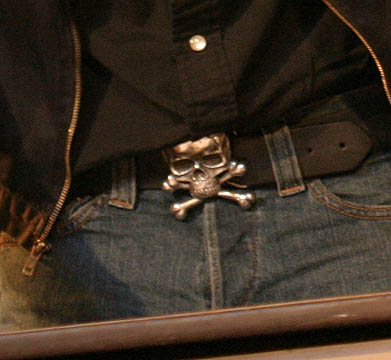 ...where can I get a Skull Buckle like that?