What we can learn from FRANK ROBBINS Part 1 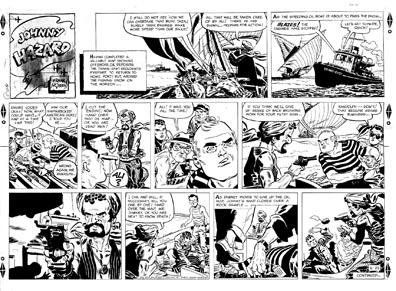 I thought I would start a bit of a discussion on the subject of Frank Robbins, who may just be my favorite cartoonist. Sure I have many other artists I like more in other respects, Buscema for instance, Kirby, Moebius to name a few. But for his overall work, his esthetic, boldness/inventiveness and great skill with layout/storytelling and black placement, raise him past a mere Caniff imitator and in my book he surpassed Caniff as a draftsman, he had way more guts and vitality in his work, vitality he maintained from beginning to end of his career when he stopped drawing and writing Johnny Harzard in 1977 and retired to Mexico.

Again another thing to admire about him. He didn't grind away till 'old-man' drawing robbed him of his art, the long slow public slide of ability. No sad old "alkie", mean and bitter, or sad and bitter which was the fate of many old cartoonist, especially comic book artists. Nor did he ( that I'm aware of) "ghost out" his work having a handfull of assistants doing work for him like many cartoonist did and do, some even eventually giving up their strip to their "ghost" all together.

So though I don't really rank artist in this way I think Robbins is my top guy. I say this because I find myself looking at his work more for both study and at times inspiraton than any other cartoonist.

When I was younger, far younger artists like Neal Adams were my gods, more realistic guys, being young and foolish, immature really, I gave artists who drew more "realistically" more creedence. It seemed being 'correct" or "realistic" was more important to me for a while. I still loved cartoonie stuff, Chuck Jones cartoons and Jack Kirby. But it seemed to my young mind the realistic guys had an edge.

Yet though I ate everything Neal Adams, buying all his books, even the ones he just did covers on I still loved Robbins' tippy-toe' weird versions of captain America which was so anti-Kirby, so anti-Marvel. Though Kirby himself was also heavily influenced by Caniff as well early in his career. As a teen I couldn't really understand why I liked Robbins. I also was just not aware of the history of comic strips and Robbins' stripwork on his strip Johnny Hazard, or even the "father or cofather along with Noel Sickles--Milton Caniff beyond a few Terry and the Pirates reprints in a book on comics.
Here is a bigger copy of the Johnny Hardard Sundayfrom 1958 I own. This scan is at full size.

(it just occurred to me that I may have never used my name here, so I'm Matt. . .pleased to meetcha)

I've had a really peculiar relationship to the Frank Robbins thing myself. When I was a kid (I'm 34) my buddy Joe (comic writer Joe Casey--do you know him?) and I drew comics together, etc., and we read the Avengers and the Invaders pretty religiously.

I was a big Captain America fan, and I was into the very bulky Kirby-style stuff, then later the Art Adams kind of super-detail. Frank Robbins' characters always looked strangely alarmed, kind of bony.

Now looking back at those Invaders issues (one of the first things I bought on eBay), I think they're brilliant. I just wasn't prepared for such beautiful, supple and expressive figures. I wasn't old enough to intuit Batman or Captain America as having any emotion other than what was expressed directly in the dialogue.

It seems to me that Robbins is a great gestural artist, that he's sort of communicating twice in every panel. A character may say "I'll make you PAY!" but there's always sort of a hesitation or second-thought expressed in his figures. I love that.

Nowadays, I'm fascinated by his inking and his beautiful black-spotting. I like him better than Caniff, too, though I think Caniff's great.

So what are the dimensions of that Sunday page? Thanks for posting it!

Phil here, I met you very breifly at a Philly-Con a while ago, and also at Noodle Soup (i was a designer on VB). I just wanted to say thanks for posting this sunday. Stephen DeStefano introduced me to Robbins' work and I love it. I have a small little collection of dailies, and hope to pick up a Sunday at some point. Looking at his drawings is like a syringe full of drawing class. His inks are ridiculous.
So yeah, I think my rant is over. Thanks again- P

When I think of exotic foreign locales and two-fisted spies duking it out with bad guys under the watchful eye of opium-smoking double-agents, I think Frank Robbins. - mh
http://www.gispyonline.com

Awesome! I've been a fan of Robbins' work for some time now, but I never really found people who liked his stuff! Thanks for the post! I've always enjoyed Robbins' stuff a lot and have been trying to get my hands on his work as much as I can. Not only did his Shadow work make an impression on me when I first laid my eyes on it, it was also my first exposure to his work. It was definitely a revelation when I found out he had this whole bunch of Johnny Hazard stuff as well! I actually have a blog as well with a spotlight on Frank Robbins! Have a look if you get the chance! http://comixrant.blogspot.com/

Wow, how nice to see some attention paid to Frank Robbins. My first exposure to him was when he took over Captain America in the mid-70's. It took me a few issues to get his artwork (I actually hated it at first), but I realized I loved it when another artist took over for an issue (the one after Steve Rogers gave up the Nomad gig and reverted to Cap) I found I was immensely disappointed, and from that point on I bought everything I could find (not enough, unfortunately) that he made. The expressiveness of his characters' faces and bodies will never be matched. When I heard Marvel was coming out with a 2nd Spidey book (Spectacular Spider-man) I prayed Robbins would be the artist, but unfortunately his work wasn't as appreciated as Sal Buscema's. What a shame... .

Stumbled across this post when I was doing research for a review for my online comics magazine, Comics Bronze Age. Like some of the other commenters, I HATED Robbins art when I was a kid. As I reread and review The Invaders today, I'm shocked to discover how much I like Robbins work now. I can totally picture his style on an Ed Brubaker crime comic! Anyway, thanks for the appreciative post about Robbins.

i love Robbins. You always hear the same thing concerning his art. "I hated him as a kid but now I finally get it".

I am also a fan of Frank Robbins. His work on Cap, the shadow are some of my favorites back in the 70s.Would love to have Johnny Hazard compilations but they're not available around here