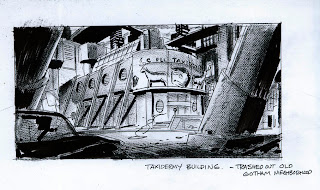 More from the archives! I came across a stash of designs from when I worked as a background designer on Batman Beyond. I liked that show and it was a fun ride before I moved on to do other things like Kim Possible, Samurai Jack, etc. The show of course was set in the future where Bruce Wayne is old with a bad ticker and need s a young replacement--which grew out of the demand from the toy companies for a younger kid Batman because they thought that would sell kids toys. because, well, you know Batman has only been successful with kids because they were dumb to like an old guy dressed as a bat. But anyway I think the Dini/Timm  crew did a good job on what could have been a real turd idea. 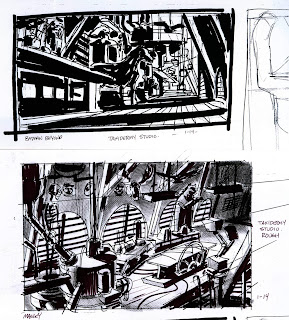 I came on as BG designer on Superman shifting over from boards when the shows were all boarded but they needed background artists. Comics is such a great training ground that doing BG designs was an easy shift and a lighter workload than doing boards. I worked long distance via fax with George Stokes the background supervisor and he was my go-between with Glen Murakami who was the art director on the show.

I would send in rough design along with a few other guys doing designs like Paul Rivoche and they would give me feed back or pass on designs all together. Sometimes it would be a little frustrating as I wasn't always clear on what was wanted or ideas would shift quickly. This might be a disadvantage to being off site, but maybe an advantage when losing your temper.

In general I would do many quick sketches like these and fax them over and see what stuck to the wall. These designs are from a show that had a taxidermy lab where these creatures were spliced together, I think they wanted something like an old sort of half warehouse in the old city mixed with a kind of Frankenstein's lab feel. These are done with markers and the tone was applied by putting the paper over a canvas pad for oil painting and then taking a Prisma Color pencil and shading over the canvas which would create a textured tone. This was a way they had been working on Batman, etc. George was always a fun guy to work with and very helpful. 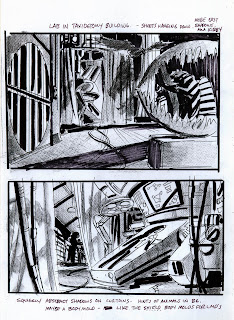 I'm not sure now what ended up getting used or if the whole thing was scraped, I haven't seen the episode in a long time. These sketches are from 99 I think. Sometimes ideas from different designs from different artists would be combined. It was a fun show to work on and now it would be much easier because we have the internet--no running to Staples to buy rolls of fax paper before they close!
Posted by Mike Manley at 8:41 PM