Blast From The Past: Batman 511 Pencils 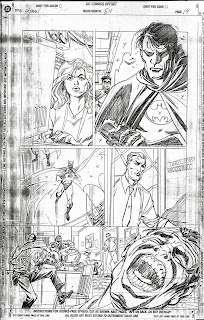 I figured I start 2014 by looking backward to around 1994, twenty years into the couldy past on some pencils from my run on Batman.  More pencils from my archives, this time from Batman 511 which was during the Zero Hour storyline. The last two issue of Batman were the only ones I truly enjoyed drawing besides Batman 500 because they were like old Batman comics. Robin, Batgirl, Joker, etc.  Most of the other issues I didn't enjoy so much for a variety of reasons.  The first was since all the books were tied together it was a reference pain in the keister! You had to get ref from what the other artists were doing, wait to get it and there was little freedom for you as an artist. This was in the day of the fax, long before the internet took over the world. It was more like being a hired gun then, no input as an artist, just draw monkeyboy. I wanted to really do single one or two issue stories like the ones I was a fan of, especially during Aparo's run. But that clearly wasn't going to happen. It lead me to eventually leave the book. 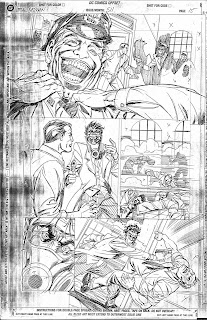 But for a few issues it was fun. I wish I had  more time on these and could have inked them myself, but it was a real race at 3 pages a day at times to keep up with the schedule in those days. 12-13 weeks ahead of shipping! Now things can be late----super late---but back then the "Hot List" was a book 12 weeks from shipping. How things have changed! 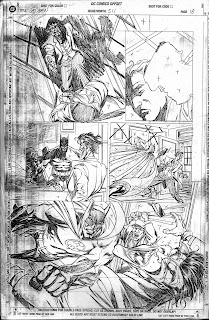 I lobed drawing the Joker the most, and I was definitely tipping the hat to Neal Adams version of the character which was my touch-tone for the character and the whole Batman Mythos as a kid. 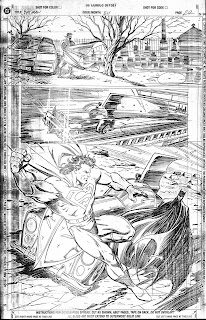 There of course are a lot of things that bother me about the drawing now, but I think that's always the way it is looking back at 20-year-old work.
Posted by Mike Manley at 11:59 AM

There was a Knightfall scene, somewhere near the end with that big stupid armor suit that was amazing. I haven't looked at it in years, but whenever I hear your name it pops into my head. It was one of the last issues and took place inside a subway train. The art and storytelling and colors were just about perfect. The whole thing was burned into my brain and I want to say thank you for that.