The last few days as I move through the piles of books, paintings, supplies and more that I have brought home from school and started to sort out things to keep and toss I have come across some notes on the process of painting from a few teachers and workshops I have taken. This post will touch on my experience and learning about the approach or way of painting, movement if you will, that is called Perceptual Painting.

These notes from Scott Noel's class are not technical per se, not how to mix up a color for flesh tone, mix strings of color in a system or how to paint fur, but are ideas on how to approach painting in a bigger sense, and make moves as a painter that might keep your process fresh from beginning to the end instead of following a specific recipe. It wasn't easy for me to grasp this idea of perceptual painting as much went against my nature at the time as a painter.

Here are some notes from one of my last classes with Scott Noel that I jotted down on my iphone:

"Great paintings are as clear as the stripes on a flag. Paint with big shapes of color and compress the darks and the lights, less of a sharp contrast between them. This makes the shadows richer in color. Paint with a sense of the thing coming into view in color before you can name what it is."--Scott Noel

It took me a long time to get what Scott was talking about in the classes I took with him. I would sometimes get pretty frustrated in trying to interpret what he was saying in his language into a way of thinking I could use in my painting language. My tool kit. Paint the color not the thing. I was very object oriented when I started as a painter. 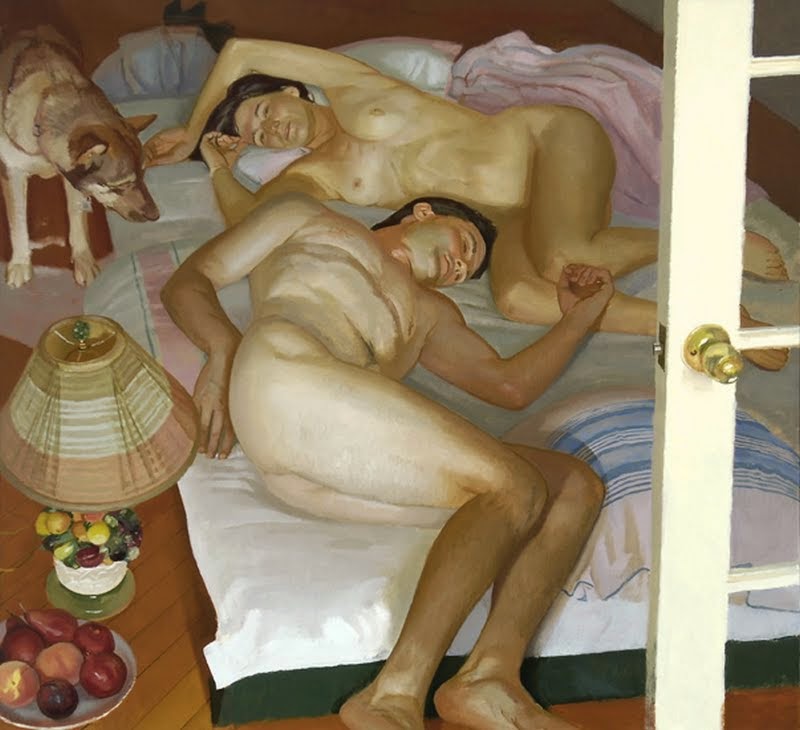 A painting by Scott Noel

I come from a very techie approach to things as an artist, it was the way I learned being self taught until I went back to school and I am still a very techie artist in many ways. Scott would never use the typical or well know technical terms like cast shadow, form shadow, etc., he just never talked like the typical painting teacher or instructor you had in school or would see in an instructional video. Like Dickinson, Scott avoided in class talking about any systems of painting ( though one could say that a non-system is a system if it leads to consistent results, i.e., successful paintings). HA!

Scot's core, spirit and gusto as a painter lived on the razors edge between structure and failure. Paint all day and then scrape it down. If it comes too easy, take it out and redo it. It was a real philosophical approach to painting that does come out of the Edwin Dickinson approach to painting. A way of seeing the world as paint or as Dickinson stated, a work of art as being something that 'moved the spirit through the eye.' Scott built up structures of paint that he then was always willing to tare down to restate. Nothing was precious or was safe from change, and that is a way of working that is very different from some painters who move, step-by-step completing a painting in clear stages or movements. Its dangerous and take huge amounts of energy to work this way. 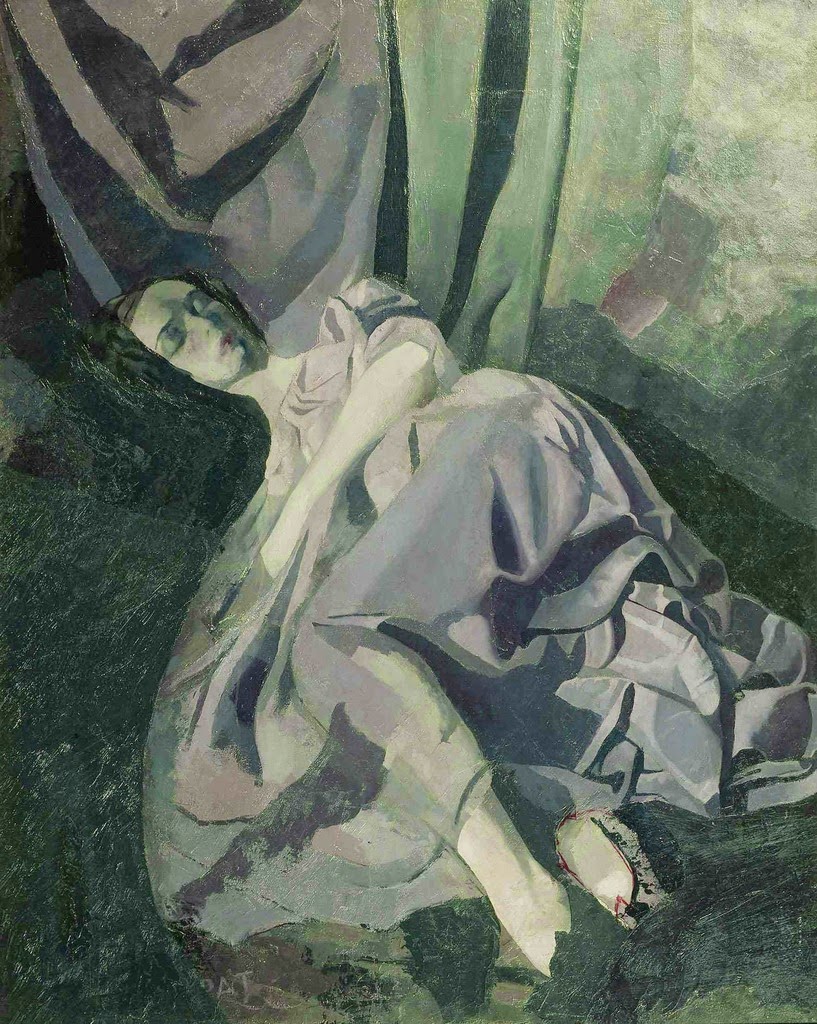 Over the years I had Scott as a teacher I grew enough that I eventually got what Scott was talking about and how it related to his process as a painter and also where we related and differed in our approaches, likes and appetites as painters. We would never agree on some artists such as many of the Russian painters like Fechin or Rockwell, both are fantastic painters and heroes and inspirations to me.


Often in class Scott would look at my work and say that the color needed to be more evocative. I'd look at the painting and feel that I had really matched the colors and get kind of frustrated. "Evocative? What the hell does that mean?" I'd really push back at him with questions as to what did he mean by that, really try and nail him down, and he'd be elusive with a specific technical answer. AARRRG! 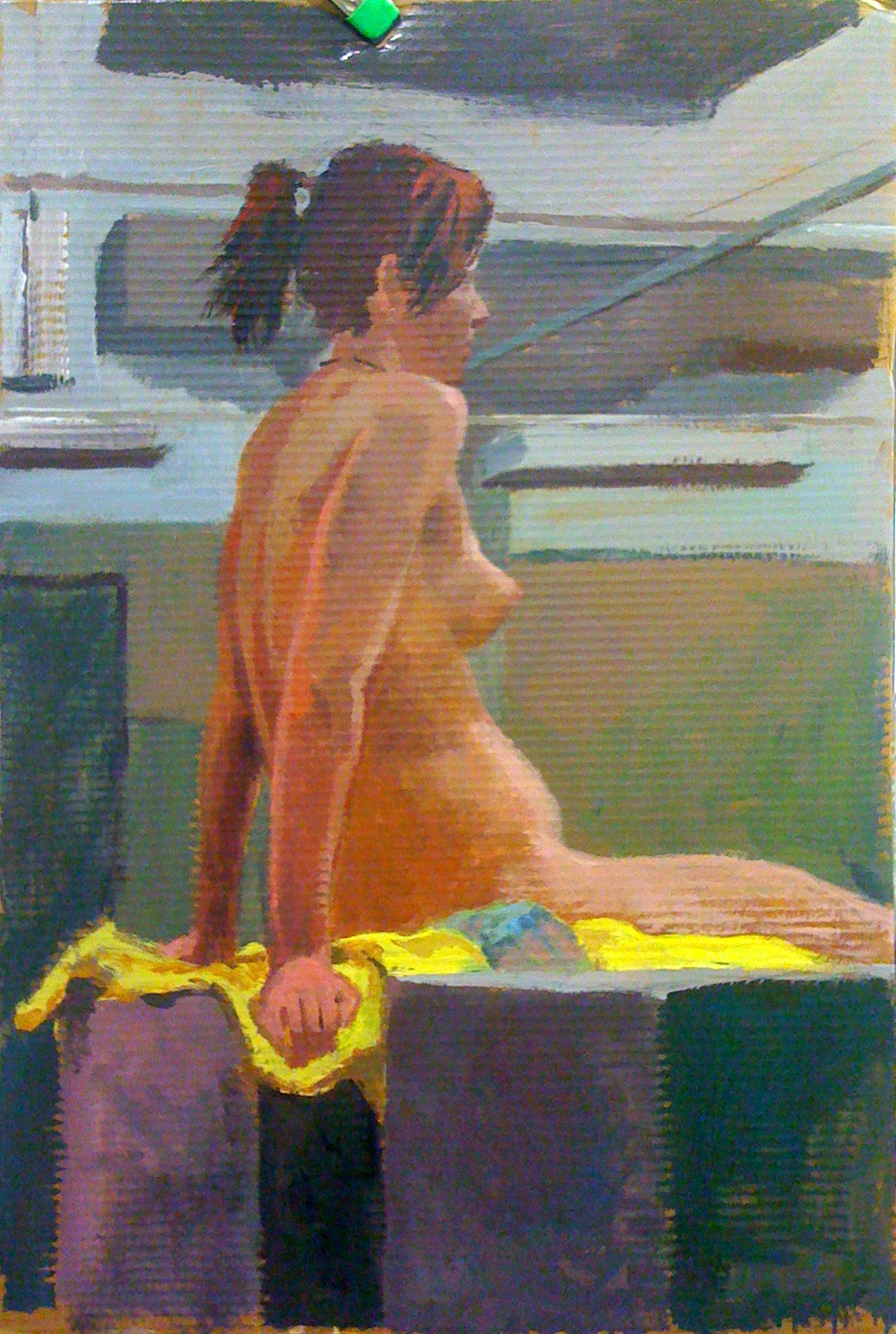 But one day in a Sunday painting session I painted a wall behind the model in what I would call an emotionally keyed color that didn't literally look like what I saw with my eye, but my artists eye and Scott was all Henry Higgins , "Eureka! You've got it!" Now I'm not saying this paintig or the next one are great paintings, but they were breakthroughs in understanding and thinking as a painter for me and getting what Scott had been trying to get me to "see" as a painter. You are not limited by what you see exactly, you have a lot more options as a painter and ways of seeing. 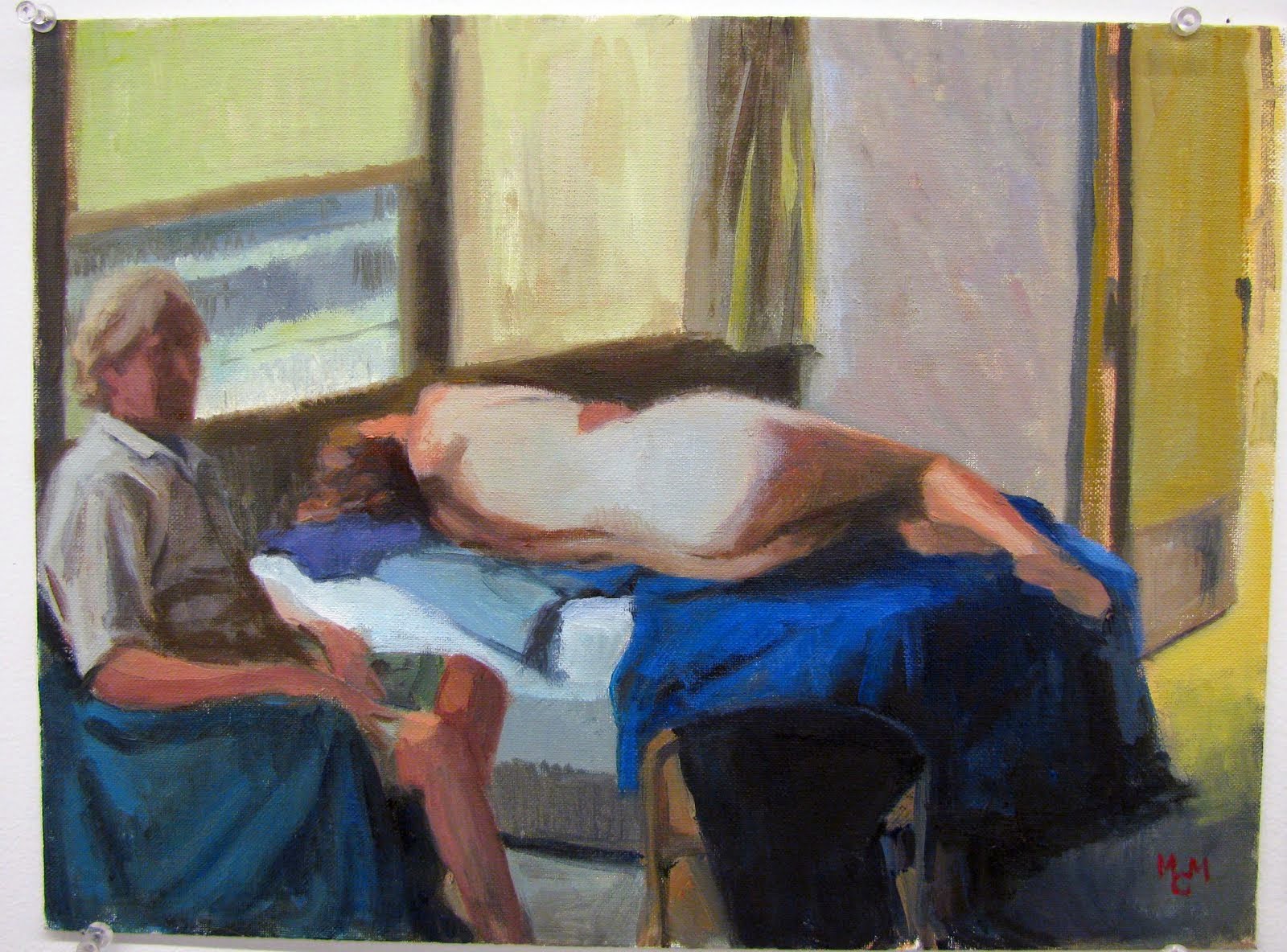 Your perception of a scene as a painter isn't always going to be a literal interpretation of what you see and I did that a lot more early on as a student. You may, can, should, must perceive the envelope of color as emotionally different from what you see before you. That tosses you into another realm of painting, a very personal realm. From there I understood what Scott had been challenging me with for a long time. You see this very distinctly in the work of Sickert, Bonnard and even Sargent or Wyeth. Scott always had books by Degas, Sickert and Bonnard in class as examples. 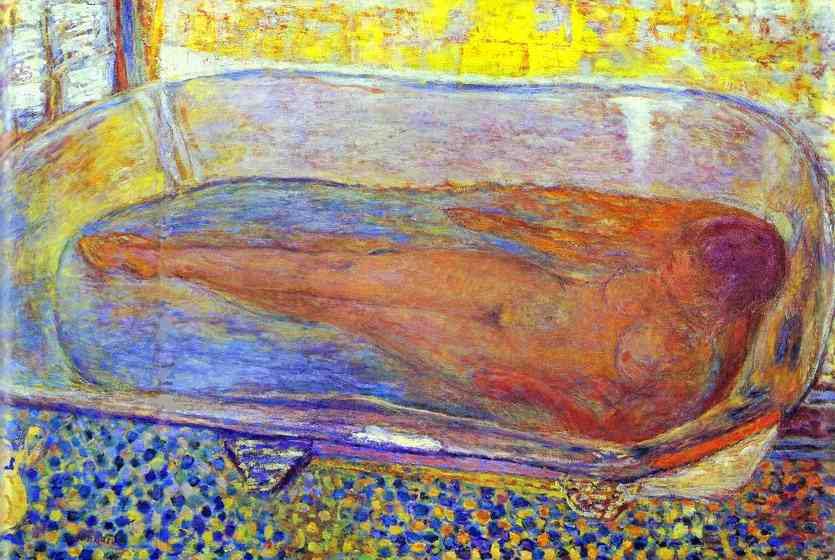 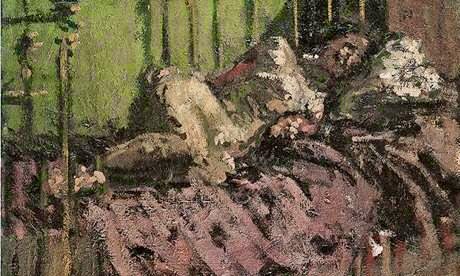 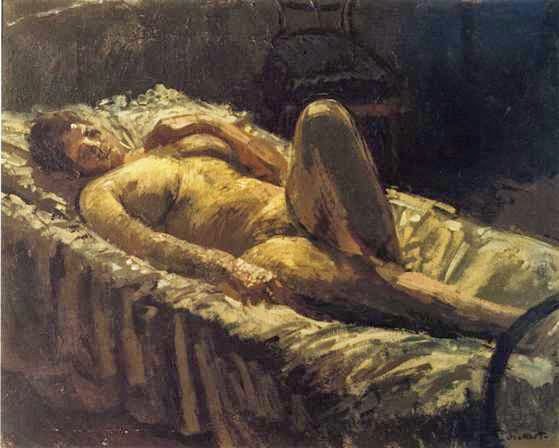 The Iron Bedstead by Walter Sickert


It came down to not always painting what the color really looked like but how the color "felt", and this meant that things were not about matching what I was literally seeing color wise but about what I would call "poetic color". How did I "feel" the color I was seeing and matching with paint how I "felt the color." That would mean by extension how do I see the whole painting in that way, in non-literal- poetic field of colors, stated boldly like stripes on a flag, distinct and clear. Edwin Dickinson is maybe the greatest example of this way of thinking, feeling and seeing as a painter which has come to be called the Perceptual Painting approach. There are a lot of great painters working in this way that you can read more about over on the Perceptual Painters FB page  and the great Painting Perceptions website. The core of this approach to painting runs deep in the pool of Philadelphia painters especially because of PAFA and because of Scott. This way of thinking as a painter is at the core of his approach as one of big guns and chief teacher and leader of the Perceptual Painters movement or approach. 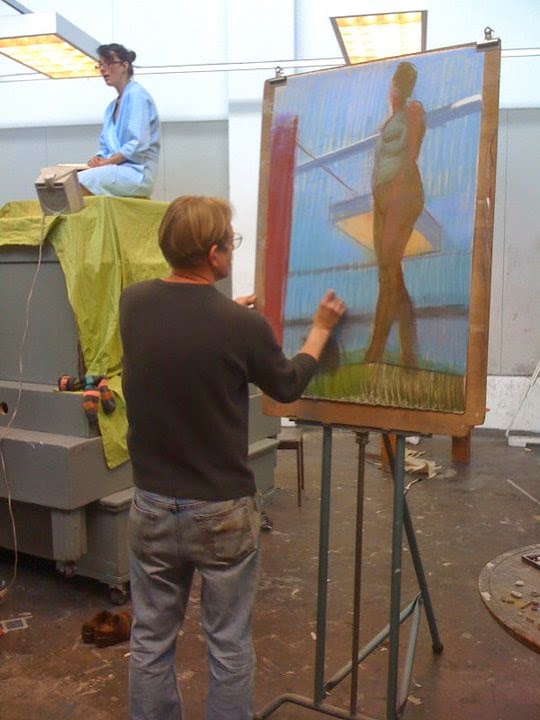 .
Here is a shot I took of Scott working along the students in one of the Sunday sessions and you can see here the model, the room and how Scott is interpreting the scene. Its not a literal mimetic reproduction of what lies before him. I am not trying cast shade or judgement on any one approach being better or more correct in art or painting, but to cast some insights  and ways of thinking as a painter I have learned from studying under the best painting teacher I studied under and certainly one of the best painting teachers today. I don't know if I would call myself a perceptual painter but I do feel a deep kinship and attraction and do employ that way of thinking as a painter.

"compress the shadows and highlights" ahhh, so that is what i need to be doing. perhaps that is also what scott meant by evocative

Thank you for this piece. It was very insightful.