I'm reshaping my painting studio and as I do so I am also organizing and going through the many, many notes I took during school and the few workshops I've taken over the last few years. In rereading notes from different teachers it is interesting to compare notes as it were, compare not only technical things but also reflect on the philosophical differences and similarities. I know that amongst the painters from PAFA , or I should say the figurative painters there are many things in common at the core and maybe the real big difference between the various camps and sub-camps is the use of the camera. Noel doesn't dig it, yet Desiderio, Kanevsky do use it. That aside, I think all of these artists love paint and the sensual qualities it can deliver through the mark of an artist no other form or art can deliver.

In my previous post I talked about how Noel liked to build and destroy, as did Van Dyck. They share that in common as a motif of attack with Kanevsky and Redmond. 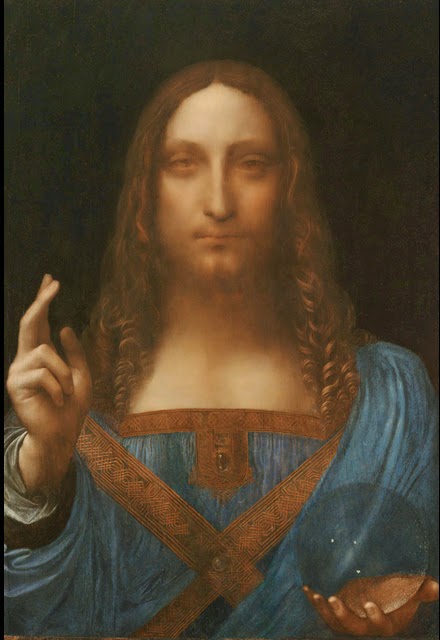 I think the term Open Form is part of all of these artists process, and the bulk of the painters seem to work in this way who come out of the academy. In fact Closed Form painting (where the forms are self contained  and complete, balanced--think David) is rather looked down upon or given a hard time at the academy by many teachers and critics.  Another term for this "blurry" approach as I call it, is sfumato, "to evaporate like smoke", and this approach to painting comes down to us through the language of painting from Leonardo da Vinci. 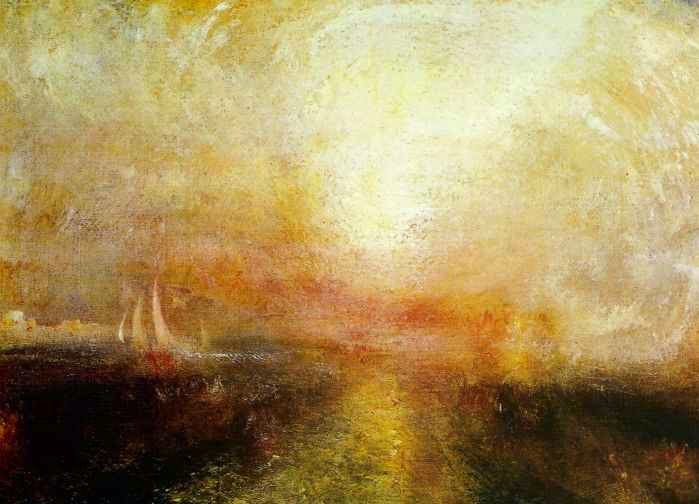 Turner
By keeping the borders of the forms open, blurring the edges or the positive and negative it creates a strong sense of space in a painting. J.M.W Turner's paintings would be a great example of this, and some hail his work as the spark informing the work of later artists and movements like the Impressionists and the Abstract Expressionists.  So with all of this paint language loaded in my mind as a student and a painter its interesting to see where the "streams cross" in painting.  The streams cross a lot more in contemporary painting than one might think. 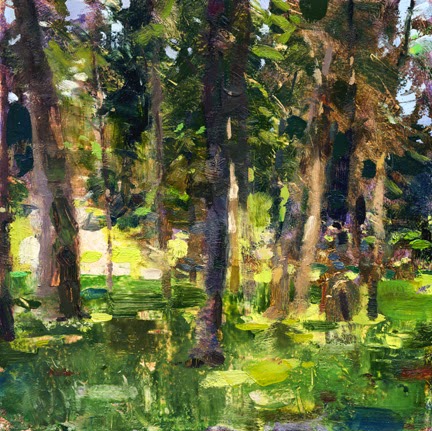 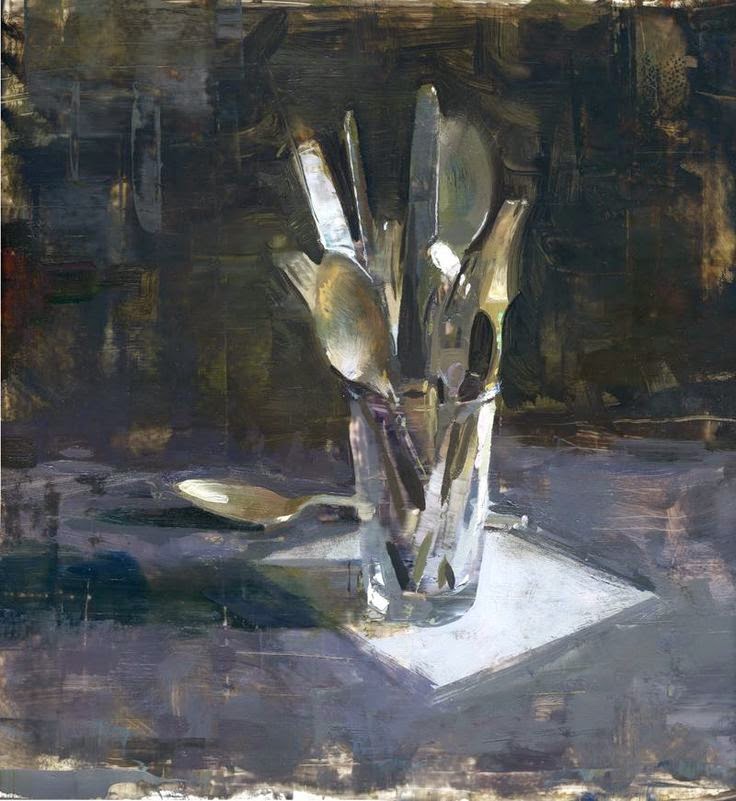 In rereading and organizing the notes I took in the workshop I attended with Jon Redmond I saw a lot of streams crossing with Noel. You can also see more of Redmond's work here. I noticed how similar much of his approach was in many ways to the process and notes I took in classes with Scott Noel. Redmond is also good friends with Alex Kanevsky and I did take a class with Kanvesky at PAFA, but I got a lot from Redmond's workshop on how I feel they both approach painting  as I think there is a very similar process at work in both of their paintings; specifically not letting the drawing control the painting, and working in and out of the positive and negative. Even in Scott's classes he would jump on me to stop drawing and start painting. 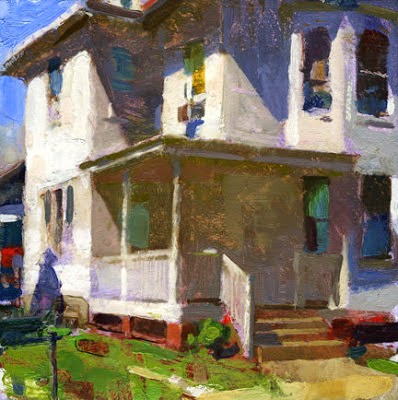 Redmond
Here are some notes that I took down during a workshop with John Redmond last year as he did a demo over two days. Redmond was painting on mylar and used a little liquin and no terps after starting the painting. 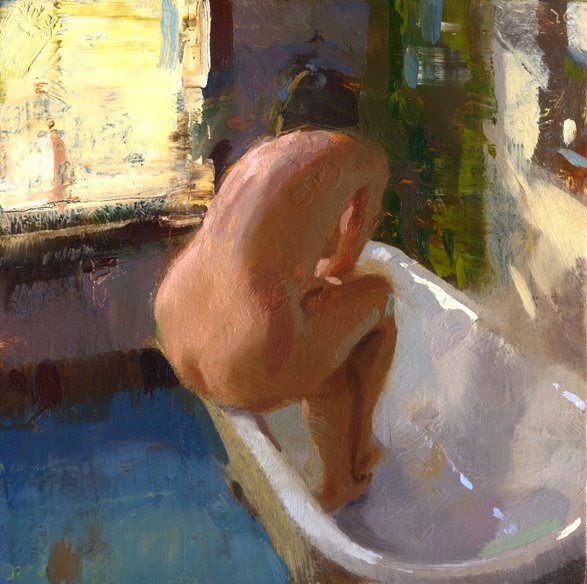 The larger the color shape in the painting is, the more important it is. In the start of the painting push the color in your painting where you want it to go but nothing too specific. You are either painting light or painting shadow, let the layers peak through and paint in different directions. Try and capture the sensation of a color and paint the impression of deep space. Remember that the opacity of a shadow is different than that of light.  Use the "non-thing" to describe "the thing".

By shifting the emphasis between the positive and negative back and forth it creates a better balance in the painting. Don't let the drawing control the painting. Build by masses of color, but no drawing.

Let the outside control the inside, negative space to control positive space. Work by matching the relationships of value and let the "identity" of the object take care of itself as you build through masses, let the edges work themselves out--painting is not about creating symbols, edges happen as a result of what you see.

Paint what your eyes are telling you--light is the vehicle. We are trying to get paint to mimic the way light works. Build through value, not through color. Build through warm vs cool and be willing to destroy what you have done and repaint it. Let something complex be suggested through something simplistic.

At the end fluctuate the edges, by making the highlights thicker it adds extra value as it sticks up off the surface to catch the light. You can also glaze or velatora to modify the painting with transparencies at the end.

Lay your colors out the same every time and compare your colors on the palette directly to the colors you see.

Now there are many many painters who work Open Form, and in the contemporary world it is probably the most common approach or "way" to paint. Zhaoming Wu, one of  my favortite painters works this way in both paint and charcoal as do Jeremy Mann, Carolynn Anderson as examples. 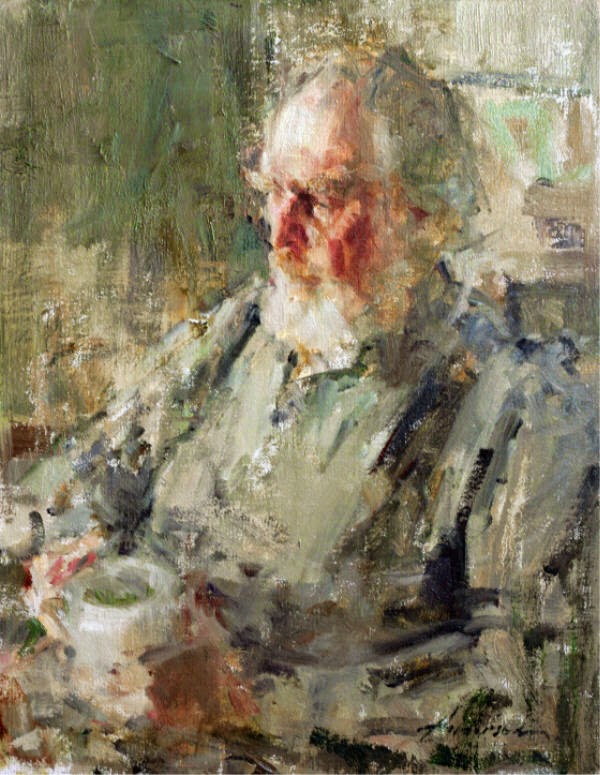 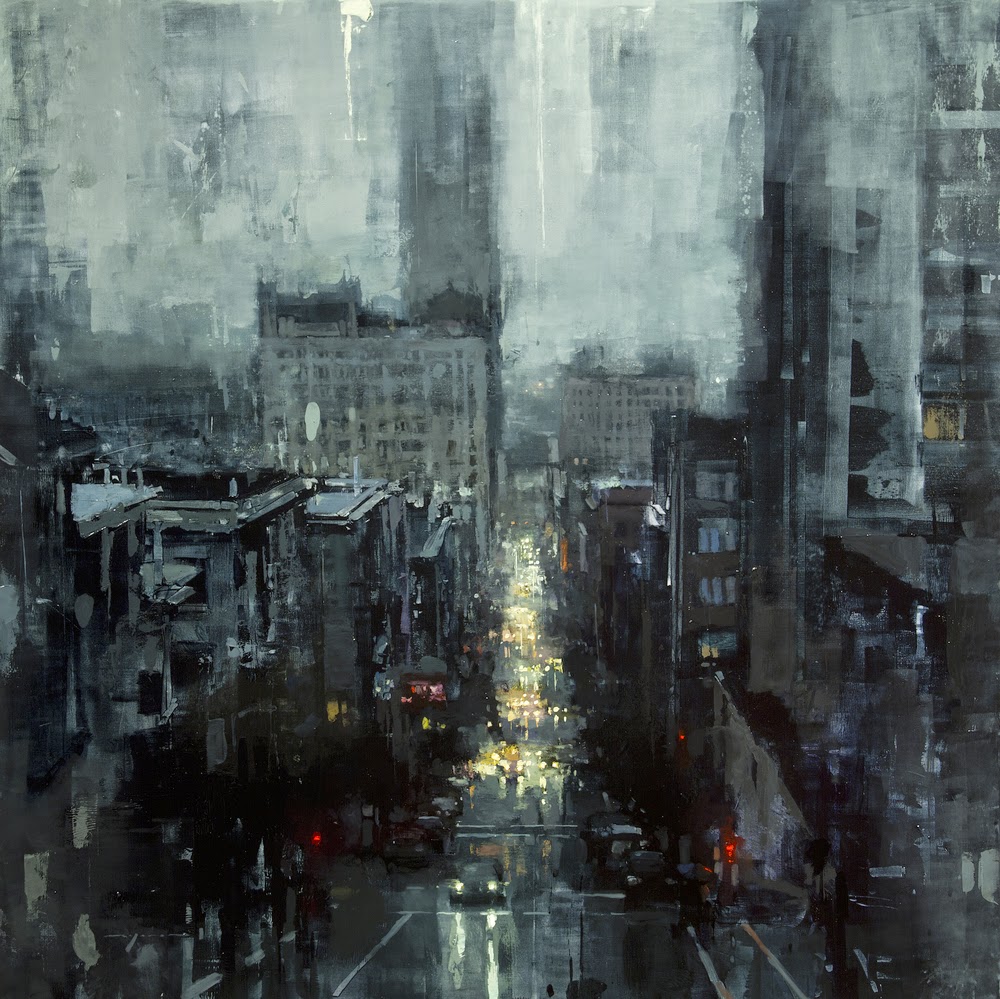 When I work from the figure that was even more important to me, especially in the beginning. In school it took me making a lot of messed up paintings to finally be able to let the drawing go and get it back, to loose it and find it. You have to be willing to trust yourself to get the drawing back in. Noel always said I drew good enough to save anything I messed up--oh yeah--sure--it's so easy!

Redmond said he even messed up something on purpose at times to have something to save in the painting. An interesting strategy for sure, but only for the brave painter. I suppose this is akin to Noel painting and then scraping it down at the end of the day.

In the end there is no right or wrong way, just what works for you, what feels correct or right to you. Of course in school you have one teacher or critic saying YES to the very thing the next painter or critic says NO to. Its up to you to paint how you feel, not how anyone else does, even if your respect them or that process is the favored way to work in a system like a school.

What I took from the painters I studied from are approaches or motifs to work from or with, ideas to think about as I paint, and this is a very intellectual way to approach painting that above all involves risk for all of the painters I mention in this post. It is vital, big part of their process.

To me there is a lot of commonality to the paint language or paint thinking of Noel, Kanevsky, Redmond, Van Dyck going back to root artists like Edwin Dickinson. They probably would take issue with me saying this  as sometimes painters can feel they have cut out a very different ground than someone else. I think its good to celebrate and study the similarities of artists you like more than the differences as I think this helps you discover yourself and the common thread of your likes, loves and motivations as a painter.

Really interesting, I am getting so much out of these posts and thank you for taking the trouble. Hanging on your every word!

Hey Mike,
Thanks for these great insights to painting. I struggle a lot in painting and I am sure this post will help me a lot.
Cheers,
Josef

Nice post Mike. I was at the Redmond workshop and briefly met you there. Thanks for posting your notes, they are extremely interesting, and I am remembering much more now through them. I thought the Redmond workshop was incredible, and saw his latest show at Sommervile.. Saw that you were at the Camp Hill event recently, i live up there these days, perhaps I will cross paths with you next year.