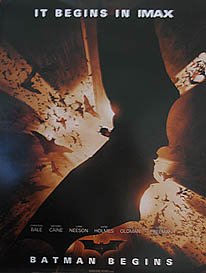 I saw the film last nite at an IMAX sneak preview thanks to Scott Neely who scored free tickets from his magazine gig. There were guys dressed up as newsboys passing out fake newspapers. 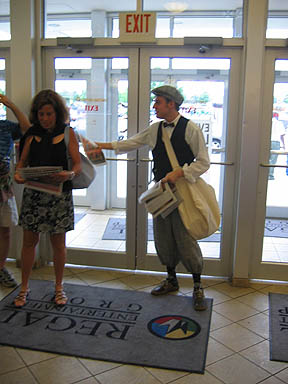 Is it a good film? Yes. Is it a melt your teeth film good..no. 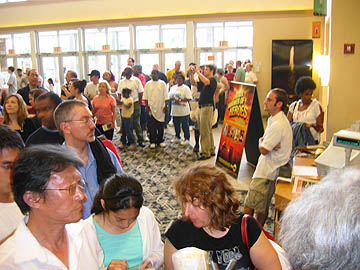 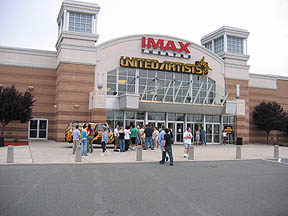 Certainly Nolan has made the best Batman film done to date, but upon reflection I think the Katie Holms part could have been better. I hate it when smart characters are suddenly dumb later in the film because they need to be in danger or get hurt so the hero can do his thing.

I think without spoiling anything the beginning of the film showing Bruce's training is better than the rest of the film for me. The play between Neelson and Bale is solid here, it feels 'human". Once the Cowl is donned a bit of that is lost I think, maybe because it's hard to act in all that batsuit. Though there are cool "angry batman shots" the deal with hanging baddies upside down by the foot is soooo overdone.

You never get a super clear shot of Bats and maybe that is for the good as it still makes him a bit mysterious. The beginning of the film feels big, the rest of the films feels smaller and a bit set laden. The use of CGI was OK...but how many trucking city shots can one take? Nice effects on the hallucinations scenes and some other visual POV scenes with Bruce in Asia, yet I didn't feel Gotham had a real distinct look. It felt more like Metropolis. Gone are the overdone sets of Anton Furst and the soundtrack by James Newton Howard and Hans Zimmer is very different, more tribal "Pirates of the carribiean" setting the tone far far away from Danny Elfman musicbox land . But once again I have to disagree with a lot of the muddled poorly staged action scenes, here Nolan fails for me as a clear visual storyteller, I get frustrated, I want to see Batman fight but again and again the set-up, the shots are too close, too much of a jumble, quick-cut mush. Why can't directors fucking set this stuff up well? It's so annoying.

Bale is good as bats/Bruce, and Oldman as Gordon, and Kane as Alfred. Cillian Murphy is ok, yet not quirky enough to me but Neelson is solid, even Rutger does a solid job...so it's well acted overall, but I was a bit disappointed in the villain the Scare Crow. He just wasn't scary...it was more like the Mask.

The Bat tank is cool and there are plenty of good images and nice nightmarish moments but like most movies, the 2nd act is the weakest, some stuff just doesn't make sense and seems to be staged so a person can be where a person needs to be plot wise, always the sign of bad writing, it feels contrived and forced and I feel the end is a bit predictable and sort of a letdown in a way, but I went expecting CRAP, total fucking Bat guano and left wanting more. It's not the Batman film I'd make but still far from the gay-house ass-chamber of the last Bat Fiasco...So I give Batman Begins 3.5 out of 5.
Posted by Mike Manley at 1:50 PM

"Is it a melt your teeth film good..no."

i think you're just nitpicking. hanging peeps upside down, with bale acting like a mean mother fucker, looking like the devil is something we've wanted for a long time. this was almost akin to a horror flick the way they treated batman in this film. keaton was never this vicious.

you've left out all of the wonderful interplay between the characters (wayne and fox, batmans first meeting wth gordon, to name 2 out of the numerous ones), and the journey that bruce goes through from child to young adult.

there are so many positives in this movie that CLEARLY outweigh the small negatives, i don't see how you could say it wasn't "melt your teeth good".

no movie is perfect, but all one need do is recall the last 3 flicks to see how badly batman was portrayed (i think batman returns wasn't so hot compared to the first)

the ending, while predictable, felt fresh at the same time, because you know there will be a sequel, so what's the harm in a little foreshadowing? maybe it would have been nice to let the flick end restin gon it's own laurels, but it's so small a complaint, it's almost not worth it to file it.

and it's Neeson! and their interplay is great too!


No you're off your rocker and out of your gord. the whole scene with him driving her to the batcave so he could give her the anti-dote was so we could see the tank in action. CRAP! poor screenwriting!

If instead he brought the vial with him, like a hero would and then had it broken because too many whackos were attacking him, THEN IT WOULD MAKE SENSE TO DRIVE BACK TO THE CAVE. He could have given her a transfusion of his blood etc. So even though he saved her life, it's even more bitter sweet later when they part. It would add even more drama! And enhance the fact he's human, and starting out. You know, beginning his career. This was a really poorly thought out part of teh screenplay, I smell executive decision on that.

And how can something be both predictable and fresh? That makes no sense.

Glad you liked it, I enjoyed it too, just not as much as you and can't cut these guys slack when they have millions to play with. lame end is lame ending, sorry, and that fight was one of the worst staged fights I can recall lately. You can't tell a fucking thing that's going on.


Yeah, i couldn't figure out why he didn't bring the vials with him either, but the story was that he was waiting for it, and he was hoping it would be there when he got back.

a transfusion doesn't really work because he would have had to spend tim e finding out her blood type to see if it matched with his, then stripped down to get to a vein, and where's the rush and drama in a scene where he has all the time in the world to do that?
so yeah, he didn't bring the vials with him, but it's a small price to pay when we get the chase scene we got. there was so much cool character development, i'm ok sacrificing a little "logic goes out the window" for a sec.

"It would add even more drama! And would enhance the fact that he's human, and starting out"

um...did we watch the same movie? the WHOLE movie enhanced that point.
-his loss of his parents
-his fear of the bat
-his desire to kill chill
-visiting falcone and getting the whole "you'll never understand" speech which prompts...
-his decision to hop on the boat after she slaps him twice and leaves his life behind
-his WHOLE journey from jail to ra's
-acquiring the suit and weapons.
-teaming with gordon
-learning to act like the playboy to mask batman

goddamn i could go on kid!

what do you find so lame about the end? it wasn't so bad. what would you have put in place KNOWING you'd have to deal with hollywood exec's?

it felt fresh because you knew that it would be a fresh take on it. that gordon giving him that card meant we'd get a whole different joker than the burton one. establishing how this batman acted compared to the other 3 was fresh. keaton batman and bale batman are night and day, and that will show in the next movie. different team, different take. are you really saying new creators can't have a fresh take on a character? especially after we JUST got one?

not sure why you can't cut slack and still look at the overall picture. this was a great film. the fight scenes were crowded, made worse sitting as close as i did, but this movie had a lot more going for it than not. and maybe they'll have learned their lessons for the next one. Spider-Man 2 was better than the first!

man, and all this before coffee!

ha! we must be french! we BOTH wrote SPOLIER instead of SPOILER!

Just have to say that I liked the film but had many of the same problems you had with it, Mike. The "vial back at the Batcave thing" drove me nuts, and I thought it was really, really bad casting with Cillian Murphy as the Scarecrow. Too much male model with the bee-stung lips for me to buy him as a leading (and criminally-obsessed) psychiatrist.

But all in all, I did like the movie better than I thought I would.

Yeah it should have been Lance Henriksen! Somebody scary!

I really enjoyed your content on Batmanand will be back very frequently! I actually have my own Batman Exposed blog with all kinds of stuff in it. You�re welcome to com by.

Hey, I have enjoyed...your blog is informative - even entertaining.

I have a halloween sites. They pretty much covers costumes and masks related stuff.

Thanks again and I'll be sure to bookmark you.

Hey, you have a great blog here! I'm definitely going to bookmark you!

Come and check it out if you get time :-)