I mentioned in my last post that I am getting back in the saddle of self-publishing again, though in a real sense I have not left since Draw! Magazine is essentially the same thing in many ways. One of the projects I want to get out there is Trax Rover,the story of a space canine-cop, a comic story that has laid unfininished in my flat file for over 20 years. I was 23 when I drew this story. 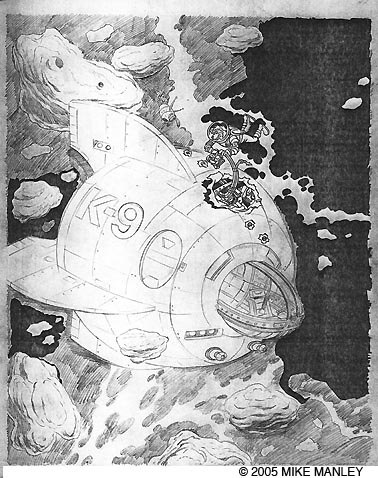 I stared drawing this story in the bowels of depression after attending the 1983 Chicago con and getting shotdown by all the big companies with my portflio of samples. I was really bummed and this comics was a way of licking my wounds in a way. I had taken some Batman/Demon samples around that year and nobody was bitting, I got the typical con response, "You're almost there, not quite yet, work on your anatomy, work on your storytelling , yadda, yadda". I got reviews from Jim Shooter, some guys at DC I forget, Howard Chaykin etc.

After driving back to Ann Arbor a bit angry and then a bit depressed and returning to my job at the Hudsons's resturant ( I had quit my lasy art gig, swearing the next art job I held would be comics or bust) one day I drew a few sketches of this character Trax who was based on my dog Sabastian, a Sheppard/Collie mix. I was way into animation then, as I am now and even toyed with trying to move to LA and try and get a staff job at Hanna-Barbera. Being in Michigan made that seem like a long shot and a very expensive undertaking. I had learned that Hanna-barbera was still hiring young guys and gals to train to work on the slew of crappy Saturday Morning cartoons they shit out in the 80's. So I got the phone number from information and called there early in 1983 but was discouraged by some old guy on the phone, saying they had stopped the trainee program. I didn't know how I'd have gotten to LA anyway, but I was studying animation a lot having bought my own VCR, Chuck jones and early Disney being faves. This was in the dark days before Little Mermaid lit the fires again at the box office. I liked doing animated or cartoonie art as much as I liked realistic art. I think the frustration I felt at being rejected for my realistic work manifested in me doing this story off the top of my head. I was going through a lot of changes then both personally and artistically. I started and stopped many different ideas that would peter out after a few pages, but Trax seemed to write himself and it's clear I cross polinated a lot of things I liked from Forbidden Planet, Wally Wood, that round Chuck Jones style, ( early road Runners)lady and the Tramp and my love of my dog Sabastion. It was the first time I really drew a whole comic just for myself for no other reason than I just wanted to do it. No trying to please anyone else but me. 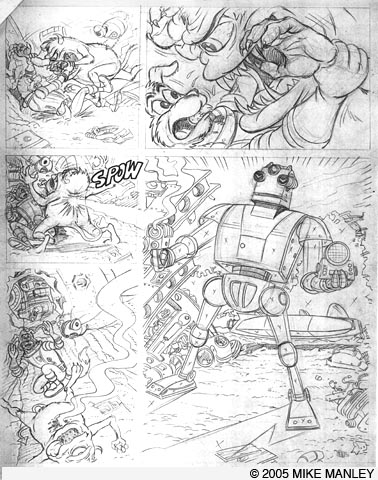 All my friends I showed this too liked it a lot. That fall I met Bret Blevins when he moved out to NYC with his wife to start working at Marvel and through Bret started sending in more Marvel samples but the next summer at the 1984 Chicago con I showed Trax around and ended up getting a job assisting Judy Hunt on Robotech Defenders for DC comics and have been working in comics pretty steady since then. 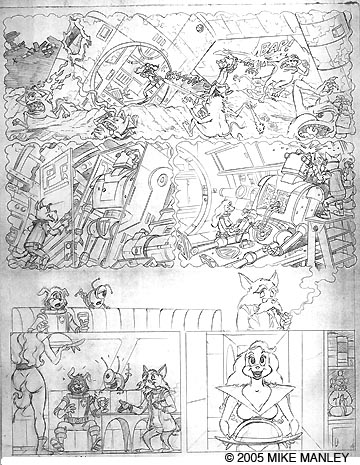 From that summer when I moved to the Philly area to work on the Robotech book (where I have been ever since except for one year in northern PA sharing Al Williamson's studio) Trax has laid in my flat file, I'd dust him off every few years or so, wince at some of the bad drawing and admire some things I did too. I almost went with Trax before I did Monsterman for Action Planet when I started self publishing in 1995, but decide it wasn't what I wanted to lead off with. For some reason it feels like this is the time to dust Trax off and his robotic side-kick F.L.E.A. and finish the project. I'll have to do a bit of redrawing, re-jiggering as the paper/format isn't to comic specs and the paper is so-so for inking. I'd love to do this in color but I think this will be a real vanity thing, maybe only a few hundred copies and sold direct at shows and from my website as I can't see getting very big orders through Diamond and that 60% bite they take as distributos is too steep for a project like this. So enjoy an early preview of Trax Rover!
Posted by Mike Manley at 2:17 AM

I can't wait! It looks like a lot of fun...so cool that you're doing what you WANT to do.

Hey Mike, I know this doesn't have anything to do with your post but I need to ask you something. You know how I met you at the Taylors' X-mas party. I'm curious to know how you met them. My aunt has known them for several years, and once Mrs. Taylor accompanied me in a violin recital several years ago when the original accompanist was in a car accident. I've been meaning to ask you this for awhile but my last few posts in your blog were very long so I thought I'd ask you now. Since you were at their paarty, I'm assuming you've known them for quite awhile. Or did you just show up at that party uninvited so because you wanted free food?

SPJ I know the Taylors thru my brother Dave who's a musician and played with Vania their daughter for a while.

Mike-
I'll buy 2 copies! Glad to hear you are going to publish again. I miss Monsterman and the rest of the characters in those books. What about G.I.R.L.Patrol? I'll see ya next week at the con. Watch out for the Baby Men!

i love that first drawing with the spaceship. wicked awesome radical.

Dan, I want to publish a GP oneshot this fall, or winter after Trax is done, then I'll do a Monsterman book as well, maybe a trade.

Yeah careful of the Babymen, the con is full of them!