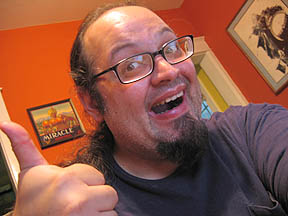 I got a new pair of glasses and sun glasses today. I've needed a pair of new glasses for a while as my regular glasses broke a while back forcing me to wear an very old pair which were pretty dam beat. So I went to Lenscrafters® and got my new set of eyes this afternoon and while I waited I hit the local Borders books for a coffee and browsing. I also did a bunch of thinking and ruminating, ploting and planning about the future, or my future projects. I think I will return to self-publishing in a limited way under my Action Planet imprint. There are a few shows like Baltimore comic-con and the SPXthat I plan to attend this fall and I think I'd like to have some new comics ready for then, one a comic I initially drew over 20 years ago and will now script and ink it up. I'll post some previews soon. I may do a short anthology comic which contians several short stories. I'd like to do more comics but find the bulk of material the majors pump out to just not be interesting to me, so been there done that.
Posted by Mike Manley at 9:11 PM

You look smart now, Mike! I can't wait to break them.

Congrats on returning back to self-publishing. I can't wait to see the results.

I went and saw an eye doctor for the first time in 12 years last week. I have a slight stigmatism, but don't need glasses.

My eye doctor told me I had brain damage from a concussion years ago because when he put the flashlight in my eye, my pupils remained huge and didn't react to the light.

So... someone finally told me, and it had to come from an eye doctor.

I coulda swore those old glasses were the sames ones you used to tape together back in '78...