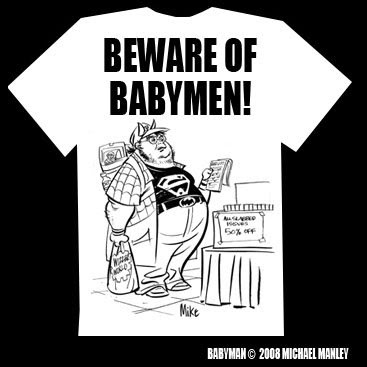 It seems my little term I coined babyman is getting more popular. Some really hate the word, but I think most understand it, they "get it". Will it enter the public lexicon like Three-Peat! Will I be eating dinner one night and see Larry King say "Babyman!"? Chris Matthews? George Will?

I made it very plain, very clear why I was using the term, one I actually coined a few years back, and you can go back and read my original posts on it. It's clear from skimming the message boards I think some just don't get what I wrote, or maybe, don't want to get it, because it strikes at their gelatin core. If you don't like the TV show I work on, ok, or book I draw,fine. I'm sure the kids who the show is designed to appeal too will probably like it, who will be buying the toys and such, and the advertisers will be happy if the ratings are good. I am not that thin skinned that I am personally hurt by a Babyman, that's impossible, but sometimes babies need to be disciplined :-)

The Babymen are what's wrong with comics as a business. The Babymen have taken over. That doesn't mean that all comics must be for 4-year-olds either. babies like to misquote things in excess too. I like and enjoy adult comics, mostly European albums by guys like Moebius, Bernet, Herge, etc. But I like the Gorlon Parlove super-chunky violent Punisher art. But it fits the Punisher.

Tits and curse words don't make something adult or mature. There are plenty of curse words on every junior high playground mouthed by 8-year-olds, who use the words but lack the maturity to really know the meaning behind the words, they just like the impact of saying them, it seems like a cool adult thing to do, cause' that's the way many adults speak.

However the idea of having Mary Marvel be a big-boobed badgirl, as an example, seems so Babyman. And hey, I like Cheesecake too. I just think what the Omega-Class Babyman never gets, is that Batman isn't for him only. Warner Brothers needs Batman to be for Adults in Dark Knight, but also for kids on the TV shows and toys which they make most of the money off of, not comics. Batman, or any commercial character isn't his toy alone.

But babies don't like to share, babies don't want to change and resist it. That has pretty-much ruined the business along with having only one distributor, essentially almost all the new fans reading manga, not Spidey, so the fans left are mostly, though not all, Babymen. I say 60%+ of fans are Babymen. Don't believe me, open yer eyes at the next con, especially one where there are very few girls, and no manga. There, you will see them, sloth-like, shambling about, geek-lists and coolers.

Hey, I can watch and enjoy the old Adam West show, the Animated cartoons and the Dark Knight and enjoy them all, as does most of the TV and movie watching world. They get it--They don't have a problem with it, only the Babyman needs to justify that Batman is real, for adults, needs to 'fuck people up", be darker and grittier than the bottom babyman's slick white socks. And like a, baby push away anything except the one or two fetish things he likes.

I'll be attending the Baltimore con look me up and maybe I'll be selling T-shirts.

being a former comic book store worker. I can confirm your estimation of 60% babyman.

There is very little in the geek field that I dislike... why? because I see it for what it is, a fun form of entertainment. Not something to focus my life and entire existence on!

Right On Mike! Holy nail on the head.I agree with you 100%. My Wife, teenage Son & Daughter and I have fun at SDCC now spotting the "Babymen" from our table every year! It's a blast. They get so upset when you tell them you LIKE seeing darth vader as a giant M&M or Mr. Potato Head toy(Darth Tater!) I've been using your term ever since you first coined it. Keep going. I love reading your blog and I miss seeing you at San Diego Comic-con. Will you ever return? (Please. You could sit at the tomorrows booth and draw Monster Man & G.I.R.L. Patrol pin-ups.

Mike,
I want one of these T-Shirts! You need to put it on your E-Store (do you have one?).
Have you watched Robert Kirkman's video blog about saving comics?
-JG

No, no ,no, just BABYMAN alone. I want to be one when I wear it and laugh when I see the real thing wearing one. Less is more Mike! Your long title sounds like a Kirby comic parody, that's something else. You're clouding the brilliant purity of the concept with two ideas.