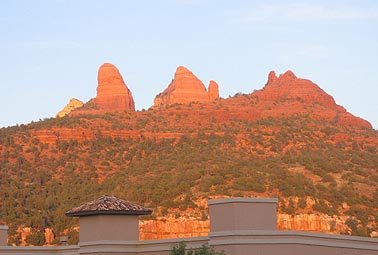 A picture of the beautiful red rocks of Sedona 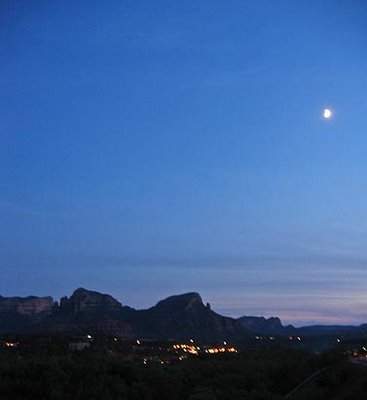 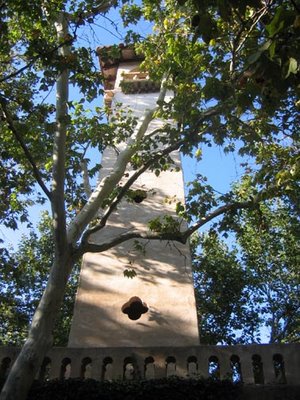 Another of the zillion cool pics both Echo and I took in Sedona.

Our vacation is drawing to an end in Arizona, and what a great time both Echo and I have been having. In fact it was so good we got engaged while we are here. We bought a pair of silver rings with Hoppi indan designs on them just for the occasion. I'll have a bunch more phots and a report on the hoenix con from last weekend later, maybe even after I get back to Philly.
Posted by Mike Manley at 3:06 PM 6 comments: 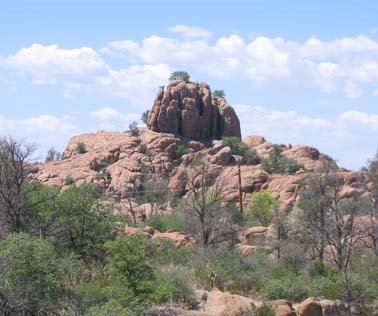 I'll be attending the Phoenix Cactus Con this weekend in Mesa along with many top comic pros like my buddy Bret Blevins. If you are in the area stop on by. I love Arizona, I've been there many times, I even almost moved there once. I may still.

After the con I'll be up in the Prescott area, stopping by Sedona to see the great sights and enjoying the awesome weather. I'll try and update from my little trip...

I am excited to be going with Echo who's never been to the west before...but she's been to Tibet. I can't wait to gorge on the great Mexican Food.
Posted by Mike Manley at 2:43 AM 1 comment:

Here are two sketches I did at Starbucks last night while Echo, our pal Ryan and I had some energy coffee drinks. I think the heavy guy became aware that I was sketching him and actually held still for a while. He never came over to see the drawing though. Done with a Generals Drawing Pencil.

Here are two more penciled pages from the Turtles issue I am working on. 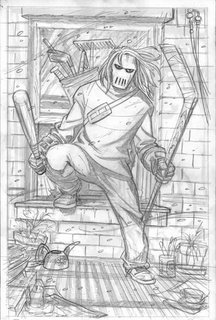 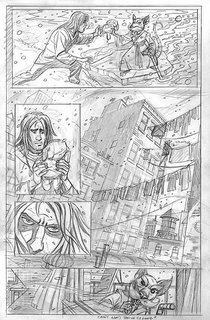 Here are this weeks figure drawings from DCAD. I ran the lab this week so we had some very good lighting again. These are all either 2 minute, 10 or 20 minute poses.

Me sitting in our booth

I'm back home in the studio already working way, unloaded the jeep and ready to get back to my regular schedule for a few weeks until I do the Pheonix Cactuscon.


The man we have to thank for such a good show just like last year's is Marc Nathan who once again hosted a great show, in fact I think I did even better business this year than last. This show is what all shows should strive to be in hospitality and spirit, Heroes Con is the only other show like it. It's a show about comics, celebrating comics, not celebrating everything else media wise...and then comics. The only real hassel is the rooming at the hotels, I wish I could have stayed closer but our room an the Hiton Homewood Suites near the BWI was only 15 minutes by car and was a nice hotel with plenty of room and a comfortable bed.

Baltimore has great eats in the Inner Harbor. Saturday we ate at Edo, the new japanese resturant (Pics soon) on the recommendation of Marc and he was right-it was delicious! We ate like vikings, ordering a dozen smoothies and all kinds of sushi, pot stickers etc. I have learned from eating a lot of japanes food that i have to eat a lot or I am hungry again in a hour or so. Marc is also a good egg for providing not only a free booth but providing a nice lunch everyday. Again this should be normal, not something so out of the ordinary. Wizards shows may be pretty organized, but I tell you, as an artist I feel like I get NO LOVE for mt table costs.

Sunday was a fairly slow day but both Echo and I did several sketches and I think for some making it a really good one-day show, Saturday only could be an option. I did great saturday selling a fair amount of art and Draw! issues.

I did a sketch of DOLPHIN

There were a lot of artists at this show and everyone seemed happy, laid back and having a good time talking and hanging out. For many it would be the last show till next year.

Matt Wagner looking a lot like Mike Mignola....
It was agood place for me to do business and schmooze with artists to get them to agree to do some articles in Draw!. Right now it looks like Chaykin, Cho, Schultz, Kitson, Powell and Linsner will be coming up in the next year.

I didn't see as many costumes this year, only a few Saturday and I was told there were two guys dressed up as Black canary and Wonder Woman...glad I missed that!

There seeme dto be plenty of spin with marvel and DC on their Civil war and 52, I don't get into that stuff at all nor the Harvey Awards which have moved to this show. I did the Harvies a few years back and that was enough, I also disagree with how they allow guys who only ink their own work to be nominated in the Inker catagory. That is just idiotic. Because of that I never vote as a result nor support them in any way.

The Image booth with Larsen and Kurtz

Baltimore is a show for real marvel and DC fans primarily, but I think Top Shelf and As House looked like they had good traffic as well, in fact I think it seemed like everyone did pretty well.

It seems for a second he did indeed consider giving up his life of crime...

This is my favorite show to do, it's easy to get too, the fans and Marc are great and well it's so relaxing and fun to see so many good friends. If I take the barometer of the industry from this show as opposed to a Wizard showa or Sandy Egoes I think the we are doing good as an industry. Not flying too high, but not as low as a few years ago. Not that much of a manga pesence here, but I think that maybe that isn't so bad. If more cons could be like this I think it would go a long way toward regrowing the hobby, especially if comics continue to be so in the public eye. I just hope that newbies to the hobby can find the good shops and fall in love with the hobby like I did 30 years ago.
Posted by Mike Manley at 1:35 PM 2 comments: