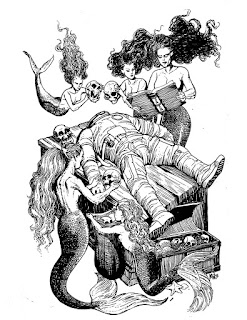 In the evenings after toiling a long day at the drawing board on the comic strips I will ease up or wind down sometimes by--more drawing. I know, for some relaxing might be taking a long walk (which I also do) but I find doing these "Wind Down" drawings like un-clenching a fist, letting my imagination run free unshackled by any continuity demands. I never know what I will draw as I doodle away, sometimes I keep what I put down, sometimes I don't. If I like it, I ink it up. I post these on my Facebook and Instagram and people really seem to love them. I do to and plan on publishing a book of these drawing in 2017. I love the great pen and ink artists of the past century, Booth, Gibson, Joseph Clement Coll, Kley and Stoops to name just a few.

Why Mermaids and Astronauts? Why not! 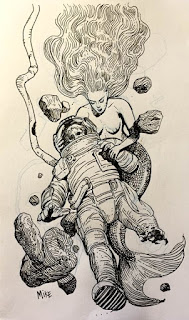 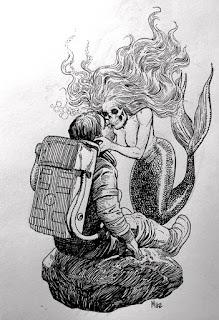 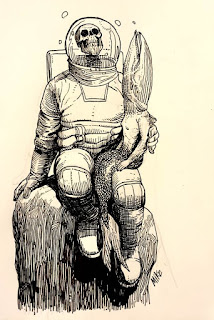 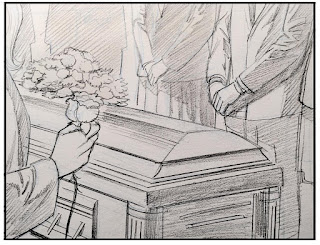 I'll be participating at the Artistacon this weekend in the Lyceum in Burlington NJ along with many, many other top pros. Artistacon will be held Saturday, September 17 (10 a.m. to 7 p.m.) and Sunday, September 18 (10 a.m. to 5 p.m.) I'll be there both days and doing a demo with the Phantom as well as doing portfolio reviews and critiques.

Drawing & Inking The Phantom Demonstration
Mike Manley
You can see the full guest list here.
Posted by Mike Manley at 10:07 AM 14 comments: 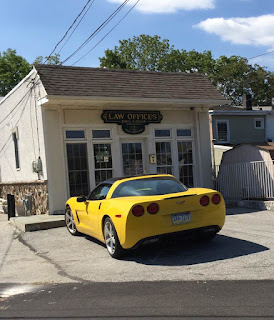 Today while driving out to Media, the county seat to pay my real estate taxes I came across Sam Driver's yellow Corvette parked in front of his lawyers office. I wonder if the real life lawyer here is a Judge Parker Fan?
Posted by Mike Manley at 5:38 PM 4 comments: 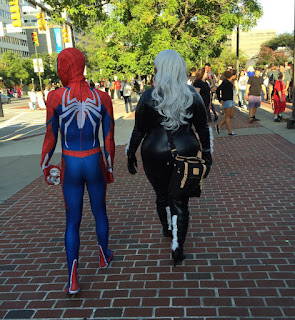 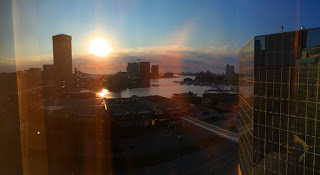 Last weekend I attended the annual Baltimore Comic Con and had a blast! First I got to see my best buddy Bret Blevins for the first time in the flesh since 2010! Last year he was going to come but broke his collar bone-but luckily no bones were broken to stop this meeting. 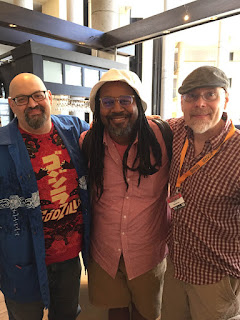 Bret, Jamar and myself at a power breakfast

I also just like this show because Marc Nathan and crew do it right, there are plenty of pros and just a few TV/Movie types so the focus is on comics and so we get lots of people who are readers and not like the Wizard shows which is mostly a bunch of people looking for prints, autographs, etc., and who are not readers. I also love this show because I get to see many pros I like and admire like Tom Palmer, Garcia Lopez, The Simnsons and more. Up early for breakfast and you can talk to guys like Neal Adams or Howard Chaykin and dinners are great too. Its so great to talk to Tom and hear about the good old days at Marvel and his experiences there and in advertising as well. 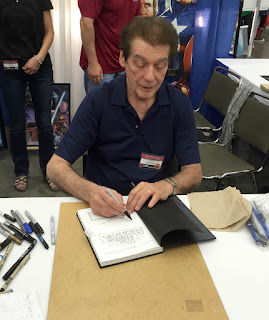 The amazing and gracious Tom Plamer

I checked into the hotel on Thursday but worked till about 3PM on Friday as I had to deliver my week's worth of strips, which I had inked but had to letter and color. I knew Friday would be the slower day and deadlines are deadlines. I saw plenty of regulars at the show, fans and pros I see every year and did some nice sketches. I was so glad to get to meet and spend time with fellow Strip artist June Brigman and got to meet the great Joe Giella who retired from comics after 70 years! June and her hubby Roy have taken over Mary Worth from Giella and now belong to the trifecta of Marty Worth, Rex Morgan and Judge Parker. 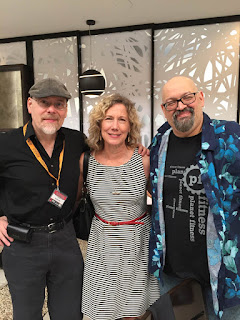 Bret, June Brigman and me 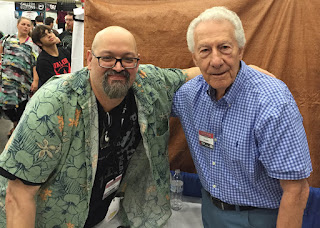 The great Joe Giella and me

Unlike some cons, NYCC or Sandy Egoes this con you can stop and chat with people. I met a nice family from Belgium I did sketches for and another artist from France as well as Phantom and Judge Parker fans. I even brought along strips to show to a few who sat behind the table as we talked for a while. I rubbed Skull Rings with Alex Saviuk and long time pals Thom Zhaler and Steve Conely and hung with my other best bud Jamar Nicholas. My friends Will and Alina came down to share my room two nights so the could do the show. 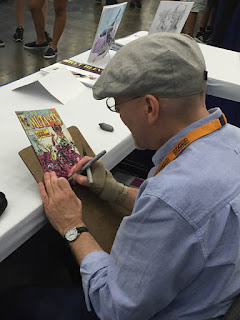 I didn't attend any bar-nights or the Harvey Awards, but instead either had a nice dinner with friends or caught up on some sleep. I am not into awards at all but I heard Dean Haspiel gave a nice speech. I did reflect back on seeing the late Darwyn Cooke at the show last year and he came up and gave me a big hug--then a few months later he was gone--it does make you think about how precious time is as it flies along. 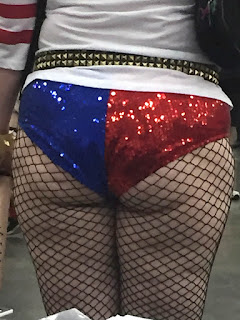 Man, what do I spy with my little eye looking up from a sketch...


I have to say I saw more female butt cheeks those 3 days than at any other show due to all the Harley's walking about---though seeing the little girls dressed up like that with their hiney exposed as well was actually disturbing. I'm no prude, but seeing girls under the tween age like that is kinda' wrong, if I had a daughter she'd have to dress as the regular Harley till she's of age---sorry! 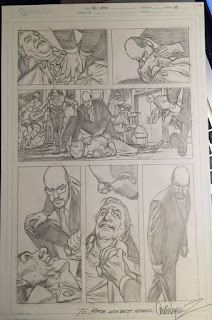 I didn't shop for anything as I still have way too much crap here but I did score a fantastic pencil page by Garcia-Lopez---my hero!

Then it was all over except for a nice breakfast--then it was back up the road to Philly and back in the drawing chair to get the next week's Phantom in and onto more Judge P which I am finishing now, 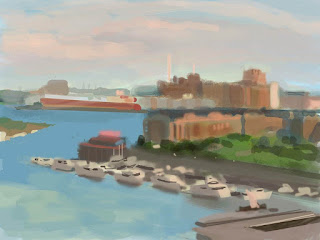 I did try and do a digital plien air painting from my hotel window after the con as the sun set before we had dinner. 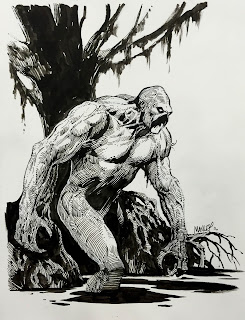 Francesco's first month on the strip and the ongoing "death of Sophie" story line continues to spin out with great response from readers--even some snarkers. It seems killing characters off gets peoples attention on a often sleepy strip like the Judge. But sleepy time is no more!! But all outstanding story lines are going to be wrapped up and by November we will be in a new age on the strip. 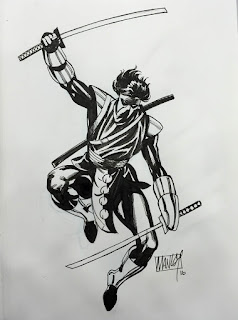 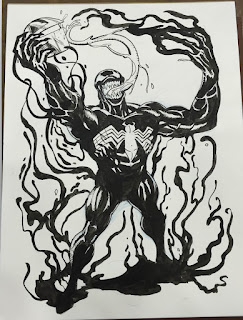 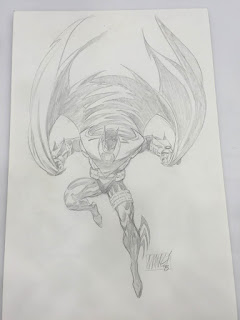 One fan even had a 23 year old Azbats sketch I did--Yikes!

One thing that always seems to remain consistent is many readers impatience for things to happen in the strip and they don't get the difference between comic strips and other media like movies, TV etc. Comics moves at a different pace, the one of your own CPU and its not a "push media" like TV. Its true the strip was slow, often too slow for my own tastes but a week can be only ten minutes in strip time, or a month depending on how it's written. 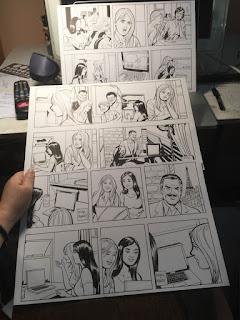 A Phantom week and Judge Parker week in production 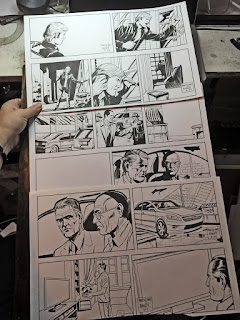 Abbey and Sam drive to the accident scene which I imagine was maybe 60-90 minutes away, say from Philly to north Jersey. Thus it could be raining at my house and not across the Ben Franklin Bridge or even downtown Philly. I have seen it rain across the street out west, while my side was dry. I think when fans take things too literally they kind of ruin their own enjoyment and the fantasy.

We've never ever seen anyone go to the bathroom, nor hardly ever shower--but we assume they do. Wilson had a pace he inherited from LeDoux and Ces and I will work our own pace out as we go along, but I definitely want some characters to die off, some literally and fade out for a long while to give the strip more fire and drama. By my count there were 26 separate plots or sub plots that Wilson had laid out, most were dropped and moved  from or never resolved, so we are wrapping all of them up in a nice body bag. Its been great to get such nice private feedback from fans about the current story that I think I'll pitch another to Ces next year. Alien abduction perhaps...

I was even thinking of having some kind of contest for real JP fans where I'd give away a few originals as prizes. I'll have to put my thinking cap on in the next few weeks to work that out.
Posted by Mike Manley at 5:39 PM 4 comments: