I took a bit of a break from the blog here due to the super-busy schedule I've had recently with work, visiting parents and the Thanks-Fer-Nothing holiday. This afternoon Echo and I had Shanna come over for some private modeling, and it was the first time in weeks I have had a chance to do figure drawing, but hell, I am rusty as ****!

Here is the only semi-decent drawing I did. 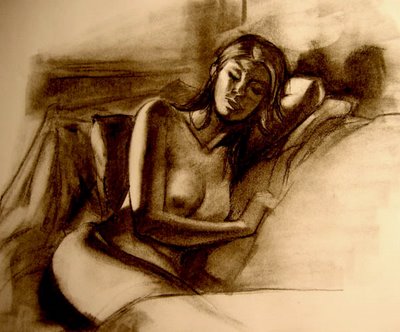 I just finished up my sequence on the WB Adaption of DC's New Frontier but still have quite a bit of board work left on my second Growing Up Creepie. I got to board a sequence with John Jones AKA Martian Manhunter and Slam Bradley and then a sequence with Jones and Batman in the Batcave. I hope it's animated well on the DVD.

Next up is laying out an issue of Aquaman and doing a Secret Agent Corrigan story for King features and an over Seas publisher.
Posted by Mike Manley at 1:30 AM 8 comments: 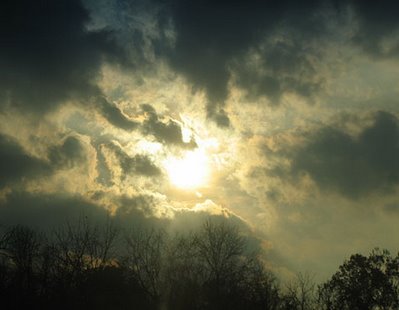 A beautiful, yet eerie sunset on the way to York. 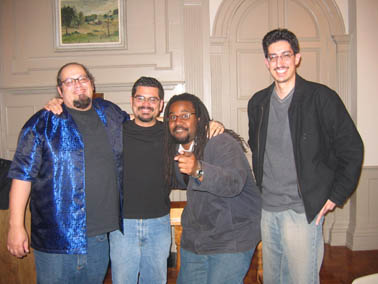 A few weeks back Echo, Jamar and I rode out to York ,PA to give a talk and really a portfolio review to Mike Hawthorne's comic class he was teaching at the cool revamped main library. Mike is one of the best younger guys in comics today and he's also just a really swell guy as well. It was a fun trip that was made even more enjoyable by riding with that cut-up Jamar. We meet Chris Moreno another cool artist who's also friends with Mike and was there to also give a portfolio review.
Posted by Mike Manley at 2:25 PM 2 comments:

No figure drawing...back to boards

Last night our model Shanna called out sick so there was no figure drawing officially at school, but there was an impromptu session in the next class over with your's truely as the model. Teressa who teaches the Drawing 1 CE class was having her students take turns drawing each other, so while I waited for Echo to show up and drive us home, I sat as the model (clothed sillies!)

When Echo showed up both she and I posed, sitting together and several of my students who would have drawn in the regular session came over to draw in Teressa's class. It was fun and we spent about 45 minutes posing before we left, Teressa did a cool drawing of Echo and me which she gave to us. I left it in my office as it was raining but I'll bring it home and post it next week.

This week I am aback boarding on two jobs, the Direct to DVD New Frontier which is the adaption of the Darwyn Cooke DC miniseries. I just boarded a section featuring batman and John Jones. It's a short section since I am also boarding another episode of Growing Up Creepy for Discovery Channel. I still have to finish my Turtles issue and I have a few other job possibilities on the horizion, one featuring an old comicstrip character. More on that if the job is 100%

The rain last night and this morning has washed away most of the remaining leaves and color giving this morning a soggy drab look. Good day for warm coffee and working.
Posted by Mike Manley at 11:12 AM 2 comments:

last night instead of handing out candy I was at the weekly figure drawing session.

I did take along some candy to hand out to the ghouls and gobblens attending the Halloween drawing event. These are all the ususal 2 minute-5 and 20 minute drawings.