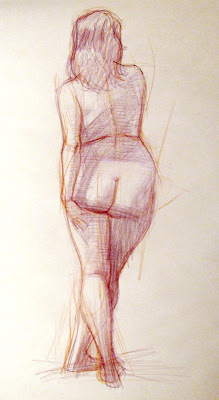 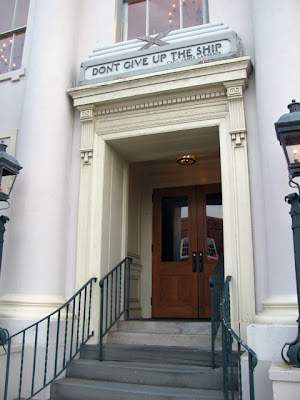 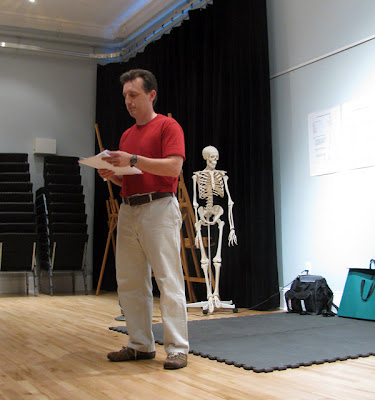 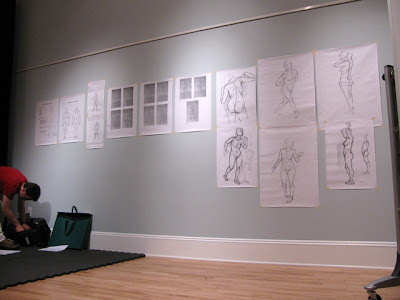 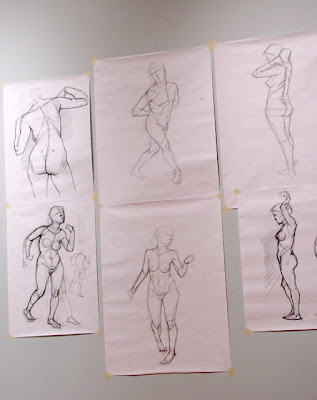 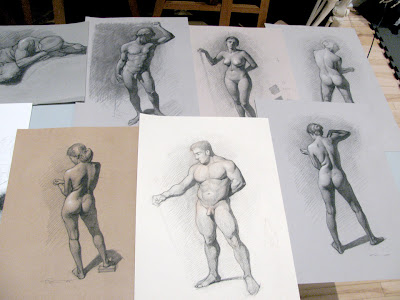 Neilson also run his own school as well as working full time a a painter. The event was a lot of fun and my buddy and studio mate Dave met me there. I plan on attending more of their figure drawing sessions as time allows. The figure at the top is one of the two quick drawings I did starting with the Reilly system. It's in colored pencil ( because I forgot my charcoal pencils) on newsprint and took about 15 minutes or so.
Posted by Mike Manley at 2:44 AM 1 comment: 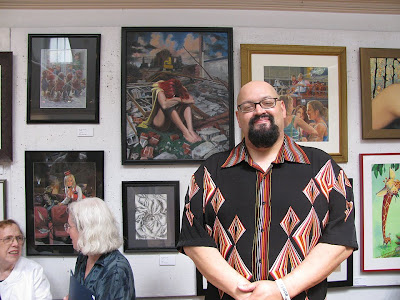 Last weekend was the reception for the 2010 Phillustration show at the Philadelphia Sketch Club. I'm posing in front of one of my entries, one of my Supersad paintings. This year I entered three pieces and had them all accepted. I entered the Super sad paintings, the Robin Hood piece I did this spring and one of my SEPTA paintings. Two of my friends from PAFA also entered and had their pieces accepted. They had some pretty heavy hitters enter the show this year like Boris and Julie Bell, Charles Santore and Richard Williams of Mad fame. This show was much, much stronger overall this year which is good.

Last weekend I attended the opening reception and hob-knobbed a bit and saw a few familiar faces. The show was orchestrated by Rich Harrington who is a great guy and teaches over at Moore College. Rich is a funny guy and was a great MC. All of the student winners got free art supplies provided by Dick Blick. There was wine, cheese and lots of good spirits all around, I look forward to next years show which I hear might be moved to the fall. 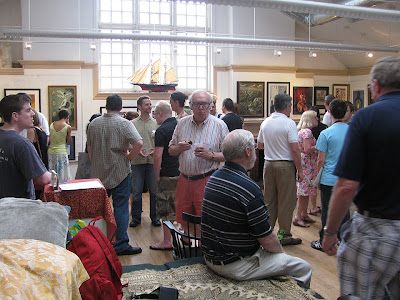 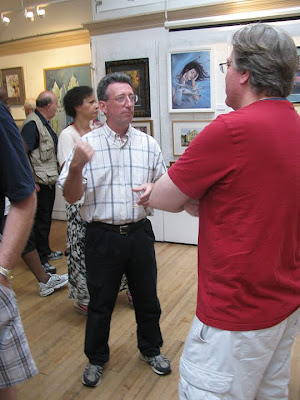 The Host with the most, Rich Harrington 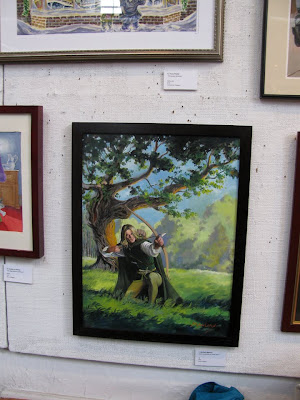 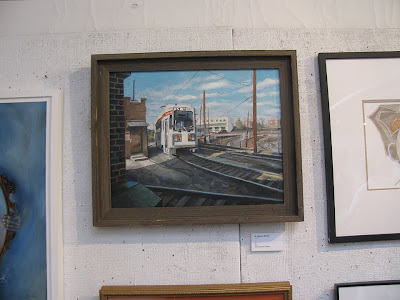 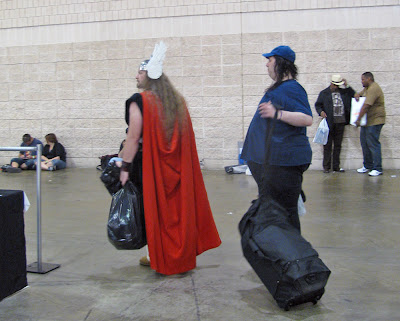 I hit WW Philly for a short stint today and I am busy this weekend so I will make a more complete blog later in this week after deadlines. So just a tip of the hat and a wag of the hammer till then....
Posted by Mike Manley at 1:44 AM 3 comments: 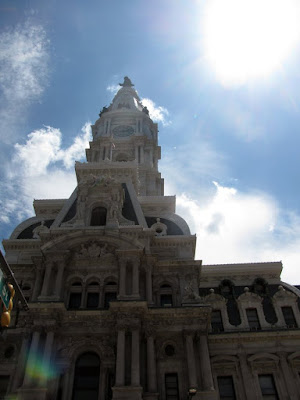 Yesterday I moved into my new studio at PAFAright in the heart of center city Philly a few blocks from City Hall and it was a wonderful day. I'd been looking forward to this for a long time. 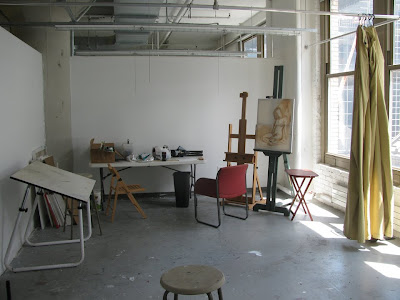 My buddy Dave was there to help me shlep my stuff in and the Parking Gods smiled upon me as I didn't get a ticket while I pas parked outside loading in my gear. I am in a south facing, gang studio on the fourth floor with large windows. I am sharing the studio with a few of my best friends and DPC buddies--so what could be better!

I've had a studio for decades but this is the first time I've ever had a studio just for painting. There is still a lot of things I need for the place, but the seed is potted and the place is growing already. I found a few items left behind by fellow students like the pink chair to ad on the first day. I hauled in one of my extra drawing tables and a folding table and an extra easel. PAFA gives you one, the green one, but I brought in the easel I got at Dick Blick last year. Dave already found a coffee maker somebody also left, so already the most important piece of equipment has been procured! 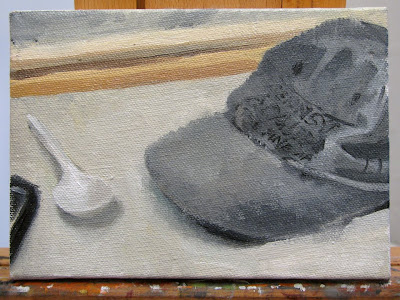 And to get the ball rolling I did this quick little painting the first day, just the christen the studio and kind of bless the spot if you will, put my stamp on it the first day by creating something. I painted my hat and spoon and a bit of my iphone . I had a little 5 x 7 Blick camvas for doing these quick little spots. 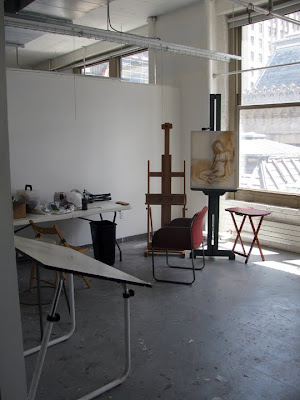 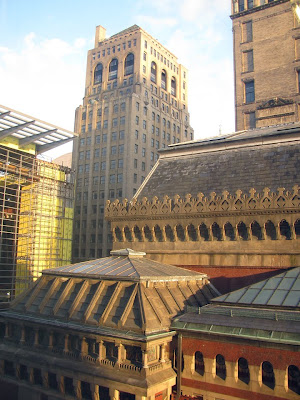 The studio has great views of the historic Furness building and I snapped these shots as the sun set on my first day in my new digs. I plan on being in the studio painting at least 4 days a week, allowing for my work schedule with my commercial jobs. 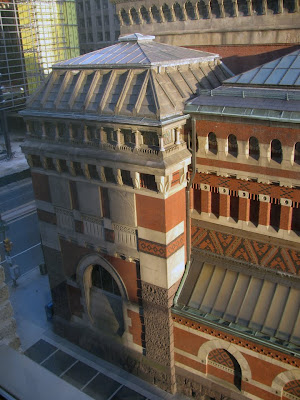 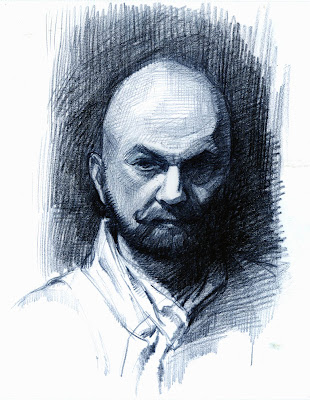 While cleaning up a pile of paper and drawings I came across this drawing I did sometime last year of,Tim, one of our models at PAFA. Its in prismacolor pencil on a sheet of Marvel Comics 2 ply bristol. I think I did this after the portrait painting class I took with Al Gury last summer, Tim was one of our models there.
Posted by Mike Manley at 9:44 PM 2 comments: 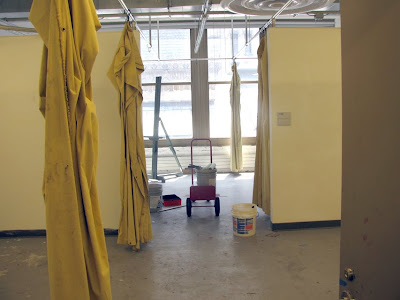 Tomorrow I will get my keys....and I'll be moving in this week to my new studio at school.
Posted by Mike Manley at 7:57 PM 1 comment: 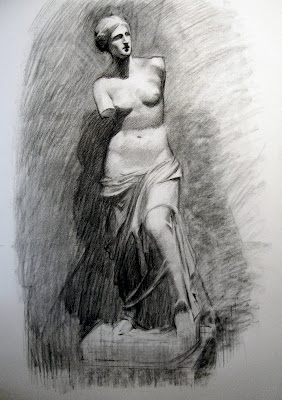 One of the great things about PAFA is having that awesome collection of casts to draw, paint or sculpt from, Another student, Chris was doing a sculpture of another one of the casts and the reporter interviewed us as we both work. I was honored to have Al ask me to represent the school in this spot. I had to be miked up and the camera man placed the camera around me in several spots to get me drawing. They even had the shots of Al giving me some feedback on my drawing and also on Chris's sculpture. man those lights were hot and the place was already a bit humid as it was around 90 in the city today. I came in early to get something going so when the crew came over there would be enough work under way. Its weird drawing with hot TV lights on yer head, but I have been on radio and TV before and I think having taught a lot removes any butterflies. The whole crew was really nice and if they use me I'll post the link when the interview or the piece on the school runs.
This is in Charcoal on Rives BFK paper
Posted by Mike Manley at 4:12 AM 6 comments: