Snow, heat, fog, ice, rain, you name it, we had it all this week in Philly, some in the same day which made painting interesting and a challenge at the same time in the studio at home and even in school. The light was all over this week and that not only really effects whats happening as you paint but what I can plan on doing on any given day--especially if I want to work with a model in natural light. It also effects the time you as the daylight hours are still very short and the great light or angle of the sun after solar noon is a narrower window of time.

In my painting class with Scott Noel we once again had a cool set up, for me one of the best he's had in a long time and I wish we had more that one session on it. He called it his "romance cover" set-up. As always Scott had plenty of books out to help, inspire and discuss, he'd call the class over on breaks to point out certain things or stress points he wanted to make. 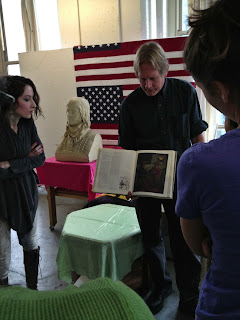 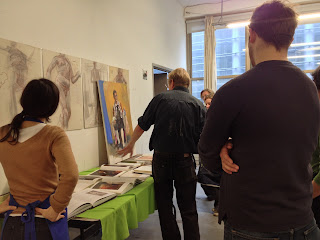 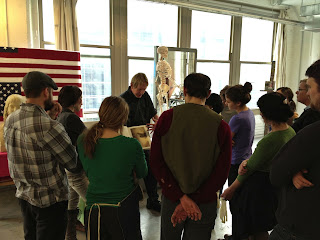 Scott is one of the best teachers, maybe the best teacher I have had in my time all through PAFA, the one I've had the longest conversation with, even though at times we just disagree on things, on esthetics. But he's always challenging me and continues to surprise me as well. I think this is an important point in the teacher-student relationship, which can be as complicated and heated as any you'll have, but more important to me as an artist than most relationships. The old saying "If you meet Buddah on the road, kill him" holds true. The idea is to kill the idea of perfection, or concept is essential to grow with and beyond your teacher. This is certainly more of an important idea in a masters program--the path to enlightenment as an artist in the western world--ha!

The drawing below is one of the many drawings or paintings Scott brings each week to class. I always love seeing his work. 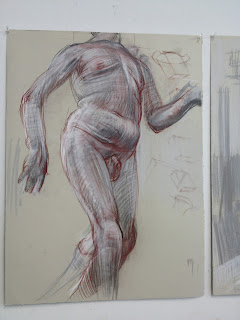 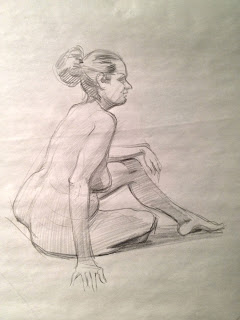 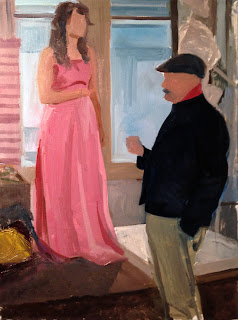 This is the painting I cranked on in the class, there was a lot I wanted to do but thought I had to keep it simple in the end I was frustrated with it as I usually am with class work. I sometimes feel rushed or unfocused and sleepy! Eventually the old brain is cooking but I never really feel the flow. Scott really liked it--which is something--but I just tossed it on the pile...another battle lost.

The drawing is from Bruce Samuleson's Life Drawing seminar, litho crayon on newsprint, I cranked out a few but this is the only one that was "OK". 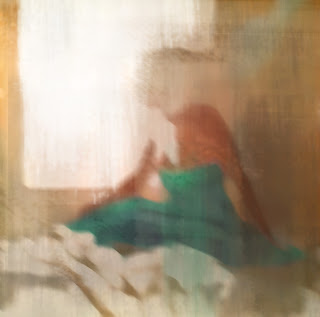 At home in the studio, (my whole house) I started two new paintings from life and the picture about is one of them that I experimented with in Photoshop.Its an oil painting 30 x 30 that I added a bunch of digital painting too.

Its tra-digital and I think I will explore some paintings this way as well as staying traditional like the rough-in below. Continuing of with the beauty or bride series I'd pouring the gasoline on right now. I figure some will be good I hope and some just get burned up and be messes, but you have to risk to grow. 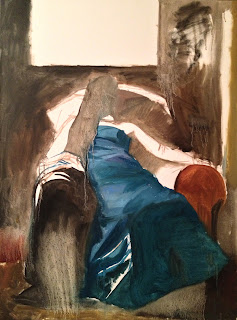 In my Writing and Research seminar wit Kate Moran we had to choose a few paintings of ours and talk about the influences of modern painters no my work. The facts are that the biggest influences on my work are not modern painters, and certainly not many post 1970 which is the focus of her class.

I showed my work along with artists that were an influence on my work. Moran wanted it to be artist 1970 and onward and frankly most of the artists that are an influence on my work  are dead. There are a few modern artists, I like, Zhaoming Wu, Steve Huston, Hicks, Lipking, Desiderio to name a handful.  But Wyeth, Sargent, Zorn, Cornwell, Rockwell, Fechin are all much bigger influences. I just found out about an artist named Balcomb Greene who is very interesting.

I showed my favorite Sargent painting and my painting in the Brandywine, the houses below are from the Brandywine as well. I showed them with Hopper who is still a big influence. That fact is I have a lot of influences, they are like rocks in a stream, so many you can't see them all. I am in some cases just as influenced ny Maurice Noble's designs for Chuck Jones cartoons as I am by Maynard Dixon. John Buscema as much as Michaelangelo. 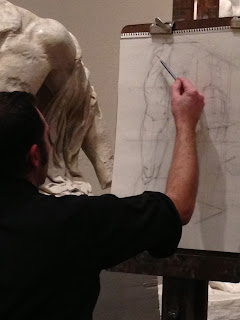 Wednesday I happened  by chance to sit in on a perspective lecture by Michael Grimadli that he was giving in the cast hall.  Michael Grimadli  was set up and doing a drawing demo on perspective, so I decided to stay and check it out.I guess for the next few weeks Grimaldi, Peter Van Dyke and Scott Noel and maybe other teachers are going to be doing demos on perspective that are open to all of the students. I think this is great and they have had a few events like this in the past with Van Dyke. 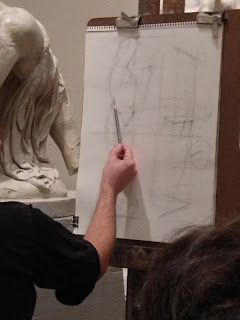 Grimadli talked and answered questions as he sketched in the cast. Some of the concepts he was throwing out were:
1. Work from inside to outside
2. Drawing concepts should never over ride  visual perception.
3.The line of thrust vs the line of action.
4. Check for the central core of immovable landmarks
5.The lights ource must be considered in perspective. 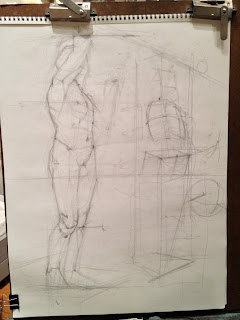 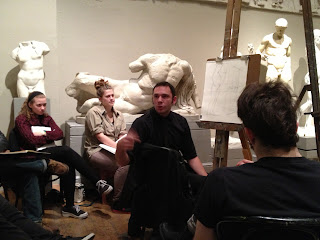 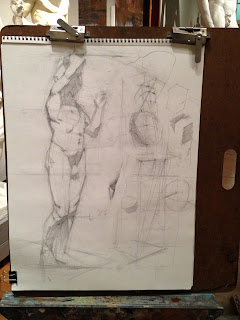 This is where Grimaldi stopped his demo which he said he will pic up next week. He is such a great artist and teacher and this is one of the things I love the most about the school, these are real learning opportunities and its great to have such giving teachers. 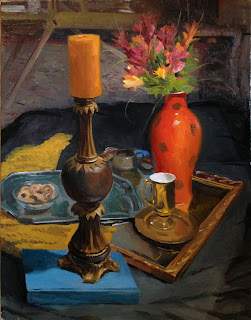 Then yesterday I got together with my Dirty Palette Club buddies and we set up a still life and spent the day painting and eating perogies and Mexican food. This is the still life I did, its in oil and 18 x 24. There are few things I enjoy more than painting with my friends and this one the first time we have painted together since last summer.

Next week is annual school-wide Open Studio on Friday Night, so it will be a busy, busy week, lots to do and clean up and haul out of the studio and make the shop look nice for visitors.