First Day In The Skull Cave

Today marks my start on The Phantom as the regular artist on the daily strip as the torch is passed officially on the comics page from the late Paul Ryan to me. Its hard to still process that it all happened so fast, Paul passed away only two months ago and within a few days of his passing I was hired by King as his replacement and had to hit the ground running fast. Luckily Tony DePaul the long time Phantom scribe as well as the folks at King and fellow Phantom artist Terry Beatty who does the Sunday strip gave me as much help to get up to speed quickly as I came in on the very end of the current story line. I also did all of this while still keeping up on drawing Judge Parker.

This was exactly the same situation that lead me to get the Judge Parker strip when Eduardo Barreto passed away back in 2011. No artist likes to inherit work this way but the comic strips must go on and this situation is very similar to what happened to John Prentice jumping into the drawing chair on Rip Kirby when artist Alex Raymond was tragically killed driving Stan Drake's new sports car. King was is a panic to replace one the the greatest cartoonists ever on short notice.

I met Paul only once that I remember clearly at a con many years back though we rubbed shoulders at Marvel on books like Quasar with me following him on that book when he left to do other books like The Avengers and The Fantastic Four. Paul left us all a great legacy to enjoy and be inspired by for the ages with his art for Marvel and his long run on the Phantom.

I posted the pencils for today's first strip and the final versions and you can see there were some changes swapping the King and the Colonel. its hard to jump in on something like this and grab the characters and the feel of where the story is at and the actors as it were so I spent as much time as I could reading over the last several weeks of the story and Paul's art.

I also belong to s small club of artists who have also drawn both Batman and The Phantom. They include Jim Aparo, Terry Beatty, Don Newton, Carmine Infantino (As a Ghost for Sy Barry), Joe Giella ( Ghosting for Bob Kane), Graham Nolan, Paul Ryan and myself. That's pretty good company! 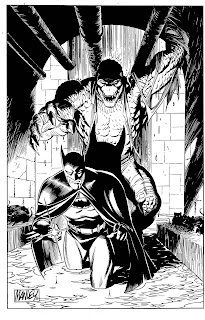 Here is a recent commission just off the drawing board I completed for a fan of Bats and Killer Croc based on my cover for Batman 512. For now back to the drawing board!
Posted by Mike Manley at 2:45 PM 12 comments: