This weeks work is on the blog
Posted by Mike Manley at 10:19 PM No comments: 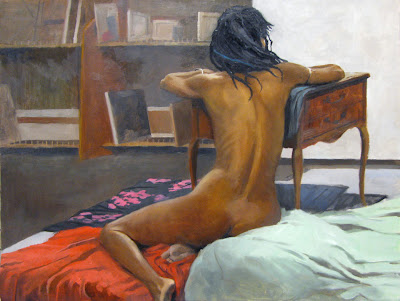 So this is where the session ended and it was teh end of the pose and the end of our 3rd week of the semester. next week we will be 1/4 the way through--and I can see that time is going to fly by fast. I will go back in a few days and touch up a few spots on this but basically she is done and we'll be moving on to the next pose on Monday, this time with two figures. I have been loving the liquin Detail medium and I have to say it really comes in handy at school in the battle ground of the classroom.
Posted by Mike Manley at 1:10 AM 4 comments: Today started the 3rd week of the semester at the Academy, and it was my second pass at painting with the model in this pose, we have one more pose Friday and then we start another pose, next time with two models. Doug also reviewed the paintings for the bad composition exercise and basically said I failed to make a bad composition with the painting of the peppers. maybe I'll do another one for next week and see it i can take the bad composition prize.

In Al's class we were right off into the deep end when the model(who was late) showed up. This is what I blocked in today with the model, I will have I think one more session next Monday and then we are done. So the basic drill is we have to move pretty fast and try and block in as much as possible in each class, in fcat I usually stay longer to try and block in the backgrounds/set-ups when I can. 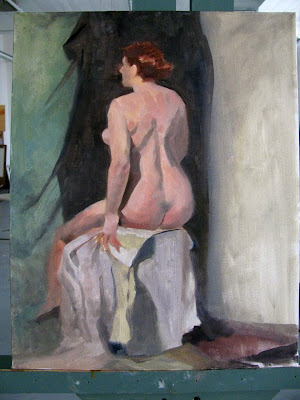 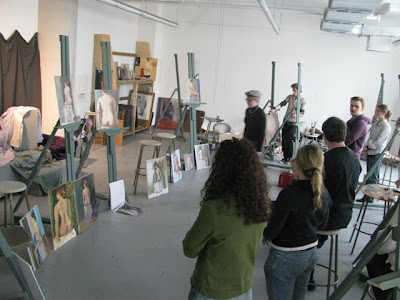 here are a couple of shots of Al giving us our end of class crit where we push all of the paintings together to check out what everybody's done. 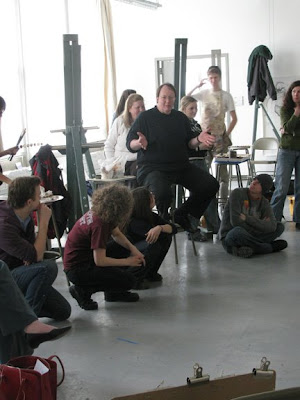 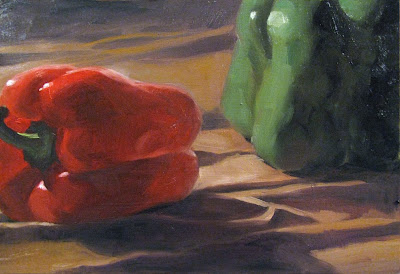 This painting I did this evening while watching the Simpsons, Family Guy, et. I hate the Family Guy by the way. Its for my figure comp class with Dough Martenson and the homework was to make a bad composition and paint it. So I plopped two peppers I bought at the store today down on the dinning room table and went at it. It's oil on MDF, about 9 x 12 I guess, it was on an odd sized small panel I had laying around. I used Liquin Detail as the medium so it would start tacking up right away.
Posted by Mike Manley at 12:29 AM 4 comments:

The end of Week 2 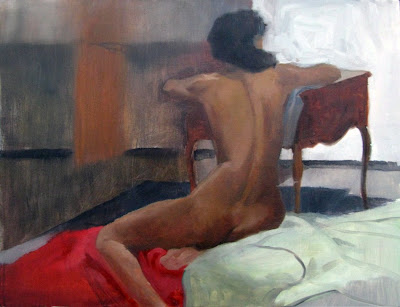 This is the painting I'm working on in figure comp this week, I took the block in a little further than before, but this thing is still a work in progress....
Posted by Mike Manley at 2:16 AM 4 comments: 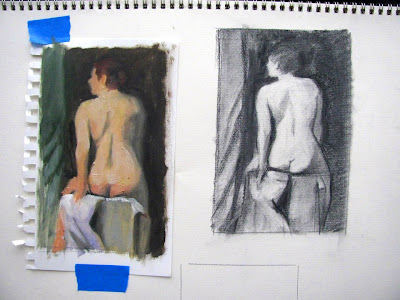 Though today was MLK day classes went on as scheduled at PAFA and that means it was painting with Al day, my Monday painting class with Al Gury. We officially started our first pose today, and that meant a sketch, then a small study. After this we can go next week to the bigger painting. the study was done in charcoal and the Oil Study was done on Strathmore sketch paper. I just taped the oil study up next to my first sketch and went at it. So next week I'll start the larger painting and the pose should run 2 more weeks. 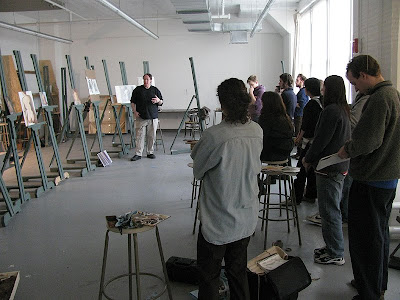 After we all did our sketches and started the oil studies Al gave us a crit at the end of the class.
Posted by Mike Manley at 7:54 PM 2 comments:

Manley Goes to the Martians 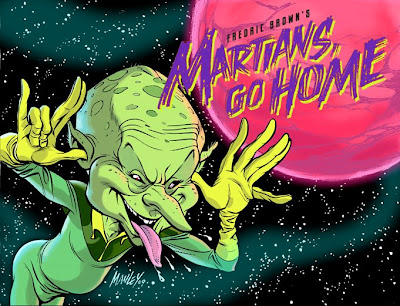 This is the promo art for a post card to promote the new comic series I'm doing for Sequential Pulp Comics, an adaption of Fredric Brown's Classic Sci-Fi book, Martians Go Home. The first issue will be out in late spring or early summer an will be published through Dark Horse. I'll be penciling, inking and coloring the series myself and my best buddy Bret Blevins will be painting the covers. This will be the first comic series I have done in years and I'm looking forward to doing this series because it combines two things I love, Sci-Fi and Humor.
Posted by Mike Manley at 11:29 AM 5 comments: 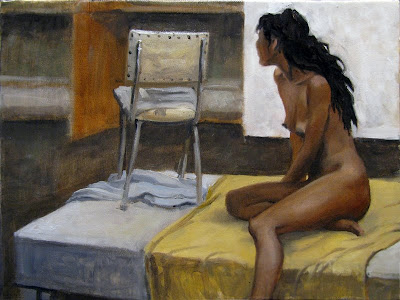 This is the first painting done in my Figure Comp class taught by Doug Martenson. This was a two session pose, the last session being today during the uninstructed portion of the class which happens every Friday. So it's the first official painting of the semester.

As always you are fighting the changing light this time of the year as the sun sets early so values change pretty darn quick about an hour into class which starts at 1pm. This causes you to rework things, constantly revisit the entire painting. I tried using a new medium today, Detail Liquin, which is thinner than the standard Liquin and dries fast like the thicker medium but allows you to work thinner. Alex Kanevsky uses this medium I am told. This helped tack the painting up quite a bit as I worked, racing the clock. In the end I am happy with parts and in others I wish I had more time as the values were pretty narrow on a lot of the figure. I never got to address the head as much or the hair, but them's the breaks in a class painting.

Lots of things are different this year for me personally and career wise and I am really knuckling down even harder in school. I have big goals and big dreams and I know I'll never get anywhere near them unless I up my game even more. That doesn't mean that I won't have fun, but last year at times I feel I wasn't as focused as I could have been, 2008 was a Fucking Shitty Year, but 2009 seems to be doing much better and I feel more balanced and more focused, my goals are clear, now I have to work hard to get there.
Posted by Mike Manley at 1:46 AM 1 comment: 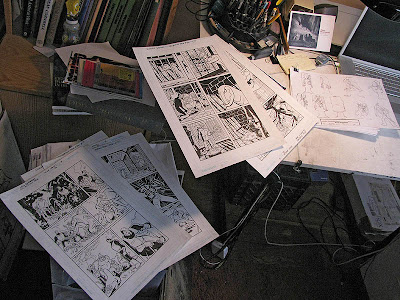 Here is s shot of the studio today, and the finished 8 page job I just inked for DC's Action Pack #36 featuring the Secret Saturdays's, who's show was just given a green light for the 3rd season.

I scanned and loaded the job on the DC server and now off to work full time on my next comic project that I will announce here in a few days.
Posted by Mike Manley at 8:04 PM 3 comments:

Labels: In the Studio, Secret Saturdays 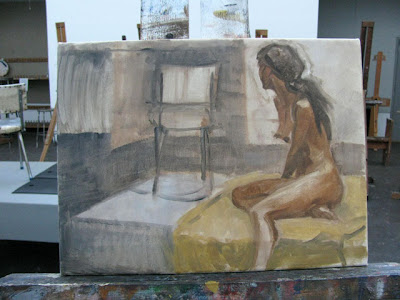 Today was the first day of the Spring 2009 semester and the kick-off to the school year for me as a student. next week i start back as a teacher at Uarts, teaching storyboarding once again.

As a student I have two painting classes, one printmaking class and Art History II and now I am officially into my second year as a student in the certificate program. Today was the first class for both Life Painting 2 and Figure Comp. I'm the class monitor for the Figure Comp class as well. The painting above was done in the Figure Comp Class which is taught by Doug Martenson who I had the first semester in year one for painting. I started this oil sketch 3 times, wiping out what I did until I came up with this composition, I'll have one more class with this pose on Friday. 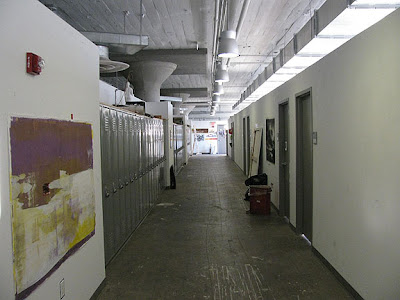 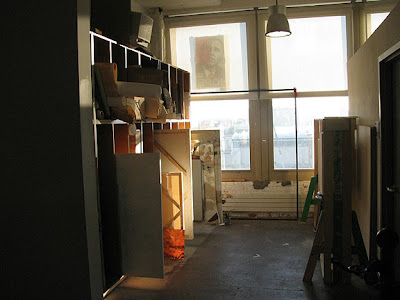 I think this pic sums it all up, Art and Hope might be the themes for me this year, and lots and lots of Hope! 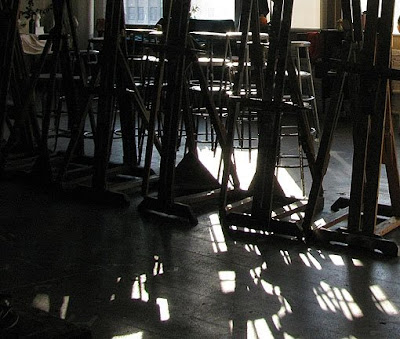 The Still Life room lay quite awaiting the earnest brushes of the my fellow student.
Posted by Mike Manley at 6:23 PM 4 comments: 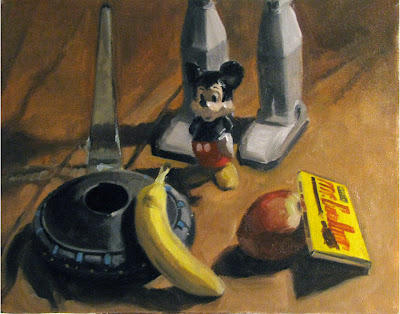 This is the still life I did today in our meeting of the Dirty Palette Club Head on over to see my process and the work by the other members.
Posted by Mike Manley at 3:22 AM 4 comments: 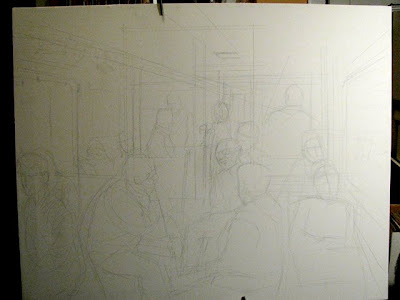 Here is my initial rough in of a bigger painting I'm working on in my commuting series. As I make each big step I'll post it up and talk about what I'm doing. One of the tings I need to do is get a bigger easel, which I hope to get in the next week or so. I roughed in with a medium charcoal pencil and the canvas is a Dick Blick canvas 24 x 30.

The next step will to be define the drawing more and work out details, better then fix it and start painting.

I'll have some smaller paintings underway as well.
Posted by Mike Manley at 1:25 AM 3 comments:

I have started another blog The Dirty Palette Club with a bunch of friends and fellow students mostly from PAFA. But we also have cartoonists, and animators as members as well. We decided as a group to get together outside of the classroom environment to paint, draw and create en mass to enjoy the experience and frustrations as artists together and to learn from each other. Also to just have fun painting together in a looser atmosphere.

So stop by from time to time to see what we are up to. I am upping my game this year as an artist. Oh, I'll still have plenty of commercial work, the usual mix of comics, animation and Draw! magazine, plus my teaching and being a student myself, but i want to focus on working on a series of paintings and themes as an artist and start entering juried competitions and events. One might ask how I can possibly up my game with all I have on my plate? Well I just have to be more organized and be willing to suffer a bit more. The spring semester will go fast, and soon the year will be half over and summer will be here. So the paintings I have been posting while on break are just me sort of limbering up for this year's harder push.
Posted by Mike Manley at 11:44 AM 3 comments: