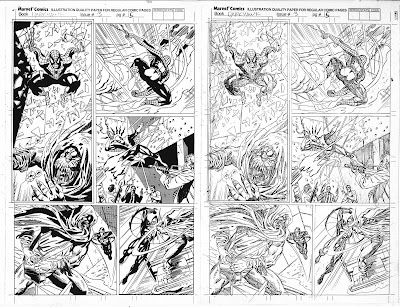 While going through the huge pile of old folders of my art I came across there two copies from my work back on Darkhawk for Marvel, these are circa 1991. DH was still a fresh experience for me and I was still pretty stoked to be doing my own book at Marvel from the start where I was the main creative artistic force. That feeling waned as I worked on the book as at that time the book didn't get much love from fans or even at Marvel. Those were the X-men days and anything NOT X-men was basically not cool. But I the decades following my run I constantly get people telling me how much they loved what I did, so maybe people just didn't write a lot, and this was the pre-internet days. I was inking with a combo of radiograph, Hunt 108 pen nib and # 3 or 4 Langnickle brushes, man, this were the BEST brushes.
Posted by Mike Manley at 1:47 PM 2 comments:

While cleaning up and going through some files I cam came across these pages from my run on Solar back in my valiant days. I had fun on this book and think the inks by Bob Wiacek were great, I loved having him ink my work. I think tis is a great example of what an inker contributes and how much they can add to a page. 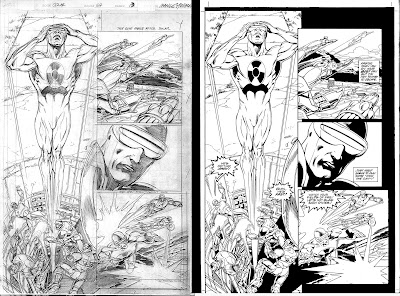 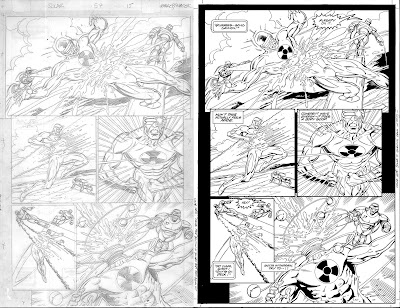 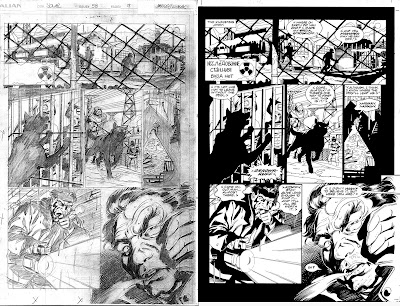 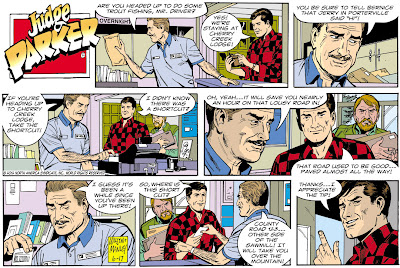 Here is this week's Sunday---or rather lasts Sunday's strip. I am late with this due to my laptop crashing on me. the good news is that I'm getting a new laptop this week.
Posted by Mike Manley at 3:39 PM No comments: 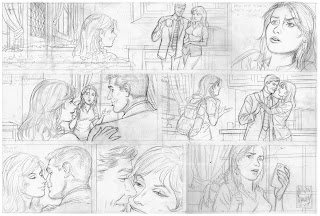 I thought I'd post a little again on my process on doing Judge Parker after being on the strip for a while now. I am still very much a traditional artist, especially with comics and while part of the process is done in photoshop, like the coloring and lettering, but I am still all about having an original piece of artwork. Pen and ink on paper is the esthetic I was trained to and still subscribe to. In the past, when I first started in the strip, I used to do layouts for the Sunday strip. I can and have worked digitally, but the facts remain for me that in the future the paper original will last a lot longer than any digital version; it will have value as an artifact, a piece of art and craftsmanship--of history! Heck, in just the past decade so many platforms have come and gone, Syquest, Jazz, Zip drives, you name it. I am also far superior using traditional tools than any program, which at it's best is an imitation of what I can traditionally do. Nothing yet I have used on a computer has made the cut--nothing equals the tactile feedback of my hand on the paper, the snap of a fresh 108 nib, or the dry brush effects I can pull with a good kolinsky sable. Sure, some might say "who cares", but not me, nope, I trained like a super athlete to get these skills and I want to use them! So for me unless the job demands I do it, I will stay "old school" as they say.

Sometimes in the past I'd blow up the layout and trace it off using my lightbox, but now I just wing it and go for it, I draw straight ahead to the board and trust my guts. If I don't like what I've got going I just erase it and start again.

I think what I am after besides always clear storytelling and solid drawing is a freshness. I am a huge admirer of the work that Leonard Starr did on On Stage, one of the greatest comic strips ever as far as the soap opera types, and Starr was one of the best draughtsmen ever. The great, clear drawing and staging, the 'attractiveness" of the work was always top notch. I also think of John Romita's work and how he also made everything smart and attractive in his romance stories. He brought that sense of style and sophistication to Spider-man.

Judge parker however is almost never as dramatic as Spidey, and the format of the comic strip is much more rigid, especially the daily strip. I always admired how my predecessor on the strip, the late Eduardo Barreto made the strip more dynamic by playing around with panel sizes, etc. I think this can work well depending on the story or the sequence, but I also have the feeling that sometimes we let the camera shot, let the story play out and just draw it as best as we can. Sometimes being too funky with layouts can be distracting. The top tier or row the the sunday strip must always be laid out as it is above, and the row is also dropped by some newspapers who chose to run the Sunday strip in a shorter version which contains only the bottom tow rows. Of these two rows the last row I have the freedom to change the size of the panels, overlap, etc.

I pencil the Sunday on a sheet of 12 x 18 illustration board using an HB-B lead and then ink using a Hunt 108 and either Faber-Castell (S or M)or Pigma markers ( 0.5-1) and the markers I use are all archival and water proof. I like the markers for the small faces and anything mechanical or often backgrounds. I use Dr. Martins High Carb ink when I can find it and I have been using the Dick Blick Studio series, no 4 for my brush work. I still have some Kolinsky sable brushes I bought 20 years ago, but I try and save those. Typically I hop in and do all the line work first and then go back with the brush work for the blacks or feathering, still pretty traditional. You can compare and see what I change from my pencils to the inks as I feel the inks is the real final product so I am always adjusting things from the pencil stage.

The hardest character to draw is Sophie, being in that young teenage girl phase where she is just developing her figure. Too far and she looks 16, or 18, and not enough and she looks 10 or 12. Really its a fine line as some teen girls looks 16 at 14. I do try and do a lot or research and google to get images of girls around 14 years old, especially for the fashion. I really try and make her dressed as a typical modern teen not something out of 1970, though you'll be surprised how much fashions do retro in some things. I know maybe the old time readers of the strip object to things like change or the change of a character like Sophie into a teen, smart and sexy without being overt, but otherwise the strip becomes a relic and unrealistic for me to draw. Abbey is the next hardest to draw as she is this rich gal, a business woman and slightly conservative, so I also do fashion research and I kind of model her on Morgan Fairchild and in a way think of this strip as a sort of like a cross between the Rockford files and Dallas.I could never figure out the hairstyle Harold LeDoux drew her in all those years, but looking at Morgan Fairchild's hair gave me something that worked. It works for me, I can understand it, and if I can understand it I can draw it. 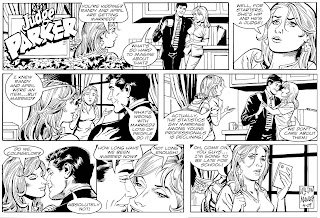 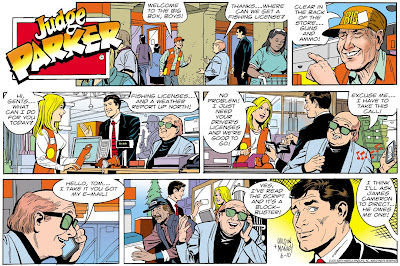 This week's JP Sunday...
Posted by Mike Manley at 4:15 PM No comments:

Over on my Michael Cole Manley blog I posted about my talk I gave at the Philadelphia Sketch club last Friday.
Posted by Mike Manley at 4:04 PM No comments: 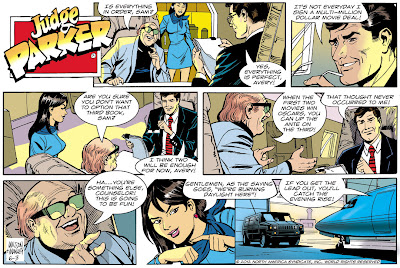 This week's Sunday Judge Parker
Posted by Mike Manley at 1:30 PM No comments: