The DPC on Plein Air Collector 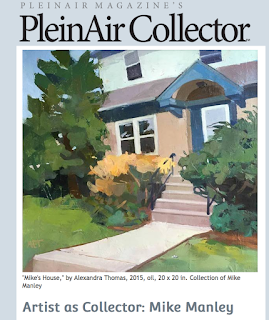 A nice article by Bob Bahr on Plein Air Collector featuring a small collection of the paintings I own by friends. I discuss their work and what i like about each painting and painter. 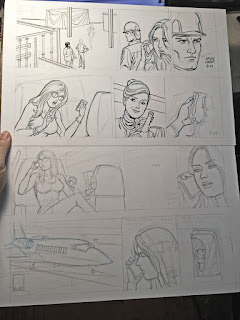 A shot of last week's dailies in progress on the strip. Godiva may be gone off to film, but she's not out of the drama. This is a doozy of a storyline having lasted a year in my life but only a few days in JP time. The trolls on the message boards are having a fit, but they always do, and don't count as real fans or readers--if they are unhappy, that means we are doing things right--never make a troll happy! Got some very nice fans mail the last few weeks about my work on the strip from some long time JP fans, which is great. Some have been reading it since the 60's---that's a real life long fan!
Posted by Mike Manley at 10:13 AM 1 comment: 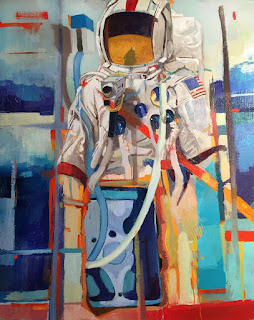 This new piece is another collaborative painting between my friend Alexandra Thomas and myself. We have do a few pieces like this before and Lexi has a painting of mine now that she is working on. You can see another Here. I have another painting of her's in my studio that I will also work on soon. I find it a great opportunity to play and takes risks and to also merge and let of of your ego as well when doing this type of painting. I have no idea what Lexi will do nor does she have an idea of what I will do. It took a few days to look at her painting on the easel before the idea of adding the astronaut came to me and I figured out how I wanted to merge him into what Lexi had done.
Posted by Mike Manley at 12:30 PM 1 comment:

A snapshot of me working on an upcoming week of the strip. Studying Alex Toth for some ideas on simplification. 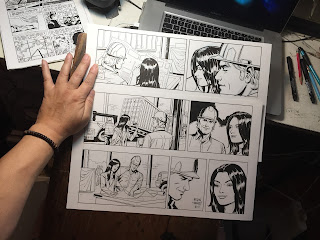 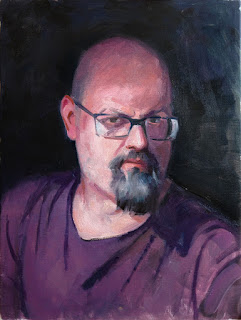 A recent late night alla prima self portrait 12 x 16 in Oil. It's always good to keep the hand in painting even when i have heavy comic commitments ad I am by far the cheapest and easiest model to use.

The First and Best Critique I Ever Had

Unearthed from the archives of shame ( i.e., my studio) I came across my submission that I sent to Comley Comix, who published Captain Canuck in the early  late 70's-early 80's. Through the fog of nearly 35 years I am trying to remember how I came about doing the samples, getting the story, etc. I don't remember if they had a tryout or I came up with the story on my own.

I had just graduated from High School and was really trying to get into comics, going to cons and showing samples. I might still have these original pages someplace in the attic, I'll have to check. I was still living with my parents in Ann Arbor and working/dreaming towards my future career from my bedroom.

Anyway the amazing thing to me was getting this gracious and informative reply and crit back from George Freeman and Jean-Claude St. Aubin only a few short weeks after I sent the samples. Those were certainly different and more personal times, the industry was smaller and in certain ways the same way it had been for 40 years.

I am posting this to also show the perspective student, the up-and-comer cartoonist out there how I started ( and sucked) and how the best artist are the giving kind like George and JC, who took time out from their busy schedules to give me, then a nobody, a great crit! What a gift this was.

I poured over that thing a zillion times---every thing they said was of course true! Unlike now when there are a zillion books and schools giving you the how-to on comics and cartooning--back then there were none available to me in Michigan. I lived too far from new York to apprentice, or go to the Kubert School. There were also no cons every weekend like today, only maybe 2-3 times a year. I hadn't even been to Chicago or San Diego then...so sometimes you'd go to a con and there would be no artists to show your work to.

I always think of this crit when I teach or give crits at cons or in class and how helpful it was, even it took me a few more years to break in as a pro---but my work improved a lot just from this feedback.

The part that was really the most true was about not being myself, a thing a lot of young artists struggle with. I think my natural ability to be able to mimic styles as well as liking a lot of different artists contributed to my artistic schizophrenia. The young artist wants to emulate and be their art heroes---its so natural. I might still suffer from some of that today as I have worked in a lot of different styles and projects.

I think for some, they only have one way or a very clear way of working from the start, but I didn't. I did feel a bit self-conscious and stiff on this and it showed---thankfully both George and JC saw something there---enough-to give me a great critique instead of just tossing it in the trash---where it likely deserved to go.

I think I started another set of samples but if  remember by the time I was working toward finishing them Captain Canuck was canceled--what a drag!  I always loved George's art, he also did the great Jack-Of-Hearts mini-series for Marvel and some great DC Batman stuff. I have reminded him of this kindness on his part and thanked him for what he did for me when I met him in person many years ago now.

So feast your eyes upon early Mike Manley art: 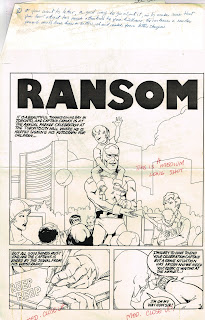 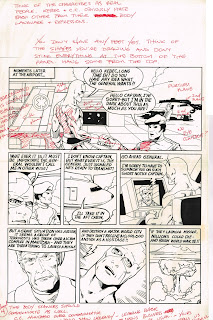 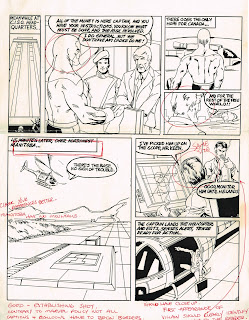 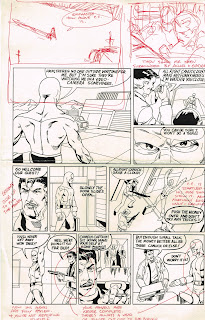 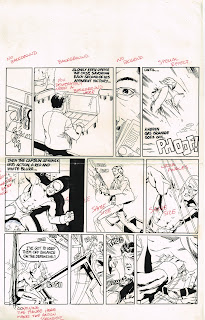 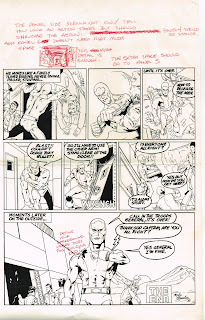 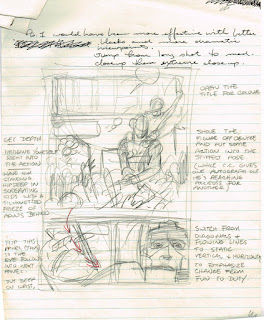 George's sketch relying out my splash 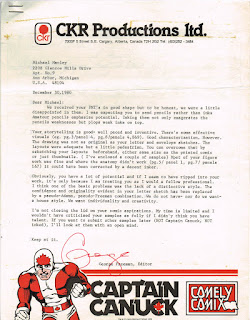 George's letter above and Jean Claude's below 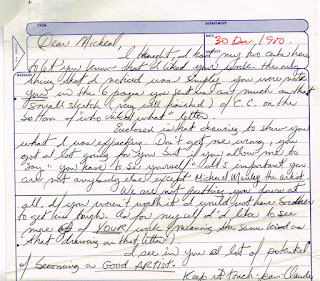 My letter art  that they both liked more than the art in mu samples---remember always be yourself--whatever that may be. Never give up on your dream, but also be serious about them too! 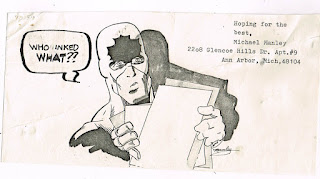 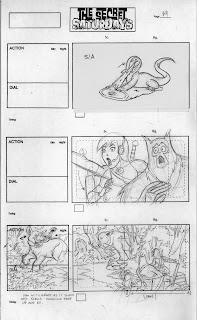 Digging, digging, digging....and more digging---or rather sketching into my imagination for ideas for a new series of paintings I want to embark on. While I'm digging through the studios at home and rearranging things, getting rid of clutter ( old paintings and 7 years of studio build up from my home as well as old school studio) I am digging into my head to come up with some new concepts or ideas as paintings. Here are some sketches from today's lunch break.

I want to do figure paintings for sure and I'm working out lots of thumbnails and roughs in my sketchbook. Its like trying to draw a dream in a way, and it might be a long process till I finalize the concepts and hire models or maybe even work from my imagination or Google. Hiring models is always somewhat problematic as they come and go and when you find one who's great you really want to work with them for a long time.

So far nothing yet, I feel the pressure in my head for something I am not quite getting yet, a dream thats out of focus--like an oil well tapped  and stuffs coming out, but so far no oil, just muddy water...but it will come. I have plenty of paper and pencils to find it!
Posted by Mike Manley at 3:49 PM 1 comment: