Interview with me in the News Journal

The Delaware News Journal is running an interview they did with me in their Home and Life section today.
Posted by Mike Manley at 10:04 AM 3 comments:

FIGURE DRAWING Back in Action

I finally really got back in the swing of things this week with figure drawing. I still feel that the few weeks of did hurt me a bit and weaken my momentum though. But I keep at it dispite my frustration with myself and what I do and the way the class is setup with the lighting, though this week was better. I think I want to really do longer pieces but would alomst prefer 2 hours of ten minute poses to really get loose. I was also trying in the last two pieces to work less with line but tone, edges as they were both 20 minute poses. But really I hope to start very soon, maybe next week on a series of long term drawings of figures. I think I'll start with friends first. 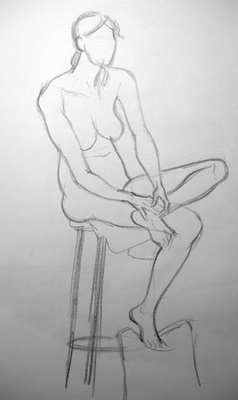 The drawing above was done straight without any underdrawing, I started with the left shoulder and drew "around and into" the figure as a continueous contour drawing. You can see how you can blow porportions and get distortion quick, yet there is something I really like about this try of drawing dispite that. 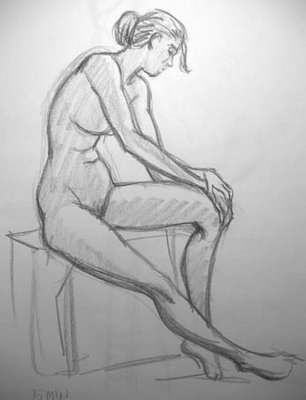 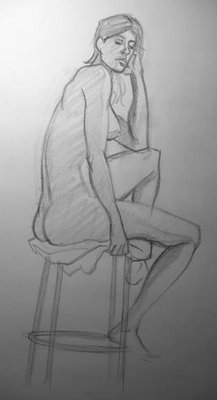 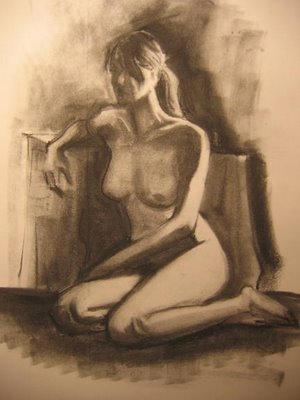 In these two drawings I was dealing with tone mostly...I needed more time to refine things like the cast shadows, reflected light etc., but this was all that time I had. I'm trying to push myself to rely less on just line, something I am so used to working with because of my daily job. 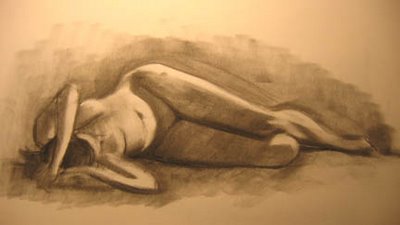 I think Echo did some really nice drawings this week, she's been using some Vine Charcoal, we posted some over on her Blog.
Posted by Mike Manley at 7:48 PM 3 comments:

Hey all, it's been a long time since the last blog here as I have been traveling and swamped with work until the last day or so. last week I was at the Consequential in Memphis, the home of Elvis the Pelvis. I had a great time as did Echo, what they say about Southern hospitality is true. I want to thank all the fine folks who helped put on the con and Cartooniversity, especially Dave Beaty and Micah Stewart and Dave's family. Dave and Micah do a cool comic called Bushi Tales. Micah was such an awesome hostess, she spoiled us too juch!

I also want to thank the Mid-South Cartoonist Association: Lin Workman,Antone wade, Kevin Williams and an extra-special thanks to Adam Shaw and his with Penny who hosted a swell B-B-Q dinner at their beautiful house and for hosting a really cool gallery show at Adam's studio that featured work by Bret and myself as well as many other local artists. Seems Memphis is yet another up-and-coming art center.

Bret and I at Shaw's gallery.

The only costumes I saw all weekend...

Another one of the gallerys in the up-and-coming area.

And the band played on..

Bret hobnobed with Adam and the other artists

A cool spooky pic of Bret.

A Flash skecth I drew.


We also got to meet several other animation and comic pros like Mike Norton, Greg Weisman and Earl Kress.

Everyone was so nice and even wanted to take both Echo and I around to places like Graceland, but unfortunately I had to pass on any tours and finish a rush-rush storyboard and had to work right up until Friday night in our hotel room. Echo helped me tighten the job up and Bret brought over his drawing setup as he was also trying to finish the end of his huge Red Wall graphic novel, so we all had fun working together late into the night. But Friday we attended the gallery opening and then walked the area to visit some of the other gallerys.

Some cool snaps I took in one of teh gallerys of Bret, Echo and the musicians.

My fave was this gallery that was all candelight with a group in the back playing space/trance/world sorta'music. Adam had a group come play at his studio but I forget who they were, but they were a bit too loud fer me so we headed outside.

Bret and I gave our panel of drawing for comics on Saturday, even running over our time as we had a pretty packed room of eager to learn cartoonists in attendence who at the end of the weekend got a nice certificate stating they ahd gone all the way through the program. There were other classes on writing, painting, figure drawing and more. the only downside was that attendence was pretty light and I felt bad for teh gang who worked so hard to put this on. It was a really great opportunity for an aspiring cartoonist/writer to get an in-depth, one-on-one with a professional.

I hope they do this again next year and have a much bigger turnout. Memphis has good eats, plenty of BBQ, it's the land of meat and smoked meat, but don't try and get a cab, jebuzzz, it took 45 minutes to over and hour just to get a cab. Weird.

Echo and I returned to Philly and I was back teaching this week and finishing up a bunch of business that got pushed back or delayed due to all the traveling of late. We even went back to figure drawing this week, but the stuff I did was pretty crappy, i was so tired and unfocused, I look forward to doing more next week when I will have had some rest andcaught up on my sleep. It was three cons in just about a month, starting with Baltimore, but that's it until next year. I think the first show will be the Feb NYC show at the Javitz.

It's mid terms at school and I can see the end of the year rushing up.

I turned 45 yesterday, holding off on the big celebration till this weekend but Echo sang to me as I blew out the candels on my pumpkin pie, as I am not a big cake fan. year 44 was awesome and I image 45 will be awesome too, I don't feel any different than when I was 25 except maybe I need a new perscription for my glasses. I notice the close vision is good, but the distance is a bit fuzzier and not as sharp. oh well, Lens Crafters is cheap.
Posted by Mike Manley at 6:58 PM 15 comments:

Back in Philly from our trip and today was the usual busy day back after traveling. Tons of mail to go through, mostly junk mail, phone calls to catch up on, doggies to fetch home from the kennel. I also had to get ready to teach tomorrow and get back to work on my storyboard for Growing up Creepie which airs on the Discovery Channel. I have to thank Matt and Joe for putting on a swell con and being such graciuous and hospitiable hosts for that weekend. I understand the show was a bigger than expected success and judging from the crowd on saturday everyone seemed happy. It was the biggest show in the Phoenix area in a long while and they already have the next show in January coming up fast. Man, there was a ton of people dressed up all weekend. I snapped a few pics.

Echo and I had a good time and it was great to get to hang with Terry Austin, Ron (Saved a worm) Garney, Jimmy Palmiotti and Amanda Conner, Justin Grey, the Dude and more. I will be c atching back up on blogging this week and I'll have more pics as will Echo over on her blog. 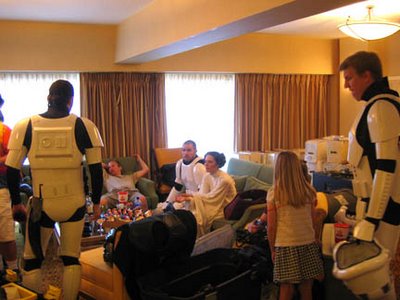 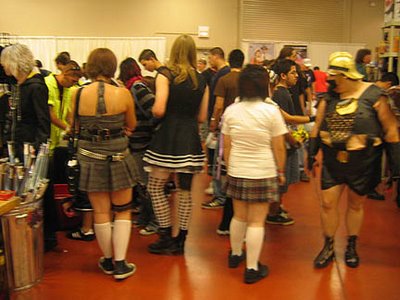 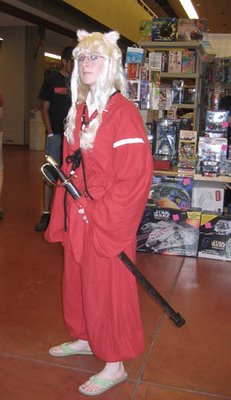 A Darkhawk Sketch done for a fan 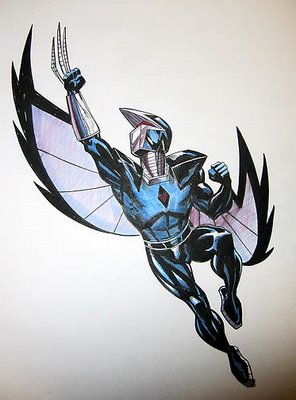 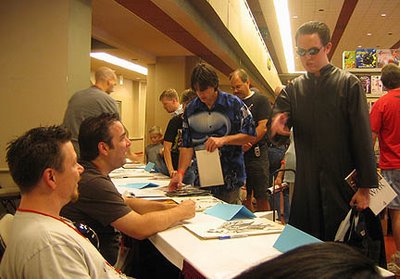 The view from our hotel...ahh, palm trees. 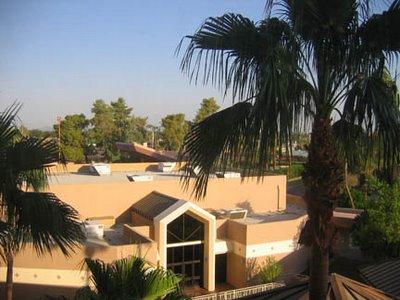 One Piece and one thing I never want to see again! 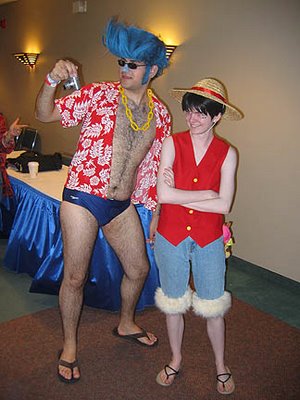 Mama Penguin and her son! 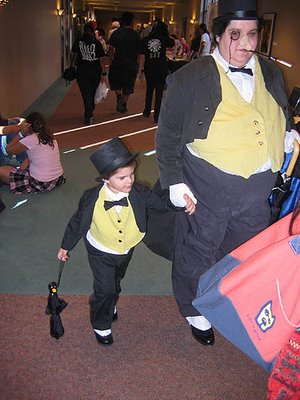 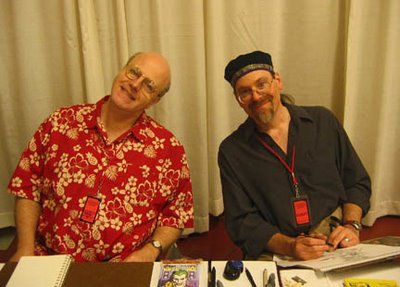