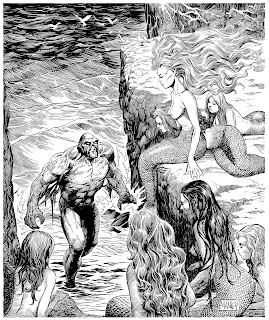 October has come and gone and that means that the Inktober event has come and gone till next year, however my ink drawings or Wind Downs will continue.  I was only able to get 14 Inktobers done this year due to drawing both strips, but quality over quantity--right? My fave was this one above of the Swamp Thing and a bunch of mermaids. I'm such a big fans of Bernie Wrightson ans well and Franklin Booth and Nestor Redondo, so I got to blend my love for those artists into this piece. 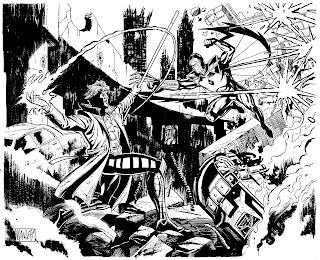 One of my last commissions on the list so my commissions list will be opening back up in a week or so. 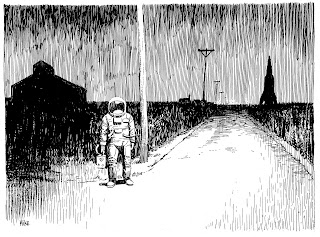 One of the Inktobers that jumped into my head while I was working on another one. Funny how doing one drawing can suddenly generate another image that bubbles up from the depths and seems to just erupt forth and demand to be drawn.  I'd actually like to do a painting of this idea. 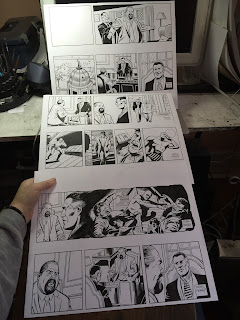 And while all of the Inktobers were going on I finished my first Phantom Story and have started the next The Phantom Stamp. This is the first one where the writer Tony was writing for me instead of the late Paul Ryan. I'm still on my learning curve with the strip as I'm not only drawing new characters but old previously established ones as well. The Phantom is a very intense strip research wise. luckily I have help from Tony, Terry Beatty, KFS and even some fans. 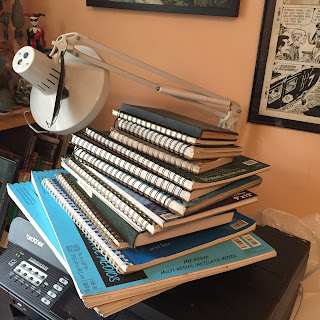 I gathered up a pile of some of the sketchbooks I have kicking around in the studio. Some almost full, some with dregs, some really decades old. They are much more important to me now than when I was younger. they are really me, raw and unchecked and so much essential to my process now as an artist. I've always had them though back in the late 80's and 90's I didn't sketch as much nor in the vital way I do now and i sometimes regret that. I was working so hard back then and not taking as much time for personal development. Something that serious started when I went back to art school. 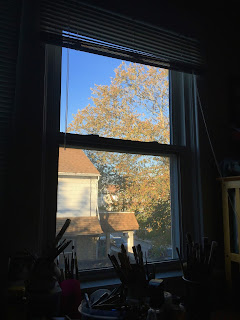 My biggest regret is that this fall I haven't painted like I wanted. But then making $$$$$ is very important when roofs have to be fixed, furnaces need work and taxes need to be paid. I did sneak out with my buddy the other day to do a quick rush little plien air about an hour before the sun set. It felt so good!! 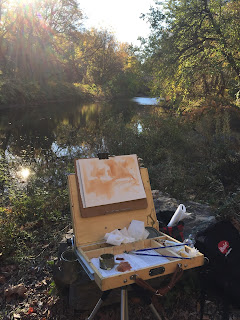 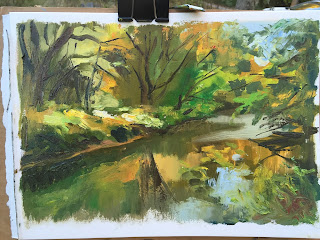 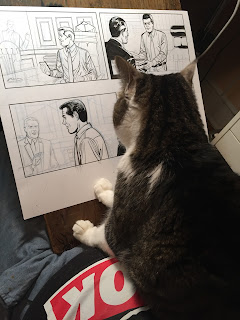 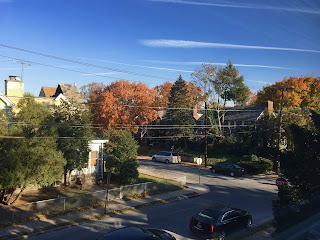 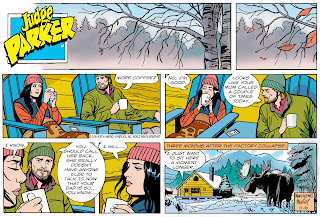 And this Sunday we jump months ahead on the Judge Parker strip as Francesco really starts his tenure going forward after sort of wrapping up or bundling things from Woody Wilson's long, long, long story of Neddy's factory. I gave Ces some ideas of what I'd like to do tone wise with the strip. I'm for a little more adventure, a little more like the old old Judge where Sam was more like Jim Rockford.
Some others are being writtenn out or even perhaps dying off. Like real soap operas you have to keep the churn. I hope to never seen some characters again, or for a long time like Rocky and Godiva and the biggest change is in being able to draw seasons, like this Sunday's strip.

This is something both Terry Beatty and I really desired when Wilson was writing both strips but never got to do. But Terry has been doing that on Rex Morgan and I'm getting to finally do it on the Judge. I'm sure judging by the Snarkers they will hate this as much as the last writer's stuff as they just have to hate with their small lives and babymen-Trump-like hands---but oh well. The 10 million viewers and readers on the Comics Kingdom portal seem to like what we are doing and I've been getting some positive feedback. But you can never ever write to or for fans, thats a noose around the neck. You have to write for yourself first, entertain yourself first to do a good job. Soon Sofie's fate will be revealed, but we can torture our readers in a good way a little longer. I don't go often to the CK board, but its funny to see just how wrong the trolls are about plots, and motivations and their ideas are a bit amusing when not rotten. Readers are too impatient still and this strip will move faster now that it has, but it will still never be a Marvel Comic or a movie. I'm sure if we ramped up the strip like that the longer time readers would not like that pace either.
Posted by Mike Manley at 9:40 AM 5 comments: