I was very saddened yesterday to learn from a fellow cartoonist that Eduardo Barreto passed away from a long illness. It's a great loss to his family and to all of us who worked with him and were big fans of his work. Eduardo Barreto was the artist I took over on Judge Parker two years ago when he was also slowed by illness, and like everyone else I came to know Eduardo Barreto's work first as a fan in the 80's when he was working on books like Superman and Atari Force for DC Comics. I came to become great friends with Ricardo Villagran at the time and through him I met many cartoonist from Argentina and south America like Jeorge Zaffino. 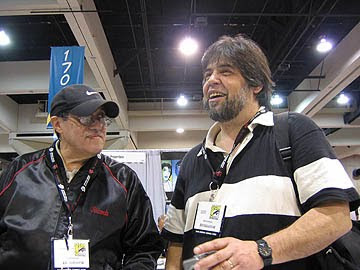 I got to meet Eduardo only one time, at the San Diego Comic Con along with my great friend and his one-time mentor Ricardo Villagran whom he assisted when he was younger. It was a good meeting and he was a very humble man about his work for a guy who was so talented and as we talked he very complimentary about my work. As a pro I was lucky enough to get to work with Eduardo when I got the chance to ink an Elvira job he drew a few years back a,one of the highlights for me in my career. His work was beautiful and professional and a joy to ink. You really get to see how good an artist is when you ink his work--and he was great! his work was so smooth and lush, so flawless you could have just shot the pencils!

Eduardo was one of many great cartoonist in a long line who hailed from South America, from the great Salinas who drew the Cisco Kid to Garcia Lopez, Luis Domingez, the Villagran Brothers, and another of their one-time assistants turned pro, the late Jorge Zaffino. These artists like Eduardo were all top flight draughstmen and gentlemen. When through circumstance I came to take over from Eduardo on Judge Parker when he became to ill to continue, I again became a fan of his work. He really hit a home run on the strip during his time on the Judge, and he set the bar high.A high bar for me or anyone to follow as soap opera strips require a lot of tough drawing and domestic set-ups that don't initially lend themselves to the drama of superheroes which both Eduardo and I cut our teeth on. He was the type of artist who did the hard things well and the great things great, his dynamic figures and inventive layouts, sexy women, bold blacks and brushwork added a dramatic splash to the often tepid comic page and revitalized the strip, he will remain an inspiration and he will be missed.
Posted by Mike Manley at 6:19 AM

TOTALLY AGREE, Mike! Eduardo lifted Judge Parker to new heights when he took it over and seemed to draw it effortlessly, with great beauty. So sad that his life has been cut short at 57 and selfishly we will never see any of his great draftmanship in the future.

Condelences to his family. RIP, Eduardo.

Great post, Mike. Those guys n Argentina are a main reference for those to try to work in comics. (with Alberto Breccia, the inmense Jorge Zaffino, Garcia Lopez ,Barreto, Villagran Bros) They are the legacy of the golden age of the 60s Argentinian comics. (Eduardo was from Uruguay but the first steps in his carrier was made in Argentina). Is really sad, he was so young...but also because you cannot see many with his talent and technique in the field.
RIP, Eduardo, and Thanks.