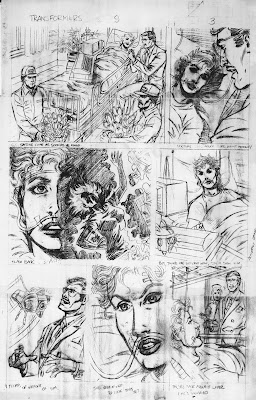 While going through the archives here I came across copies of my pencils for my first Marvel Comics Job circa 1984. It's ironic in a way, that my first job at Marvel would be a robot comic as the first job I was offered at Marvel on my first trip to the offices in 1983 was a comic to be inserted into a toy, but since I was still living in Ann Arbor at the time the editor didn't feel comfortable giving me the job. The next summer I landed a gig helping out on Robotech for DC and this lead me (samples in hand) back to Marvel to try and land work. 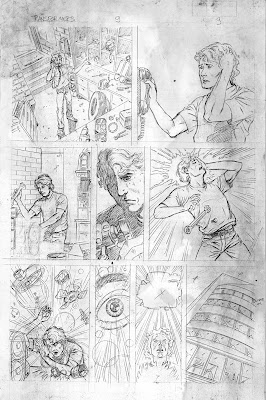 I ended up getting an issue of the Transformer to do since the samples were of that type of work, yet I really didn't like the show or want to draw tat stuff. but a job is a job, especially in the beginning so I said yes, then struggled to draw the robots between using the toys ( which I bought) and the model sheets for the show--which really had nothing in common. I had just turned 23 at the time I did this job and had just moved to Philly. 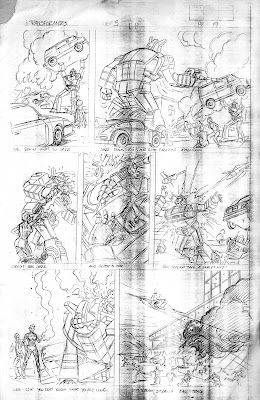 The job was hack inked by just about anybody in the bullpen who could hold a brush, so suffice to say my first job at Marvel left a kinda' bitter taste when it hit the stands. I was happy to have my first job but sad that the job was given the "Marvel Hands" ink treatment. But that was how comics were done then,I was luckier than my buddy Bret Blevins who had his first several jobs ruined by having them inked by Vince Coletta. Comics was a simpler and maybe more fun business then, less pressure to earn a zillion bucks an a lot more opportunity and variety of books for an artist, especially those trying to break in. these days it seems those types of books don't exist at the big two so now you have to go the independent way, maybe an Image book and probably plan on not making much if any money for a while. I've know a few guys who are now at the big two who came in just like that.
Posted by Mike Manley at 1:14 PM

Impressive work for 23 Mike! At a distance it almost matches your work now, though a closer look shows all you've improved on.
You handled compilcated perspective and like I said your basic draughtsmanship is good.
Imagine if you could have gotten Rubinstein or McCleod on it! Any problems would have disappeared.