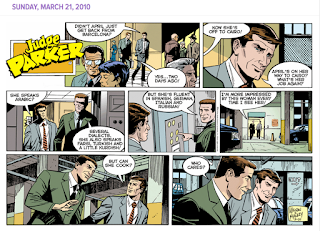 We did however age her the most of any character in the strip to make her a more modern teen girl. The strip has been pulled and put back in some papers, it seems we are lucky to have some real loyal fans who bombard the papers if we are dropped of fall victim to an editor who tries to nix us from the comic section. Its a yearly fight for all of us comic strip makers as it seems the newspapers are always trying to dump the strips, or even worse sometimes, shrink us down to the size of a stamp. But the Judge still has is white streaks in his hair--so here's to maybe another seven years!
Posted by Mike Manley at 3:53 PM

Congratulations, Mike. What an incredible run you have heard, turning "Judge Parker" into the must-follow story strip in the paper. Nobody else comes close.

Actually you are celebrating your 6th anniversary since you started in 2010. The stack of originals is closer to 2190 plus 2 for leap years. Still a remarkable run.

Stunning, to say the least.

All the very best, Mike.

Many congratulations for the 7th anniversary! Really liked reading this post. I will be hosting our 6th wedding anniversary next month and planning a grand party at our favorite venue NYC. Hoping to have a great time on our special day.