Saturday was Free Comic book day and it was another huge success at Captain Blue Hen. Joe Murry the manager said they did 50% better than last years with over 1500 customers through the doors! All I know is that once I sat down, except for on bathroom break I drew non-stop till well after 5, almost 6pm. I lost count of the number of sketches I did.... 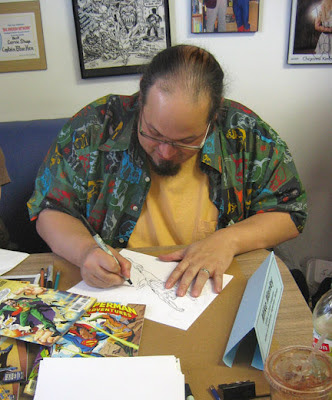 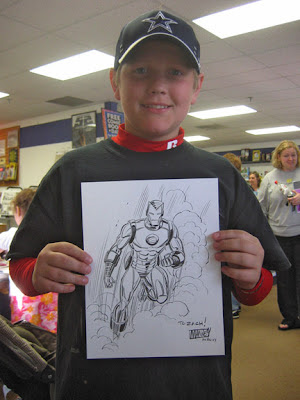 A pic of a young fan with an Iroman sketch I did. I think Superman and Spider-man were the most requested sketches. 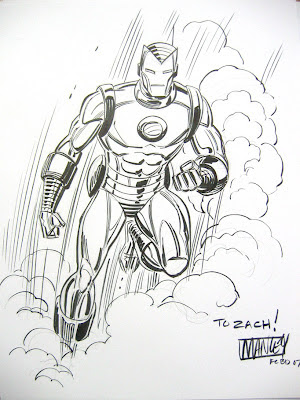 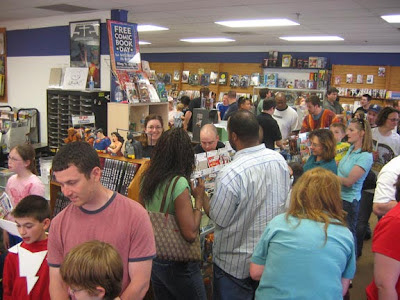 It was standing room only and everyone had long lines, Scott, Jamar, and Rich. Echo did free caricatures and even jumped in drawing some cool Jokers and Supermen. She is really good with kids, some of whom are very shy to sit and ask for a sketch. Our pal Kelly stopped by as did a few former students Claire, Brian and Todd. 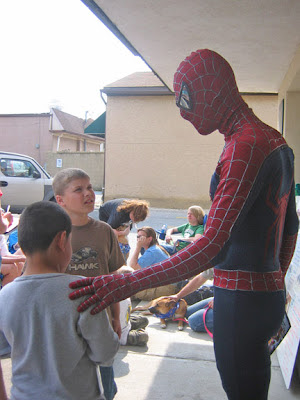 There was a constant parade of heroes showing up, Spidey, Batman, Batgirl even a few Star Wars characters, I only saw Spidey as I was surrounded by fans the whole time. there was a group who was there also with pets for adoption, they were so great, I love dogs and there were a few I reallly wanted to take home. 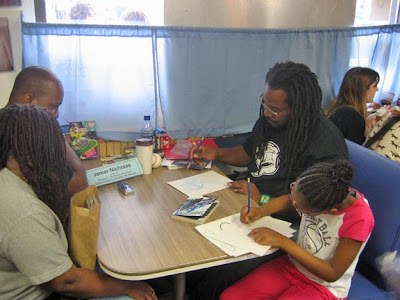 Jamar drew like a madman, he even had whole families get sketches. 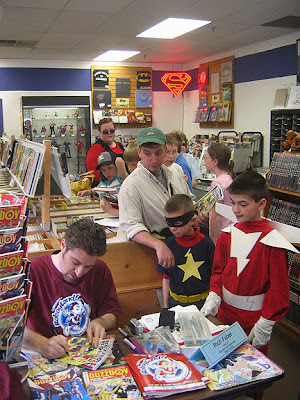 Rich even had fans dressed as his characters! 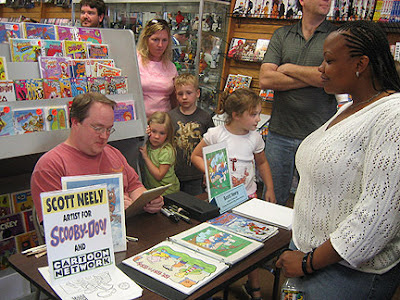 I think Scott may have been the bussiest of us all as Scooby is so hugely popular.
It was a great day and I look forward to doing it again next year. I like drawing sketches for kids and familes, I wish the hobby of comics could return to this more than the babymen who frankly have ruined much of the business to me. hats off to Joe and the great staff at Blue Hen for doing an outstanding job. If we had 5000 Joe Murry's the industry would be saved and much broader and better. This kind of event shows that people still like comics, if there was a way to expand on this more than once a year it would be awesome.
Posted by Mike Manley at 3:03 PM

You're a drawing MACHINE!! What a lucky kid with the Iron Man illo!

It was a good day. Wish I hadn't been in such a sad mood though. Thank you to you and Echo for perking me up a bit! It will be good for me to get away from that other stuff for a few months.....;)
I'm glad you guys had a good time. There was a very good turn out and the people were good. But there was that one kid. Very bright and not in a great way, I'm afraid. Gotta take the bad with the good though, and there seemed to be a very upbeat vibe at the place all day.