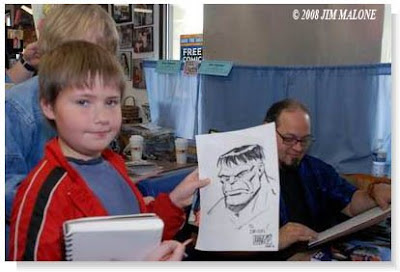 this last Saturday was the annual FCBD event at Captain Blue Hens in Newark, Delaware. The event hosted by Joe Murray and is awesome staff is a really great event for the entire family. They even had the local no-kill dog kennel out with a pack of awesome pooches looking for homes. Of course there were plenty of costumes heroes on hand from Batman to Spidey and Darth. However I didn't see much of the unfolding events as I was swamped by commissions along with my table buddy and cartoonist extroadinare, Jamar Nicholas. Besides giving a half-hour chalk talk to a group of kids on how to make characters out of simple , fun shapes, I sat a drew a zillion sketches, like the one of the Hulk the young man is holding above.

It was a fun day, and even though I think maybe it was a tad slower this year, it seemed busier at times, the entire store a mad crush of families and kids getting down with comics--even if for only one day. Many kids were getting their first comic--little seeds that may grow some into this industries future, if it doesn't blow it.
Posted by Mike Manley at 11:21 PM

Mm, looks like you give good con-sketch. Love that old-skool Hulk basin-cut