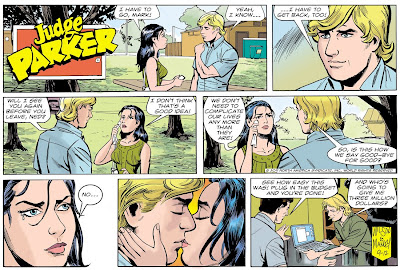 This week's Sunday strip
Posted by Mike Manley at 3:01 AM

How did Neddy's blouse turn from olive green to light pink? Sunday it was green before she began to kiss Mark goodbye, and Monday it was pink as she broke the embrace by the car.

Which begs the question, Mike, why can't the fine folks at Reed Brennan look at your Sunday strips, which are several weeks ahead of the dailies, and match up the colors?

My guess is they have a large volume of work and attention to detail is not at the top of the priority list. Perhaps your Editor at King should step in and issue a little mandate. :)

One could make a case that the daily comic strips are not intended to be in color. Only the Sundays. But, I understand where now some papers use color on the dailies and of course they are available online (in color). It does seem rather lazy (and lame) that the King Features color service can't seem to match up what the creator, in this case, Mike, wants the color of the strip to look like.

CC is right, I only color the Sunday strip and someone at King colors the dailies. I don't know who nor have I talked to them. Not every paper runs them in color either, my dad clips the strips from the Detroit Free press and some dailies are in color, but not all, and they don't carry the 3 tier Sunday, on the 2 tier version.

I suppose I could look into it, but right now I am working hard to keep up to speed on the dailies as it is. I think it's wrong to assume the person doing it doesn't care, I'm sure they do.

The comic strip biz isn't what it used to be but the fact you can see the strips on-line is a bonus as many cities don't carry the strip at all. No Philly paper carries it.

How about we mount a campaign to the Philly Inquirer or Daily News to get the Judge in Mike's hometown paper? I think sister comic Rex Morgan is in the Inquirer.