Jack Kirby and Me 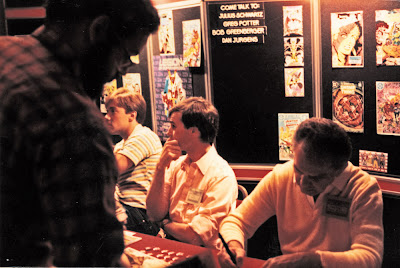 I came across this old picture yesterday, it's from the Chicago Con of 1984 when I met Kirby for the first time and he was and still is one of my biggest heroes. He was such a nice and gracious man as was his wife Roz. I had a stack of book that I had him sign and he might be the only artist I ever really brought a stack of books to have signed.

That was the con I went to with samples hoping to get work and ended up working on Robotech Defenders helping out Judy Hunt. that lead to more work and my moving from Ann Arbor out to Philly and I've been working in comics ever since then. You can also see Dan Jurgens in the background on the left, I would end up working over Dan's pencils about 10 years later on Superman. A lot of history, past and future in that one photo.
Posted by Mike Manley at 4:13 PM

Just saw this! That is great. I met him in early 93 when he was on his book tour for the Art of Jack Kirby.